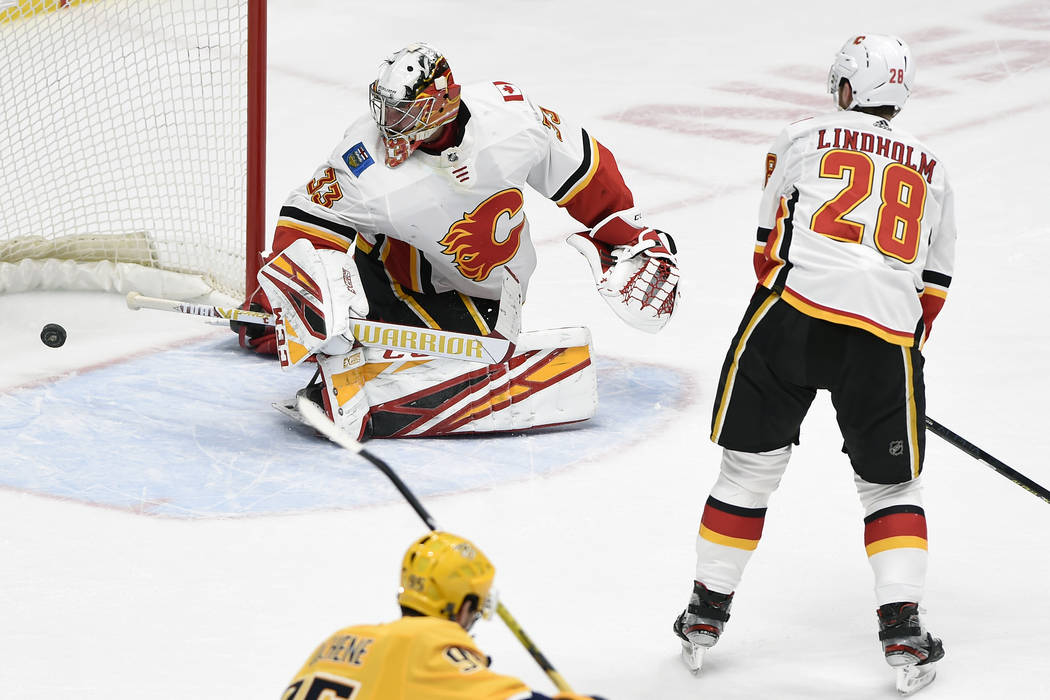 A shot by Nashville Predators center Mikael Granlund (64), of Finland, gets past Calgary Flames goaltender David Rittich (33), of the Czech Republic, in overtime of an NHL hockey game Thursday, Feb. 27, 2020, in Nashville, Tenn. (AP Photo/Mark Zaleski) 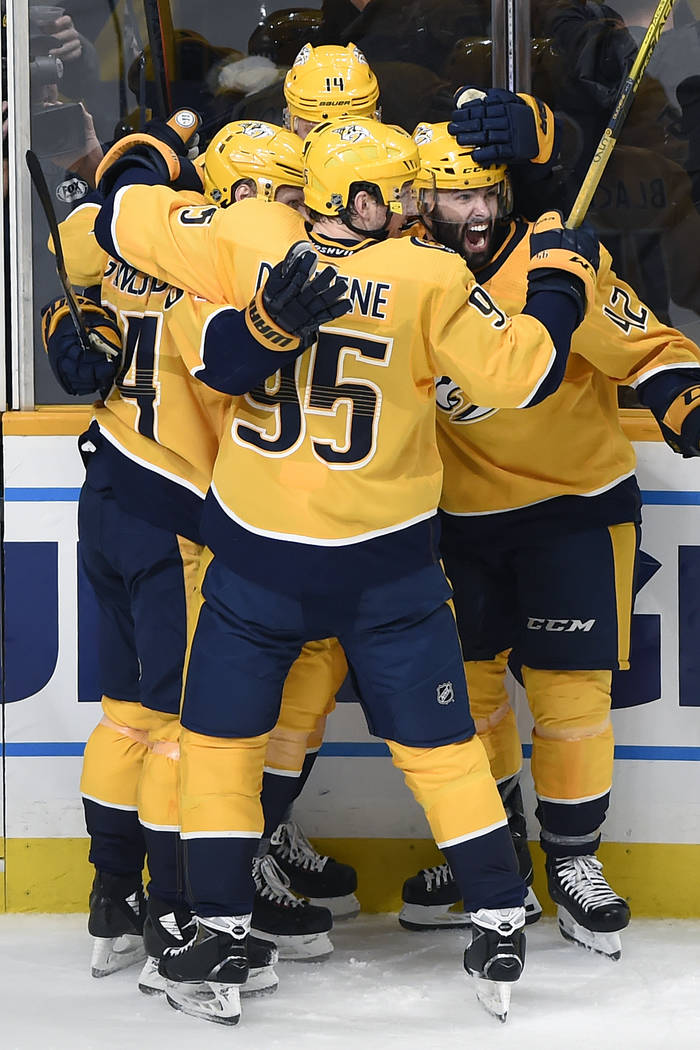 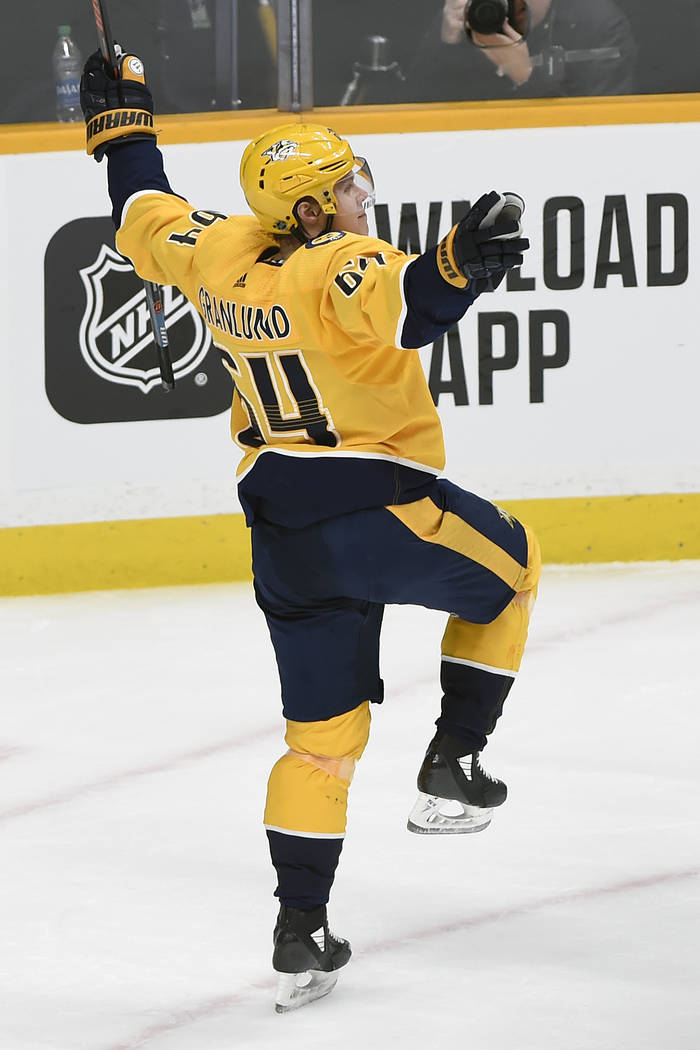 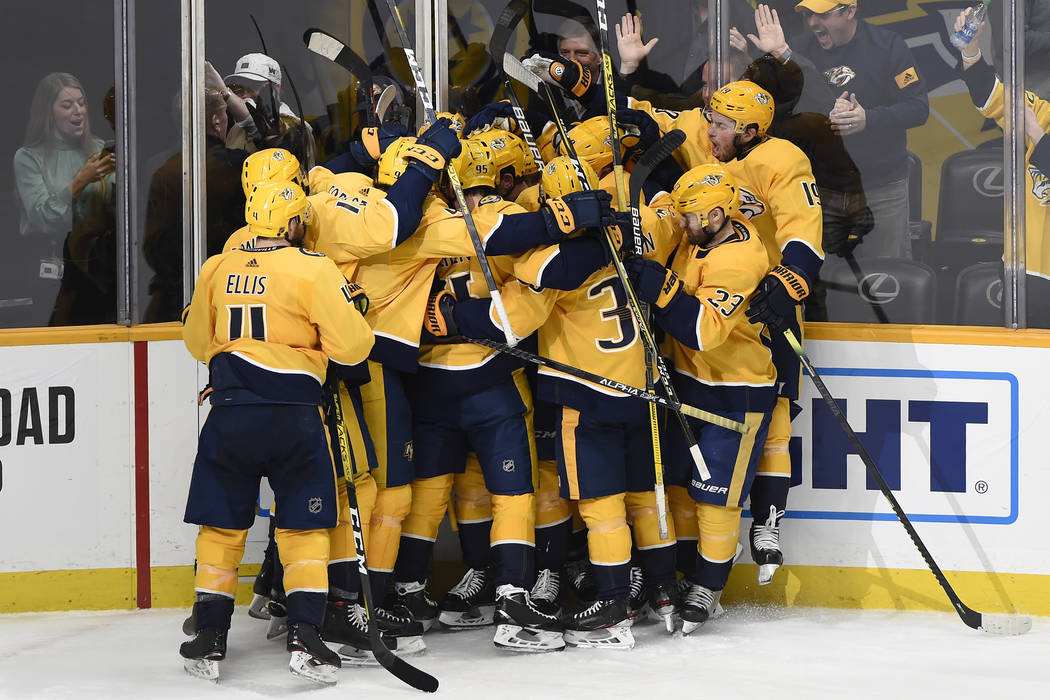 Nashville Predators center Mikael Granlund (64), of Finland, is mobbed by teammates after scoring against the Calgary Flames in overtime of an NHL hockey game Thursday, Feb. 27, 2020, in Nashville, Tenn. The Predators won 4-3. (AP Photo/Mark Zaleski)

One-tenth of a second is sometimes all it takes to sink a bet.

Here are our picks for the five worst sports betting bad beats of the week.

A nice one-two combination for bettors trying to back New Orleans as it surges into playoff contention.

On Tuesday, the Los Angeles Lakers stayed a couple of steps ahead of the Pelicans throughout the fourth quarter, but New Orleans rookie star Zion Williamson stepped to the free-throw line down six with 22.4 seconds remaining with a chance to get Pelicans backers inside the number. He missed both, and the Lakers ended up winning 118-109.

On Friday, now as double-digit favorites, the Pelicans led the Cleveland Cavaliers by 18 after the first quarter and by 22 (113-91) with 4:54 to play. Unfortunately for New Orleans backers, the Pelicans scored only three points the rest of the way.

Underdogs fail to cover in overtime all the time, but usually not when they’re up 17 with 5:51 remaining and by 12 with less than two minutes to go.

Western Kentucky’s Taveion Hollingsworth scored 13 of his 43 points in the final two minutes, including a 3-pointer to cut the lead to three with 17 seconds left. Louisiana Tech’s Derric Jean then missed a chance to ice the game at the foul line with 10 seconds left.

That put the ball back in Hollingsworth’s hands, down three. He didn’t miss, and the Hilltoppers beat the Bulldogs in OT, 95-91.

A late entry from the two worst teams in the Atlantic 10. Saint Joseph’s took control in the second half against Fordham and led by 16 with less than four minutes to play.

The Rams rallied late, but the Hawks still led by eight with less than 10 seconds to play.

Cue Josh Colon completed a four-point play with nine seconds left, then after a free throw put Saint Joseph’s back outside the number, Colon hit another 3 with three seconds remaining to get the Rams within two.

Rahmir Moore hit both free throws for the Hawks with two seconds left, but the damage had been done. Saint Joseph’s wins 73-69.

Bettors pounded the under on this Northeast Conference total, moving it from the 145 opener to 141½ by tipoff.

After a 68-point first half, the scoring slowed considerably in the second half, and the game was sitting at 116 with 1:30 to go.

The only problem: The game was tied at 58. Five missed shots later, bettors were left sweating overtime.

The total sat at 132 with a minute to go in OT, but the parade to the foul line wouldn’t stop.

DeAndre Wilkins finally iced the game for Wagner with a free throw with six seconds left to finish a 75-71 victory, but that also crushed all the under backers, including the sharp ones who got the 145 opener.

Games have been lost in the final seconds, but this was ridiculous.

With Nashville down 3-2, Mikael Granlund scored with one-tenth of a second — yes, 0.1 seconds — remaining to force overtime and kill under tickets. (Even worse, the game had been 2-2 with less than a minute to go.)

Then to top it off, Granlund scored the winner in overtime to make losers out of everyone who bet on the underdog Flames.

Remember, it’s never under till it’s over.

Nashville scores again to win it a little over a minute into OT. @betthepucks