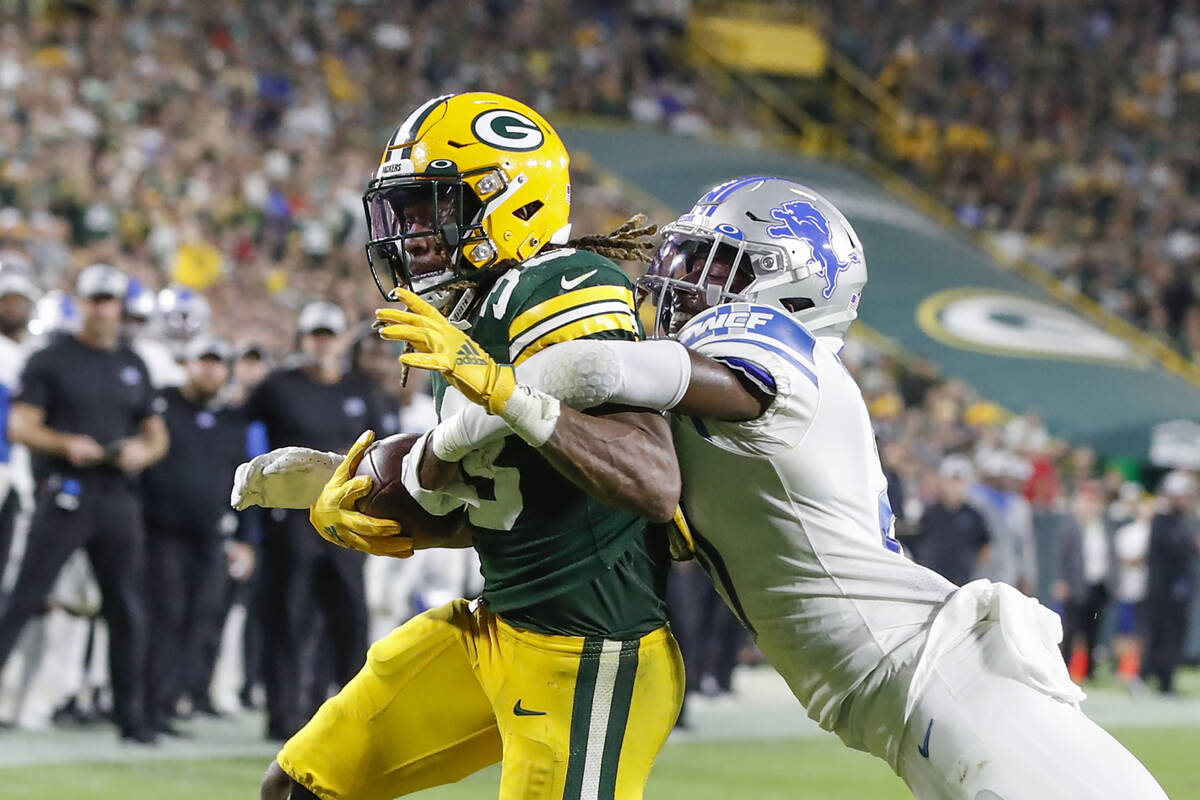 Green Bay Packers running back Aaron Jones, left, scores a touchdown as he is tackled by Detroit Lions defensive back Tracy Walker III, right, during the first half of an NFL football game, Monday, Sept. 20, 2021, in Green Bay, Wis. (AP Photo/Kamil Krzaczynski)

Don’t feel bad for the BetMGM bettor who was one win from turning $25 into $726,959, but lost the last leg of a 16-team parlay Monday night when the Detroit Lions lost 35-17 to the Green Bay Packers.

It turns out the bettor cashed out for $133,000 (pretax) before the game, BetMGM announced Wednesday on Twitter.

The NFL money-line parlay was reportedly placed with a free $25 promotional wager in Michigan, where cash-outs are an option at sportsbooks.

Cash-outs, which aren’t an option at Nevada sportsbooks, are not typically offered for wagers made on a free bet. But BetMGM made an exception for the unidentified bettor, who correctly picked the first 15 winners — including five underdogs — of NFL Week 2.

The bettor picked the Lions at +400 on the money line, which is the odds on a team to win a regardless of the point spread. The Packers closed at -600 on the money line at BetMGM, meaning the bettor would have had to come up with $720,000 to wager to win $120,000 on Green Bay.

Detroit, an 11½-point underdog, took a 14-7 lead and trailed 17-14 at halftime before faltering in the second half at Lambeau Field.

The cash-out option at BetMGM offers bettors a buyout opportunity before their bet is settled, or before the final outcome of one or multiple events on which the wager was placed. Cash-outs are available for some single and parlay bets and allow bettors the chance to guarantee winnings ahead of the final result or cut losses.

The gambler had several close calls en route to winning the first 15 legs of the parlay, starting with the first leg on Washington (-175).

The Football Team beat the New York Giants on Thursday night on Dustin Hopkins’ 43-yard field goal as time expired. Hopkins missed a 48-yarder on the previous snap, but got another chance after an offside penalty on the Giants.

The Arizona Cardinals (-190) held on for a 34-33 win over the Vikings on Sunday when Minnesota kicker Greg Joseph missed a 37-yard field goal with four seconds left.

Here are the other winning legs: