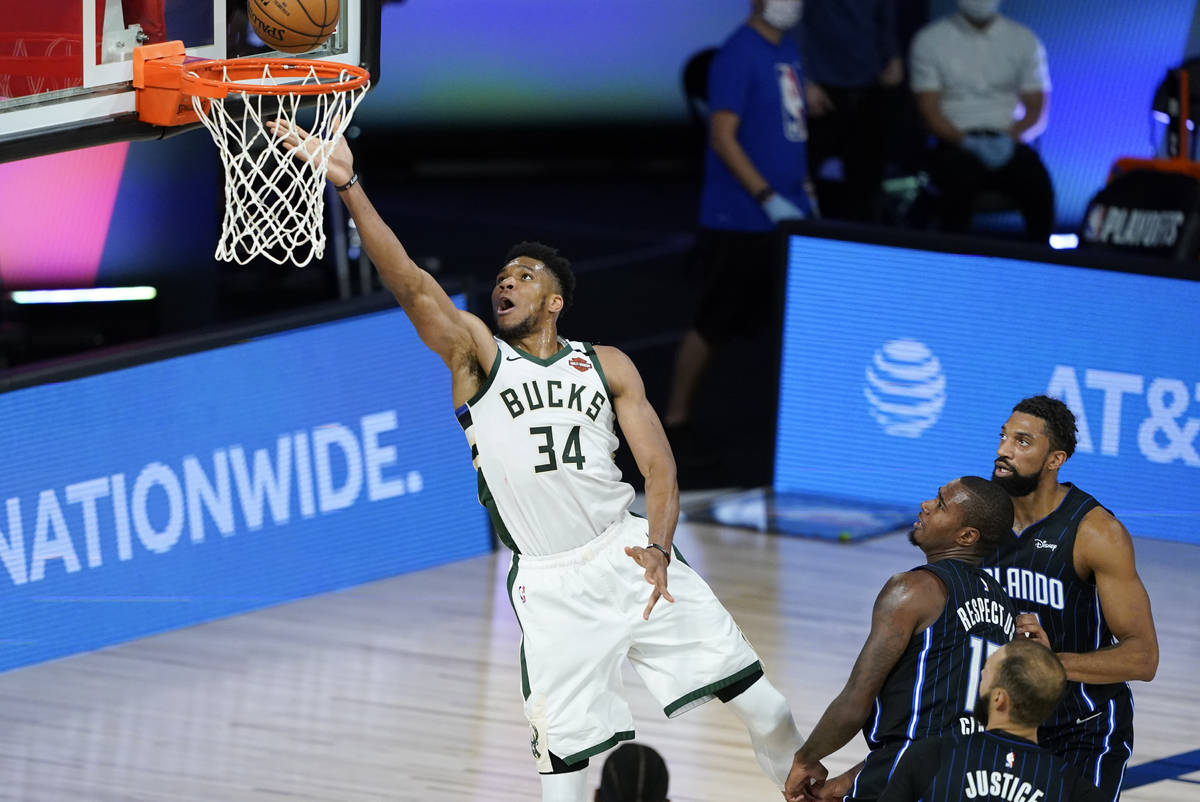 Milwaukee Bucks' Giannis Antetokounmpo (34) drives to the basket during the first half of an NBA basketball first round playoff game against the Orlando Magic Monday, Aug. 24, 2020, in Lake Buena Vista, Fla. (AP Photo/Ashley Landis, Pool)

Bets on Wednesday’s NBA, WNBA and MLB games that were called off will be refunded at most Las Vegas sportsbooks.

If the games are rescheduled, bettors will have to place their wagers again, officials at Circa Sports, the South Point, Station Casinos and William Hill confirmed.

“Gonna have to rebet,” William Hill sportsbook director Nick Bogdanovich said via text message. “Hopefully there are games to rebet.”

All three NBA playoff games, all three WNBA regular-season games and three baseball games were postponed to protest Sunday’s shooting of a Black man, Jacob Blake, by police in Kenosha, Wisconsin. Blake, 29, was shot, apparently in the back, as he leaned into his SUV, with three of his children seated inside.

Rules at most sportsbooks require games to be played on the stated date for action to stand.

One exception was the Westgate, which does not have a scheduled date stipulation for playoff games. Bets on Wednesday’s NBA games stand as long as they are eventually played, sportsbook director John Murray said. Bets on the WNBA and MLB games will be refunded.

The Westgate still had NBA futures posted and lines up for Wednesday’s postponed Milwaukee-Orlando and Houston-Oklahoma City games, along with Thursday’s scheduled Denver-Utah and Toronto-Boston games.

Lines for Wednesday’s postponed Los Angeles Lakers-Portland game and Thursday’s scheduled Los Angeles Clippers-Dallas game were off the board. Murray said that was because of uncertainty about the length of the postponement and how it could affect the availability of injured stars Damian Lillard of Portland and Luka Doncic of Dallas.

“Maybe Lillard will be back? Doncic feeling better?” Murray said via text message. “Who knows.”

NBA games and futures were off the board completely at most other sportsbooks Wednesday evening. Circa and MGM Resorts still had lines up for Thursday’s scheduled games.

Kenosha police have said little about what happened other than that they were responding to a domestic dispute. They have not said whether Blake was armed, and they have not disclosed the race of the three officers on the scene.

On Tuesday, Ben Crump, the lawyer for Blake’s family, said it would “take a miracle” for Blake to walk again. He called for the officer who opened fire to be arrested and for the others involved to lose their jobs.

The shooting was captured on cellphone video and ignited new protests in the U.S. three months after the death of George Floyd under the knee of a Minneapolis police officer touched off a nationwide reckoning over racial injustice.