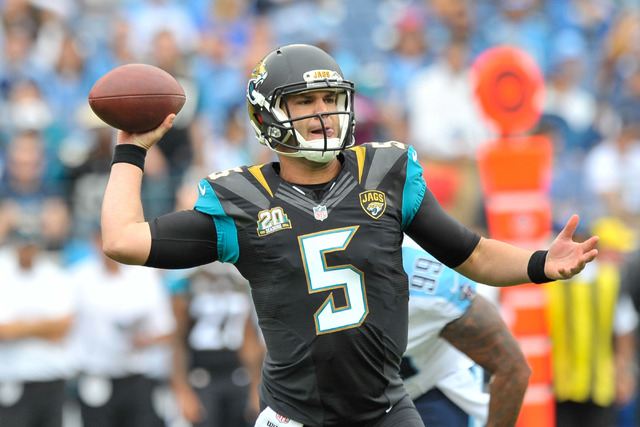 Jacksonville Jaguars quarterback Blake Bortles (5) looks to pass during the first half against the Tennessee Titans at LP Field in Nashville on Oct. 12, 2014. (Jim Brown-USA TODAY Sports) 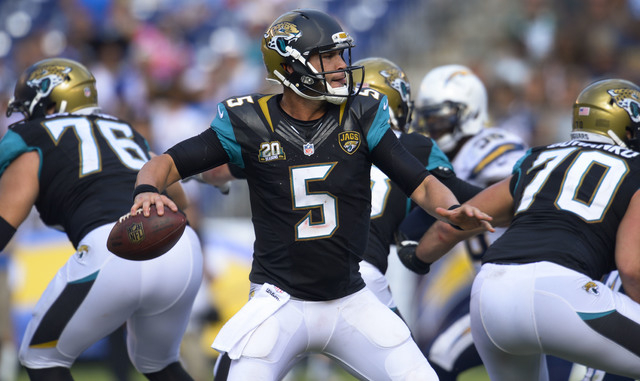 Jacksonville Jaguars quarterback Blake Bortles (5) throws a pass during fourth quarter action against the San Diego Chargers at Qualcomm Stadium on Sept. 28, 2014. The Chargers rolled to a 33-14 win over the Jaguars. (Robert Hanashiro-USA TODAY Sports) 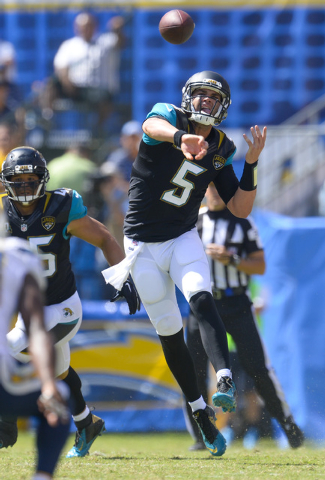 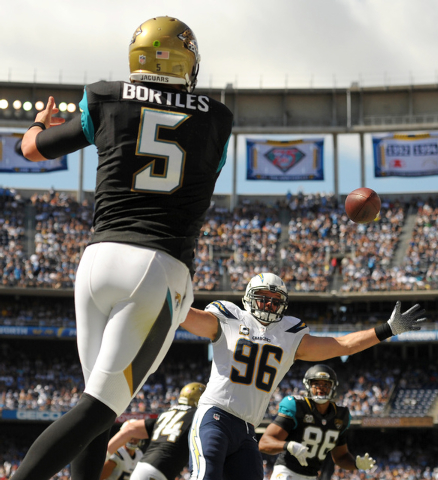 If not for promising rookie quarterback Blake Bortles, the Jacksonville Jaguars might seem to have no future. But there are unexpected results each week in the NFL, so no team is hopeless on any given Sunday.

The Jaguars are a joke, though, and Jimmy Vaccaro decided to make them a punch line in a proposition bet.

Will Jacksonville go 0-16? When Vaccaro posted the prop at the South Point sports book on Oct. 1, the Jaguars were 0-4 and the “Yes” side was offered at 25-1 odds.

“At the time, we thought the Jaguars were the worst team in the league, so we put it up,” he said.

“I can always say it’s a two-way prop,” Vaccaro said. “We have money on both sides.”

The Jaguars, 0-6 straight up and 1-5 against the spread, are 5½-point home underdogs to the Cleveland Browns in Week 7.

Jacksonville just missed denting the win column in Week 6. After coach Gus Bradley mismanaged his timeouts and the clock, the Jaguars sent out Josh Scobee for a 55-yard field-goal attempt with three seconds remaining. Scobee’s kick was blocked, and Tennessee escaped with a 16-14 victory.

The Titans visit Jacksonville on Dec. 18, a date that might represent the Jaguars’ best shot to win, if they don’t upset the Browns this weekend.

“I think the Jaguars are a ‘dog in every game,” Vaccaro said. “If the Titans fold up, you might see a pick-em there.”

Jacksonville figures to be a significant underdog in its other remaining home games against Miami, Dallas, the New York Giants and Houston. The Jaguars still must play Cincinnati, Indianapolis, Baltimore and Houston on the road, so they get two shots at the mediocre Texans.

In their season opener at Philadelphia, the Jaguars raced to a 17-0 halftime lead, an inspiring outburst long forgotten because they lost 34-17 to the Eagles.

Still, the odds are in Jacksonville’s favor to win at least one game. Last season, the Jaguars started 0-8 and finished 4-12, beating the Texans twice and the Browns and Titans once.

Double-digit favorites are 3-4 ATS, with New Orleans being the only team favored by double digits more than once.

The point spread has mattered in 12 games — games in which the favored team won but the underdog covered the spread — not including the Carolina-Cincinnati tie and two games that ended in pushes.

A SUPER ‘CAPPER — The SuperContest at the Westgate attracted a record 1,403 entries this year, and it’s no surprise that a few of those NFL handicappers are red hot. Still, Dustin Rampi, a 33-year-old real estate investor from Massillon, Ohio, is taking it to an extreme by posting a 26-4 ATS record to grab a two-game lead.

Rampi, who goes by the alias Alcatraz Holdings, was interviewed by Dave Tuley for a story on ESPN.com this week. Rampi paid the $1,500 to enter the SuperContest for the first time.

“That is incredible,” said Westgate book director Jay Kornegay, who called the 26-4 mark the hottest start he has seen in the contest’s history.