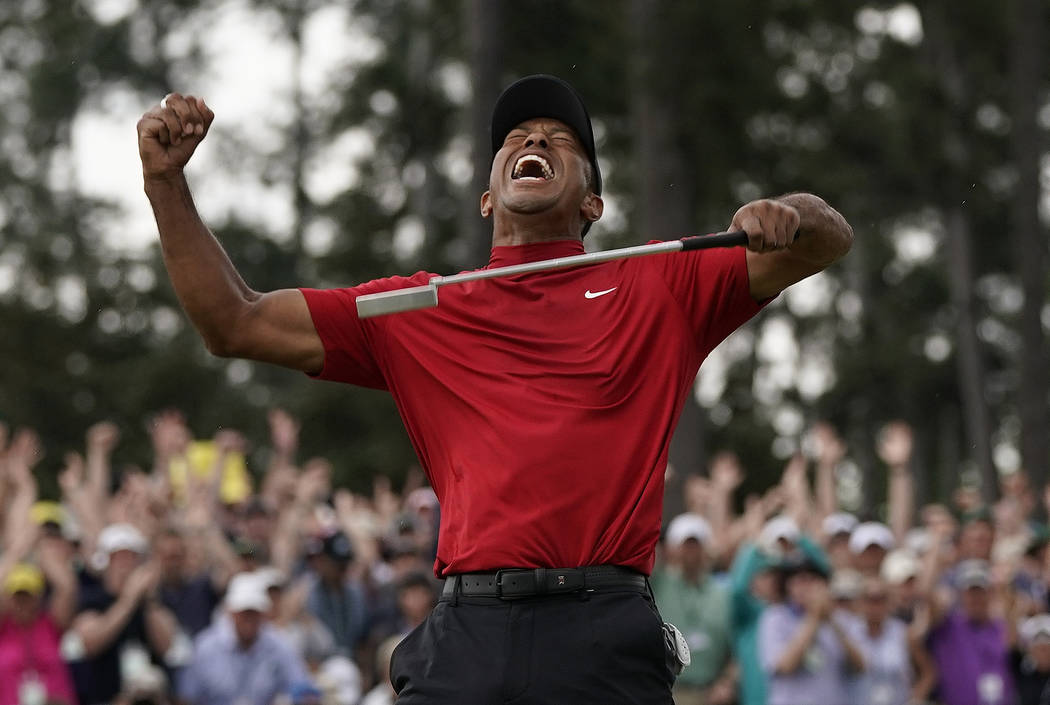 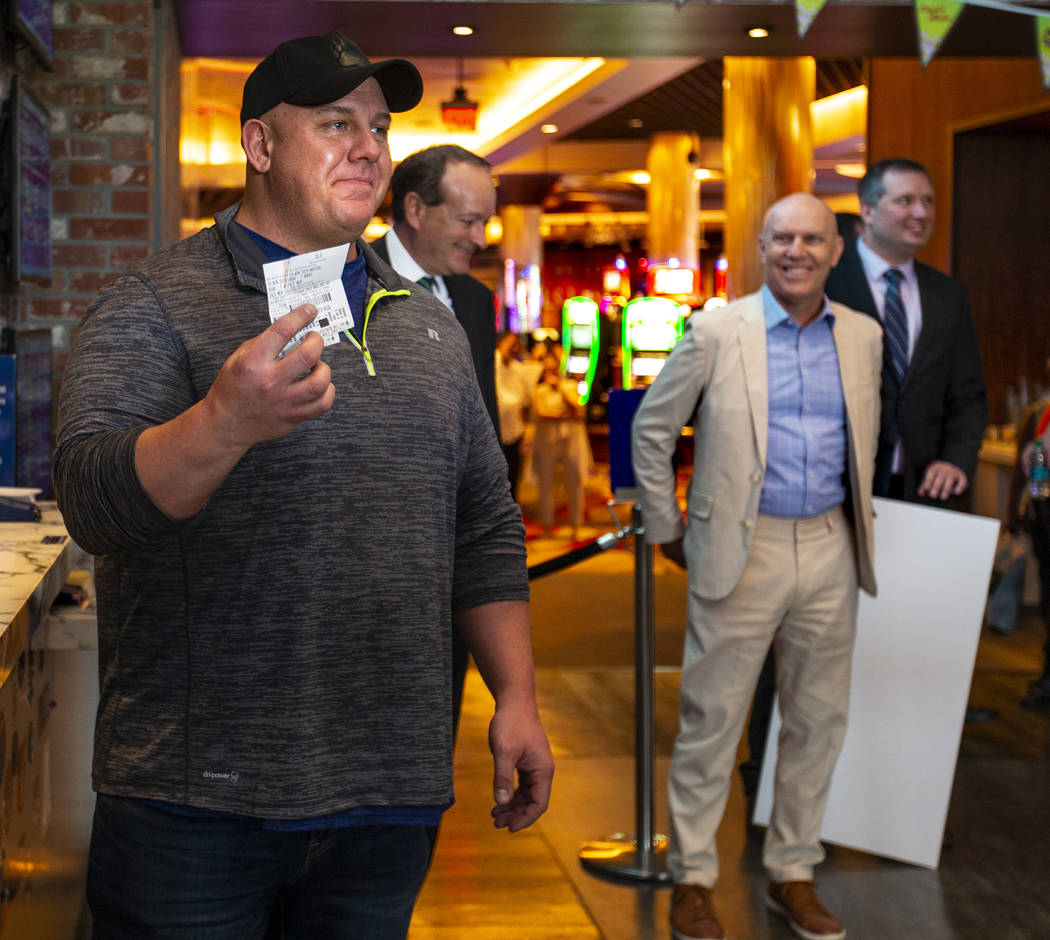 James Adducci of Wisconsin shows off his $1,190,000 winning payout tickets from the William Hill Sports Book at the SLS having bet $85,000 on Tiger Woods to win the Masters, Monday, April 15, 2019, in Las Vegas. (L.E. Baskow/Las Vegas Review-Journal) @Left_Eye_Images 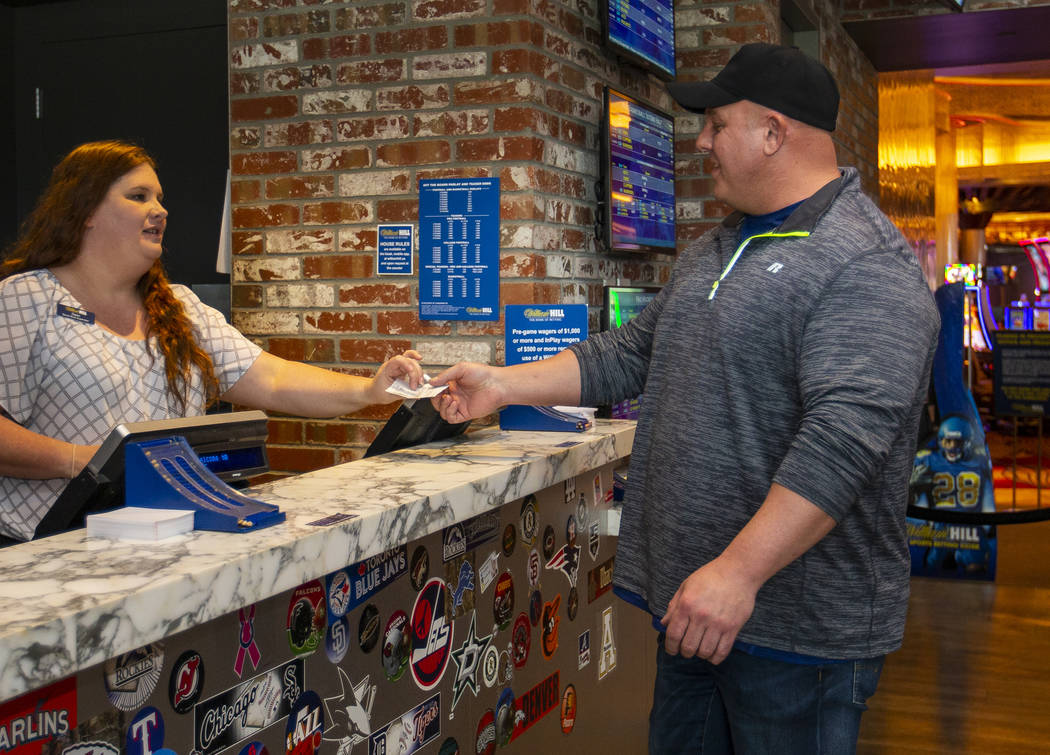 James Adducci of Wisconsin cashes in his $1,190,000 winning payout tickets from the William Hill Sports Book at the SLS having bet $85,000 on Tiger Woods to win the Masters, Monday, April 15, 2019, in Las Vegas. (L.E. Baskow/Las Vegas Review-Journal) @Left_Eye_Images 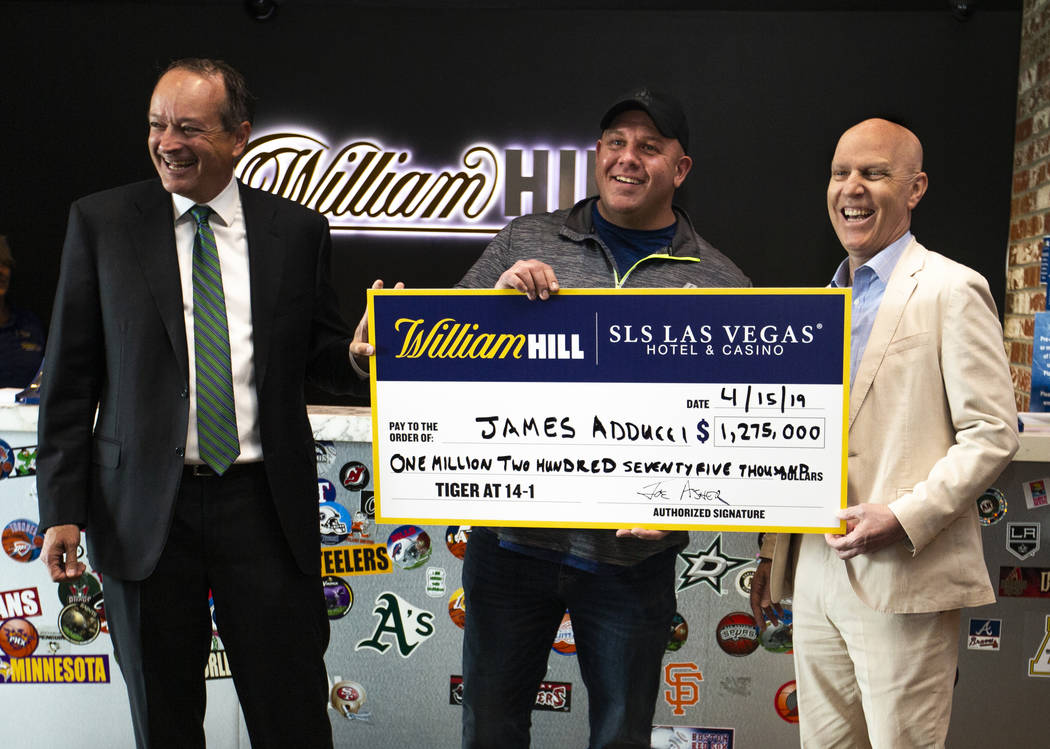 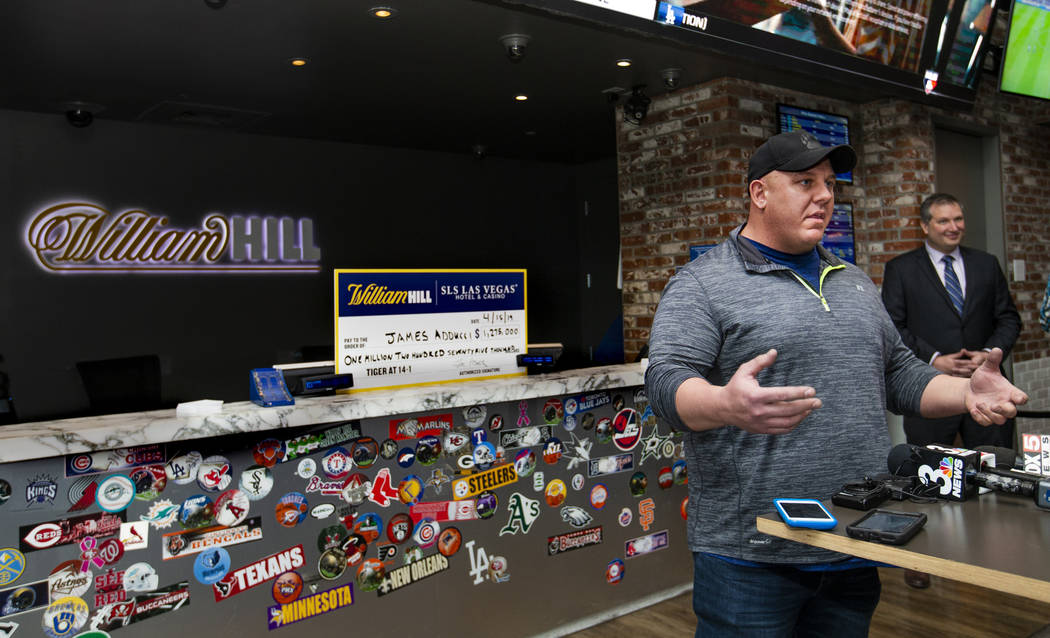 James Adducci of Wisconsin speaks about his $1,190,000 winning payout from the William Hill Sports Book at the SLS having wagered $85,000 on Tiger Woods to win the Masters, Monday, April 15, 2019, in Las Vegas. (L.E. Baskow/Las Vegas Review-Journal) @Left_Eye_Images 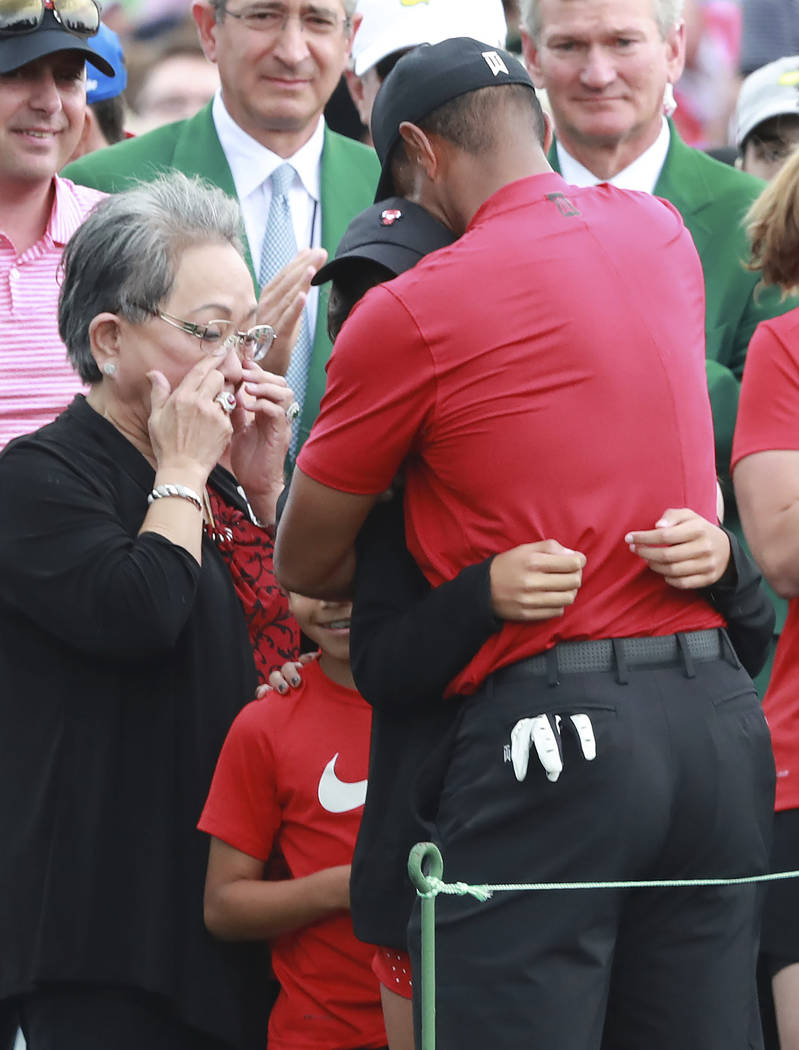 Tiger Woods' mother Kultida Woods wipes away tears as he hugs his daughter Sam and son Charlie behind the 18th green after winning the Masters at Augusta National Golf Club on Sunday, April 14, 2019, in Augusta. (Curtis Compton/Atlanta Journal-Constitution via AP) 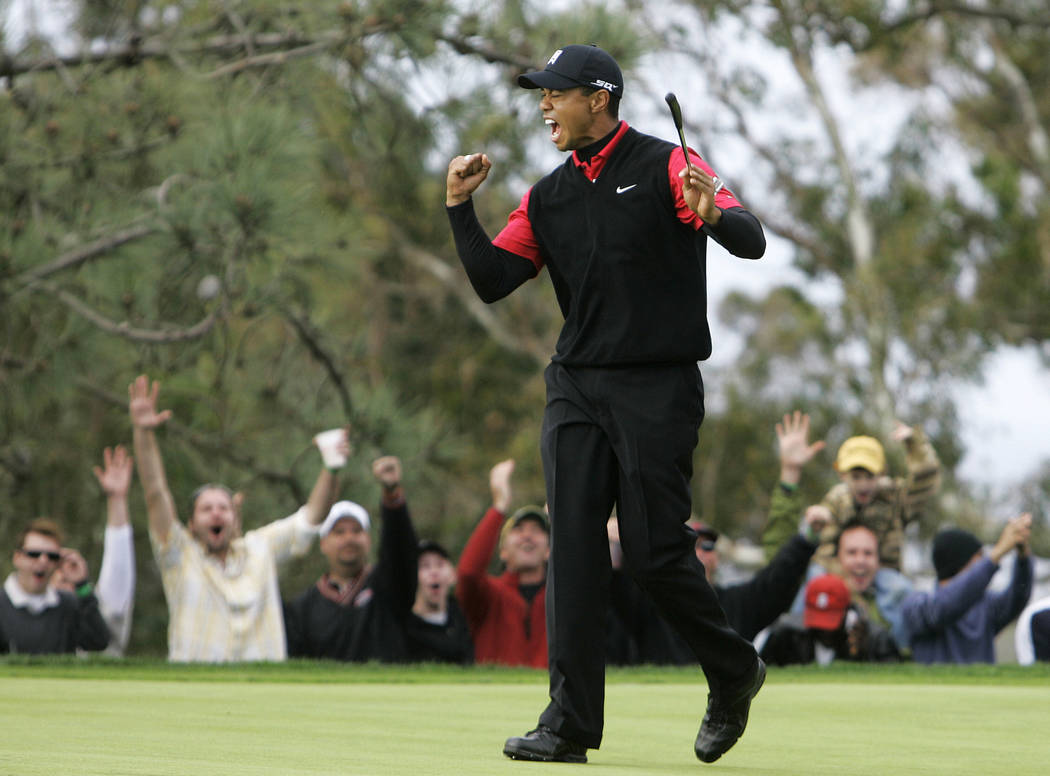 FILE - In this Jan. 27, 2008, file photo, Tiger Woods and the gallery celebrate his birdie on the 11th hole of the South Course at Torrey Pines during the final round of the Buick Invitational golf tournament in San Diego. He had surgery on his left knee two days after the Masters. Woods completes an amazing journey by winning the 2019 Masters, overcoming 11 years of personal foibles and professional pain that seemed likely to be his lasting legacy. (AP Photo/Chris Park, File) 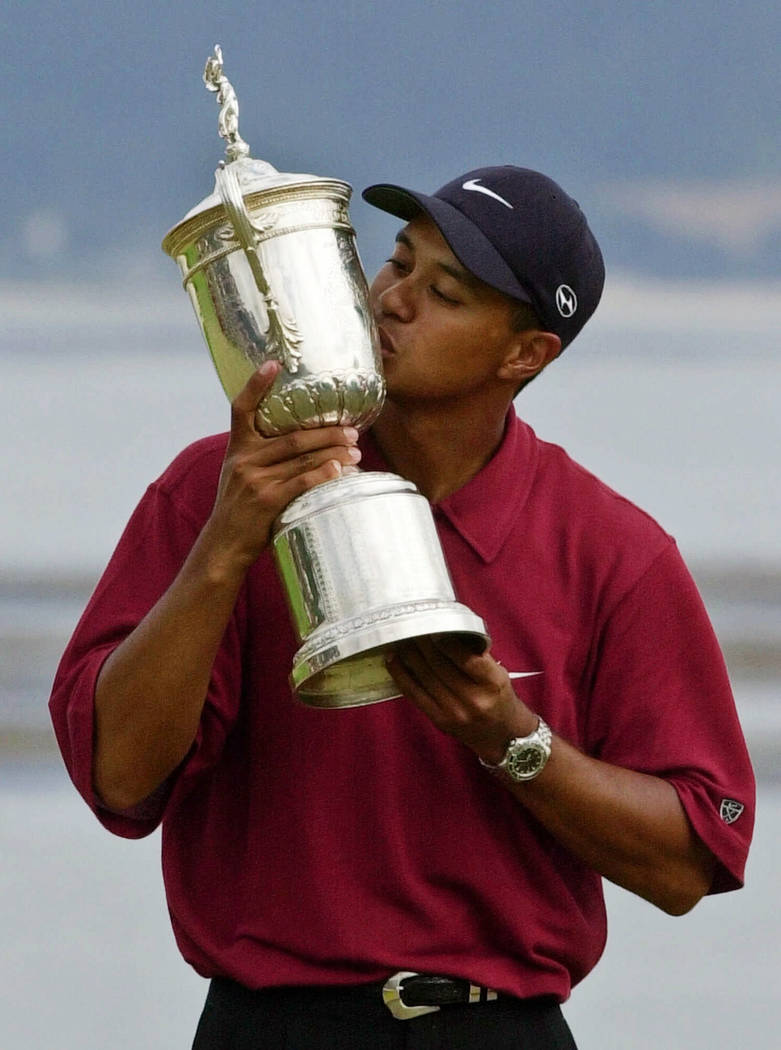 FILE - In this June 18, 2000, file photo, Tiger Woods kisses the winner's trophy after capturing the 100th U.S. Open Golf Championship at the Pebble Beach Golf Links in Pebble Beach, Calif. He won the U.S. Open by a record 15 strokes. Woods completes an amazing journey by winning the 2019 Masters, overcoming 11 years of personal foibles and professional pain that seemed likely to be his lasting legacy. (AP Photo/Elise Amendola, File) 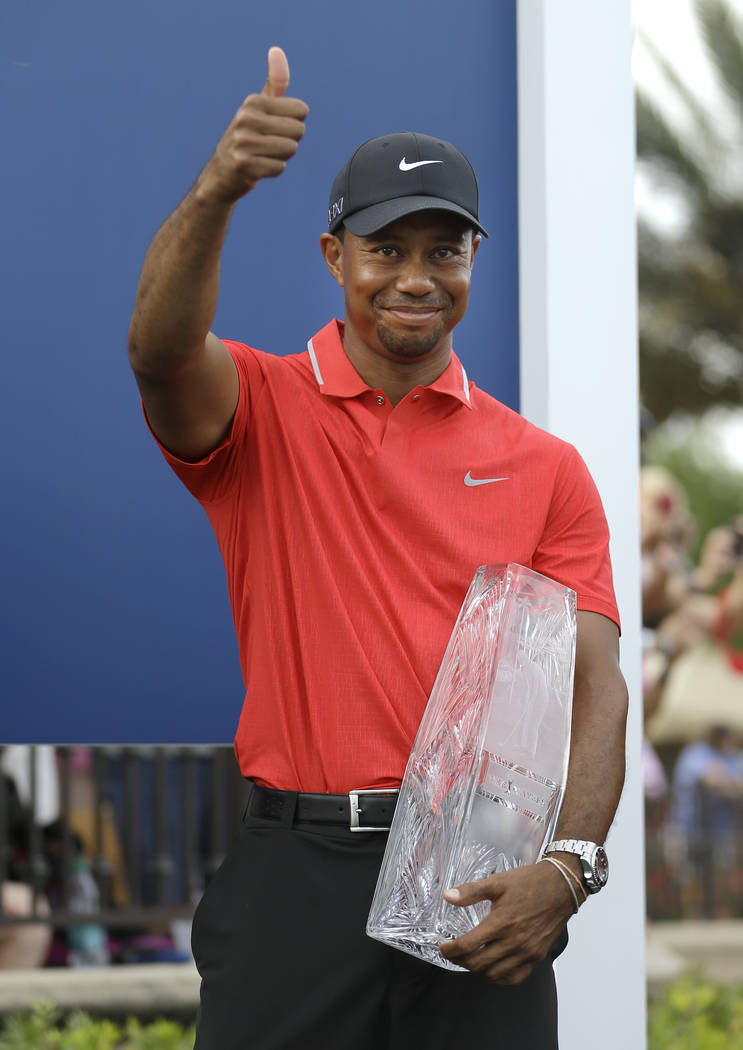 FILE - In this May 12, 2013, file photo, Tiger Woods gives a thumbs-up as he holds the trophy after winning The Players Championship golf tournament at TPC Sawgrass in Ponte Vedra Beach, Fla. Woods completes an amazing journey by winning the 2019 Masters, overcoming 11 years of personal foibles and professional pain that seemed likely to be his lasting legacy. (AP Photo/John Raoux, File) 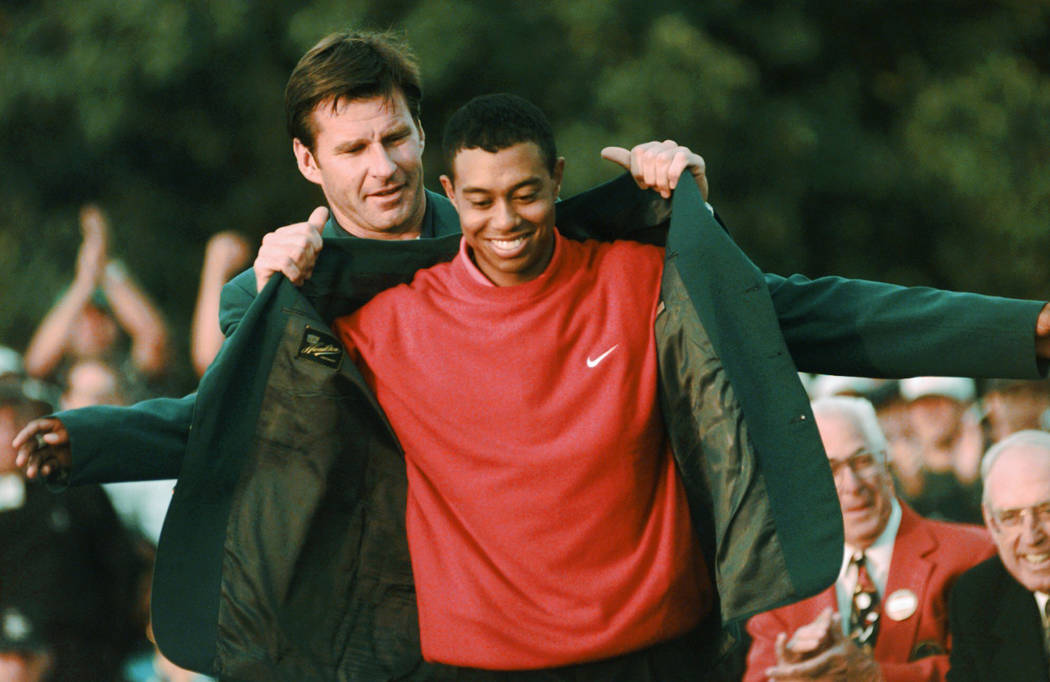 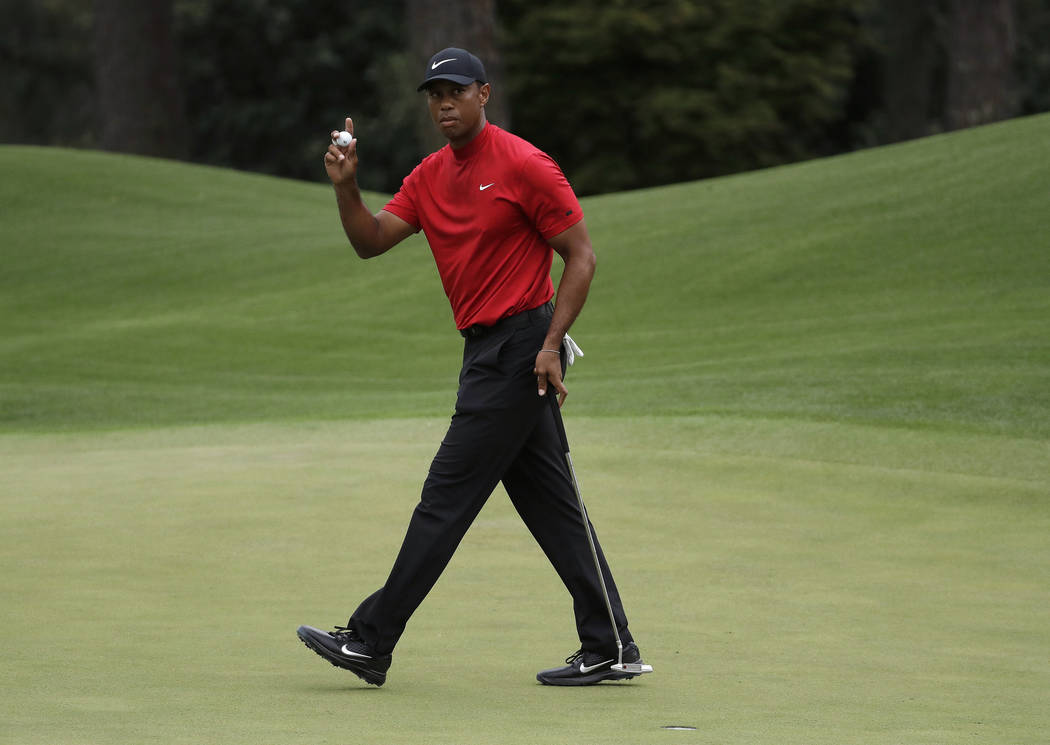 FILE - In this April 14, 2019, file photo, Tiger Woods waves on the eighth hole during the final round of the Masters golf tournament in Augusta, Ga.Harold Varner III worked up the courage to ask a favor of Tiger Woods for a close friend, Daniel Meggs, battling colon cancer. Woods made a videotape message for Meggs on the Wednesday of the Masters, offering encouragement to the former Wake Forest golfer to keep fighting and to never give up hope. (AP Photo/Chris Carlson, File)

Tiger Woods is back, and so is the bettor who won $1.19 million on the golfer to win the Masters.

James Adducci, the La Crosse, Wisconsin, man who cashed his $85,000 wager on Woods to win the year’s first major at 14-1 odds, returned to the William Hill sportsbook at SLS Las Vegas on Wednesday to make another major wager on the golfer.

“This has kind of been my thinking since last year, that he would win the Masters but that would be just the beginning to win the Grand Slam,” Adducci said. “I have the same sort of feeling as before.”

Adducci, 39, reiterated that the Masters bet was the first sports wager he had ever made and that this is the second.

“Absolutely it was my first bet ever in my life. I’d never even done fantasy leagues or brackets,” he said. “It was what I figured I could afford to lose and continue living the same life I’d been. I really thought it was a solid investment, though everyone said I was crazy.

“This is my second bet ever. I don’t plan on now getting into this.”

Woods needs to win the PGA Championship, U.S. Open and British Open to become the first golfer to capture the modern era Grand Slam. He has held all four majors simultaneously — a feat capped by the 2001 Masters and dubbed the “Tiger Slam” — but not in the same calendar year.

The 15-time major champion is the 7-1 favorite at William Hill to win the PGA Championship, scheduled for May 16 to 19 at Bethpage Black in New York. Brooks Koepka is the 10-1 second choice, and Dustin Johnson and Rory McIlroy are at 11-1.

“Gonna make the PGA more interesting than usual, that’s for sure,” William Hill sportsbook director Nick Bogdanovich said. “And if he happens to get the next leg in, the summer will be very exciting, to say the least.”

Adducci essentially said he expects the universe to will Woods to the Grand Slam.

“When billions of people around the world want something, that energy, I think, creates the fact,” he said. “There’s power in that. The people behind him.”

Adducci flew to Las Vegas on Tuesday and flew back to Wisconsin on Wednesday after placing the bet. The union construction worker said his life hasn’t changed much since winning $1.19 million in April.

“I did some home improvement — got some new garage doors — but I have the same clothes, same car and same house,” he said. “For me, it’s just a game. It feels good to breathe and not be buried financially.

“I wear Walmart shirts and go for deals on everything I get. I’m cheap. But this is a once or twice in a lifetime opportunity. I’ve never gone against the odds if I didn’t believe I had the ability to win. I wouldn’t have bet the Masters or this.”