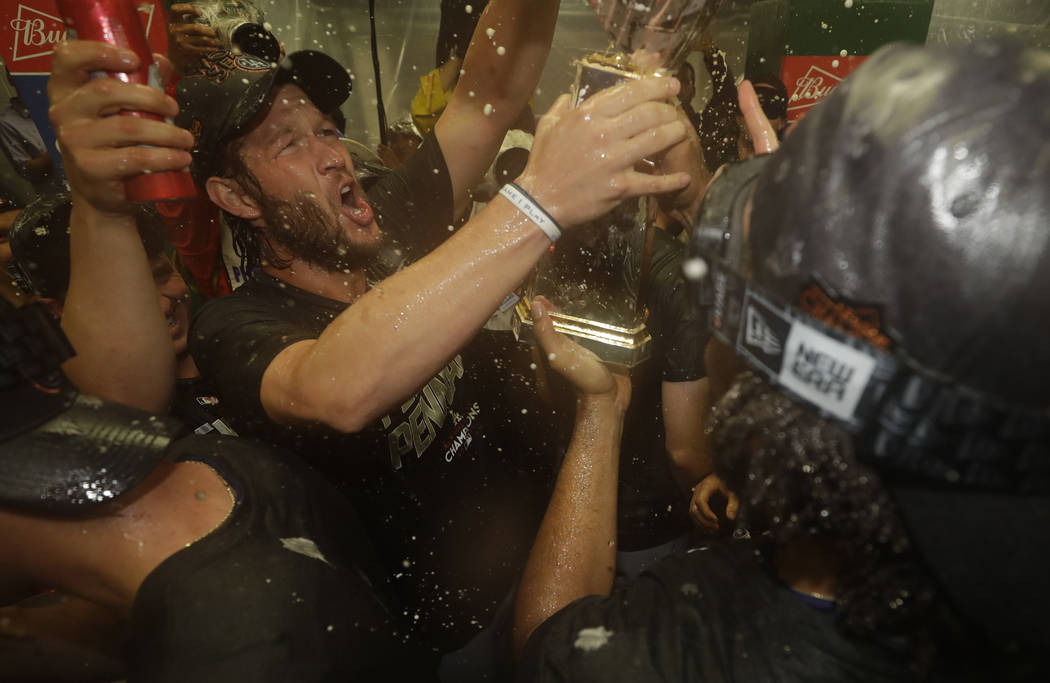 Los Angeles Dodgers' Clayton Kershaw, left, and his teammates celebrate after Game 5 of baseball's National League Championship Series against the Chicago Cubs, Thursday, Oct. 19, 2017, in Chicago. The Dodgers won 11-1 to win the series and advance to the World Series. (AP Photo/Matt Slocum)

The Los Angeles Dodgers opened as a minus-140 favorite over the Houston Astros in the World Series, which opens Tuesday at Dodger Stadium.

Los Angeles was quickly moved to a minus-160 favorite at the Westgate sports book on Sunday afternoon to win its first World Series title since 1988.

“The perception is the Dodgers are a lot better than the Astros,” Westgate sports book director Jay Kornegay said. “But once you start digging into the stats and looking at these two teams, they’re very comparable.

“A lot of people think the Dodgers can walk through this but I think it’s going to closer than they think.”

The early action at Station Casinos was heavily in favor of Los Angeles to win the Fall Classic.

“It’s been pretty one-sided,” Sunset Station sports book director Chuck Esposito said. “The first several wagers we accepted were all on the Dodgers. The Dodgers are the much more public team.”

The Astros, plus-140 underdogs to the Dodgers, beat the New York Yankees on Saturday night in Game 7 of the American League Championship Series to advance to only their second World Series in franchise history.

Houston was swept by the Chicago White Sox in 2005 in its only other World Series appearance.

Dodgers ace Clayton Kershaw is a minus-180 favorite over Astros starter Dallas Keuchel (plus-165) in Game 1 and the total is 7 (Under, minus-130).

Los Angeles led the majors with 104 wins and Houston had 101. This is the first World Series matchup of 100-win teams since 1970, when the 108-win Baltimore Orioles beat the 102-win Cincinnati Reds in five games.