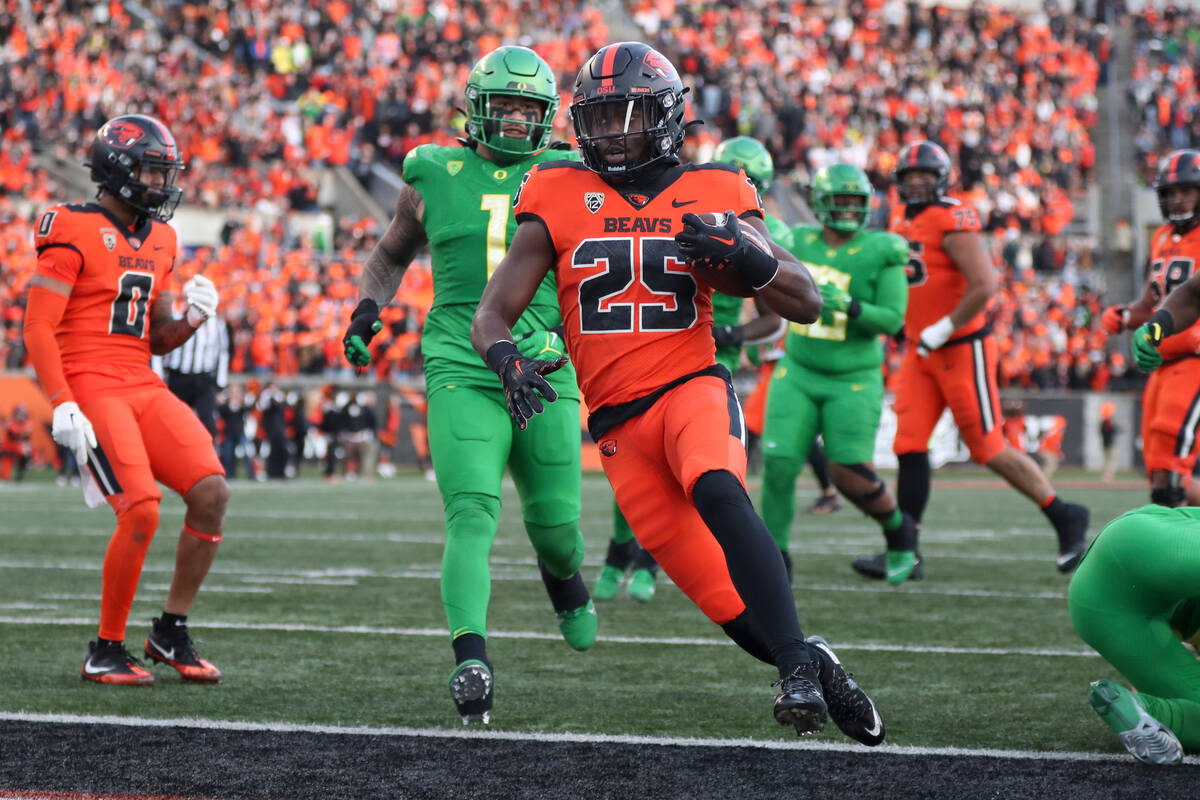 Oregon State running back Isaiah Newell (25) scores a touchdown against Oregon during the second half of an NCAA college football game on Saturday, Nov 26, 2022, in Corvallis, Ore. (AP Photo/Amanda Loman)

One of the biggest line moves in college football Saturday came in the Oregon-Oregon State game.

The line jumped the fence at South Point and other sportsbooks after opening the day with Oregon a 2½- to 3-point favorite. By the time kickoff rolled around, the host Beavers were 1-point favorites at most books and got up to 1½-point chalk at South Point.

The bettors turned out to be correct.

Thanks to a memorable fourth-quarter comeback and the Ducks’ generosity, Oregon State snagged a 38-34 victory and the cover.

“The Oregon game was bad for us,” South Point sportsbook director Chris Andrews said via text message. “We started the day at Oregon -3 and closed Oregon St. -1½. Oregon collapsing hurt us.”

Oregon State trailed 31-10 in the third quarter and reached as high as +2500 on the money line during in-game wagering at Caesars Sportsbook.

But the Ducks fell apart in the fourth quarter as Oregon State scored the final 21 points after trailing 34-17.

First, the Beavers took advantage of a short field to close within 34-24 before Oregon punter Alex Bales dropped the snap and had to fall on the ball at his own 2-yard line. That led to a Ben Gulbranson 1-yard touchdown run for Oregon State that brought the Beavers to within 34-31 early in the fourth.

On the next possession, the Ducks gambled on fourth-and-1 from their own 29-yard line. Quarterback Bo Nix was stopped short with 9:39 to play, handing the ball to Oregon State on a short field.

Oregon State ran the ball 19 straight times to close out the game and won despite completing only six passes for 60 yards.

Oregon had a chance to retake the lead after putting together a long drive, and had first-and-goal at the 5. But the Beavers held Oregon out of the end zone on three straight running plays before Nix threw incomplete on fourth down.

Upset in The Game

Michigan had not won at Ohio State since 2000 before rolling the Buckeyes 45-23 to earn a spot in the Big Ten championship game.

The Wolverines closed as 9-point underdogs at most sportsbooks and were +9½ at South Point after sitting at +7½ most of the week. The last time Michigan defeated its rival when catching 7 points or more was 1996 when the Wolverines snagged a 13-9 victory as 17-point underdogs.

At Caesars Sportsbook, the spread betting was almost even, with Ohio State seeing 51 percent of the tickets written and handle.

The game also soared over the total of 56, the ninth straight time in the rivalry that the over has cashed. Bettors pushed the number down after it started at 57½, and Caesars Sportsbook reported 51 percent of the tickets and 72 percent of the dollars wagered were on the under.

Depending on what number they had, Auburn bettors endured a brutal end to the Iron Bowl against rival Alabama.

The Tigers, who closed as consensus 22-point underdogs, trailed 42-14 after the first drive of the third quarter before they closed the gap to 42-27 on a 39-yard field goal with 2:08 remaining.

However, the Crimson Tide returned the onside kick for 24 yards to the Auburn 27. Two plays later, running back Jahmyr Gibbs scored on a 23-yard run, and the extra point put Alabama on top 49-27 for the push.

It was a similar story for Michigan State, which closed as a 19-point underdog against Penn State.

But Michigan State quarterback Payton Thorne was intercepted on the next drive, and Sean Clifford hit KeAndre Lambert-Smith for a 35-yard touchdown to put the Nittany Lions up 35-16 after the extra point.