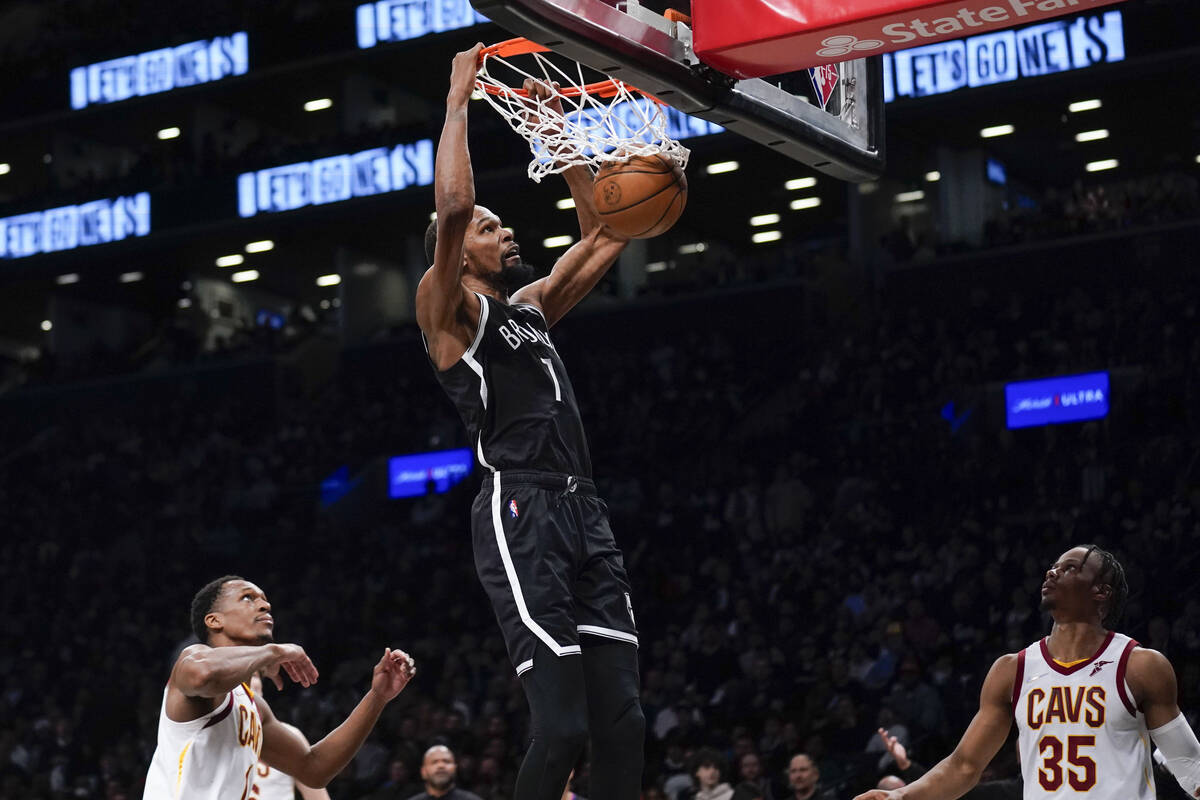 FILE -B rooklyn Nets' Kevin Durant dunks the ball during the second half of the opening basketball game of the NBA play-in tournament against the Cleveland Cavaliers, Tuesday, April 12, 2022, in New York. Kevin Durant has requested a trade from the Brooklyn Nets, according to a person with direct knowledge of the seismic decision that undoubtedly will have teams scrambling to put together enormous offers for the perennial All-Star. (AP Photo/Seth Wenig, File) 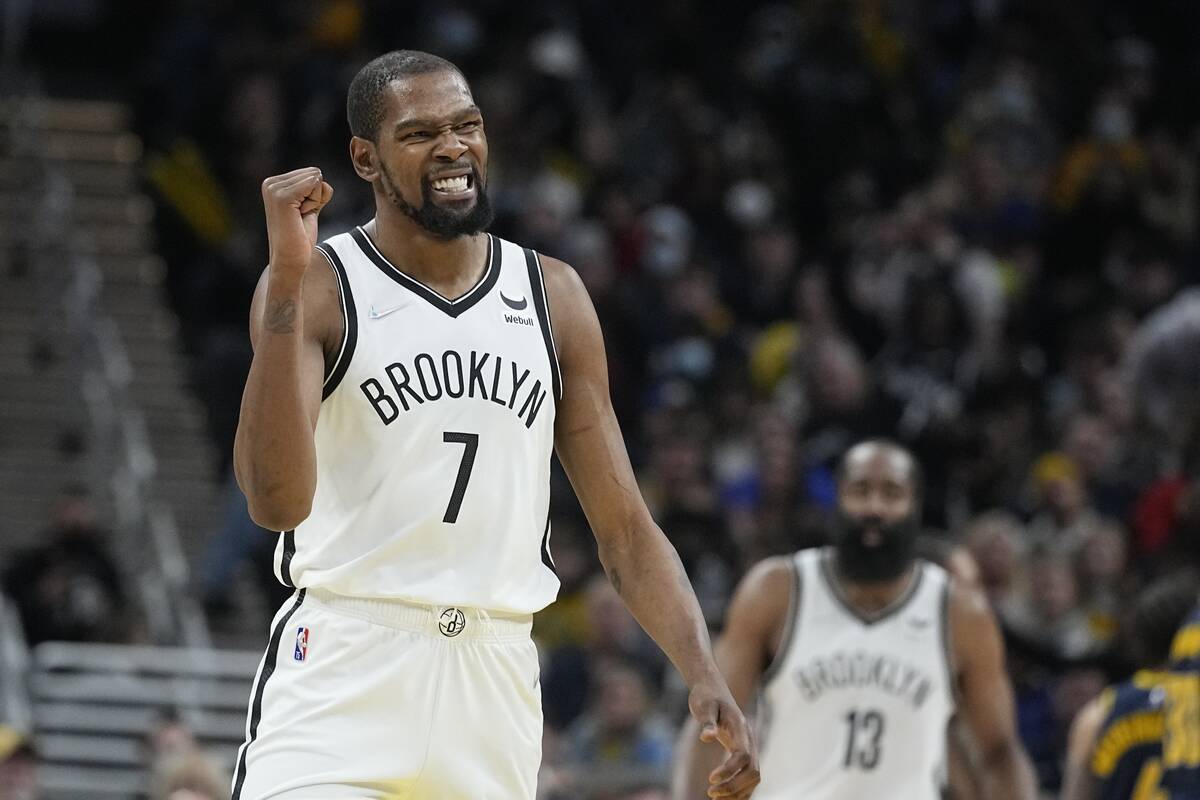 FILE - Brooklyn Nets' Kevin Durant reacts during the second half of an NBA basketball game against the Indiana Pacers, Wednesday, Jan. 5, 2022, in Indianapolis. Kevin Durant has requested a trade from the Brooklyn Nets, according to a person with direct knowledge of the seismic decision that undoubtedly will have teams scrambling to put together enormous offers for the perennial All-Star. (AP Photo/Darron Cummings, File) 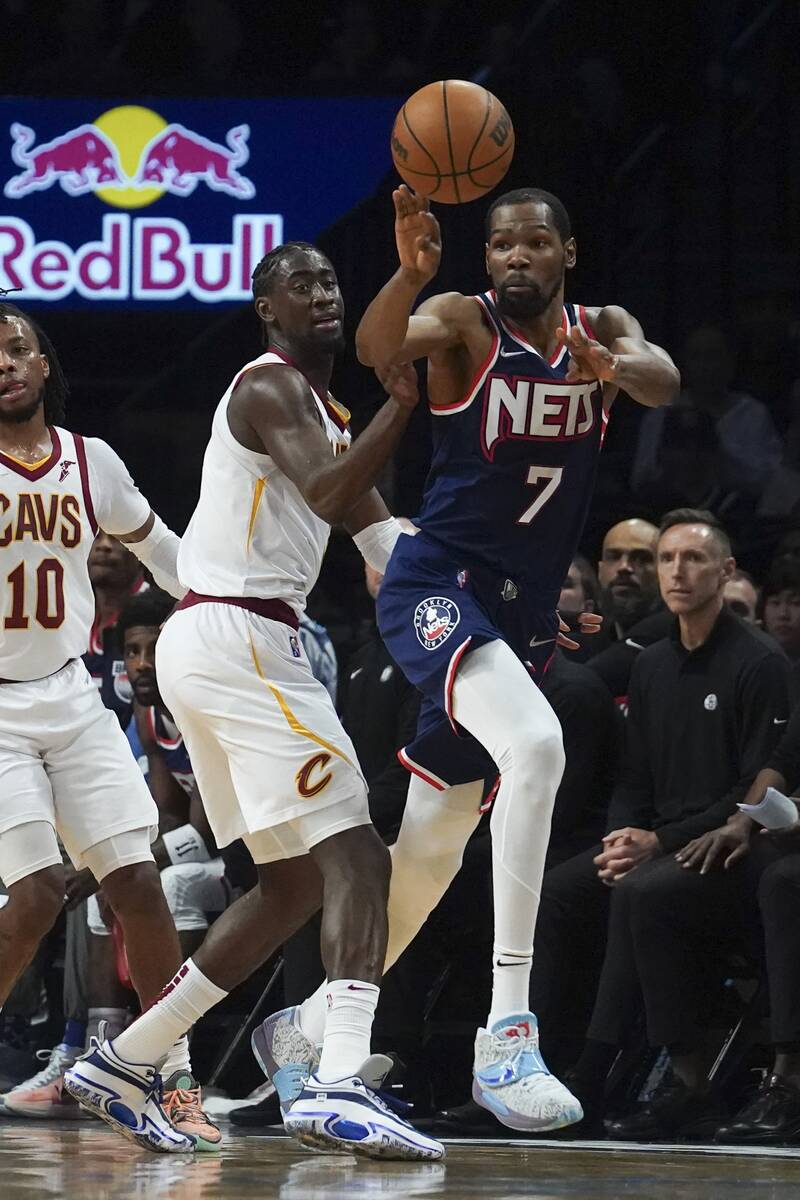 The Boston Celtics already were the 6-1 favorites at the Westgate SuperBook to win the NBA title when it was reported Monday by ESPN that they had been in talks with the Brooklyn Nets about a possible trade for Kevin Durant.

Westgate NBA oddsmaker Jeff Sherman didn’t move Boston’s odds based on the report, but said the Celtics would likely drop to 3-1 or 7-2 favorites if they acquired the former league MVP.

“One thing that has to be considered if Durant went there is the Celtics would have to start with Jaylen Brown and picks and I’m sure other players, too. It would be a large haul,” Sherman said. “There’s a lot of posturing right now. It’s like the draft. There’s a lot of misleading information and smoke screens.”

When Durant requested a trade from Brooklyn on June 30, Phoenix and Miami were reportedly his preferred destinations. But the Suns have been “all but eliminated” from the Durant sweepstakes by Boston’s offer, according to The Athletic.

The website reported that the Celtics’ proposal of Brown, Derrick White and a draft pick was rejected by the Nets, which reportedly has asked Boston to include Brown, Marcus Smart, draft picks and potentially another rotation player.

Phoenix can’t trade center Deandre Ayton until Jan. 15 after it matched a four-year, $133 million offer sheet he signed with the Indiana Pacers.

The Suns and Milwaukee Bucks are each 8-1 to win it all next season, behind the Golden State Warriors and Los Angeles Clippers at +650 apiece.

If Phoenix acquires Durant, Sherman said he would probably make the Suns a 3-1 favorite.

“As long as the main pieces are kept,” he said. “I don’t think the Suns are trading (Devin) Booker at all. So if they have Booker, Chris Paul and Durant. …

“The Suns have a lot of assets. From the Nets’ perspective, if they can get a good deal, I think they would probably rather have him go to the Western Conference than the East.”

The Heat, 10-1 to win it all, are still in the running for Durant. But they’re hamstrung by the fact that they can’t trade Bam Adebayo to the Nets if Ben Simmons is on Brooklyn because of a rule preventing teams from having two players acquired via trade that were signed to the same type of rookie extension.

In a potential WNBA Finals preview, the Aces are 2-point road underdogs to the Chicago Sky at Station Casinos on Tuesday in the Commissioner’s Cup championship game that will air on Amazon Prime. The total is 169½.

Players will have an additional financial stake in the matchup as members of the winning team will earn $30,000 each, with an extra $5,000 going to the game’s MVP. Players on the losing team will take home $10,000 each.

Chase for the championship

The Westgate, Circa Sports, Station Casinos and Caesars Sportsbook each paid out Elliott as the winner, per the house rule that official NASCAR results are determined following post-race inspections.