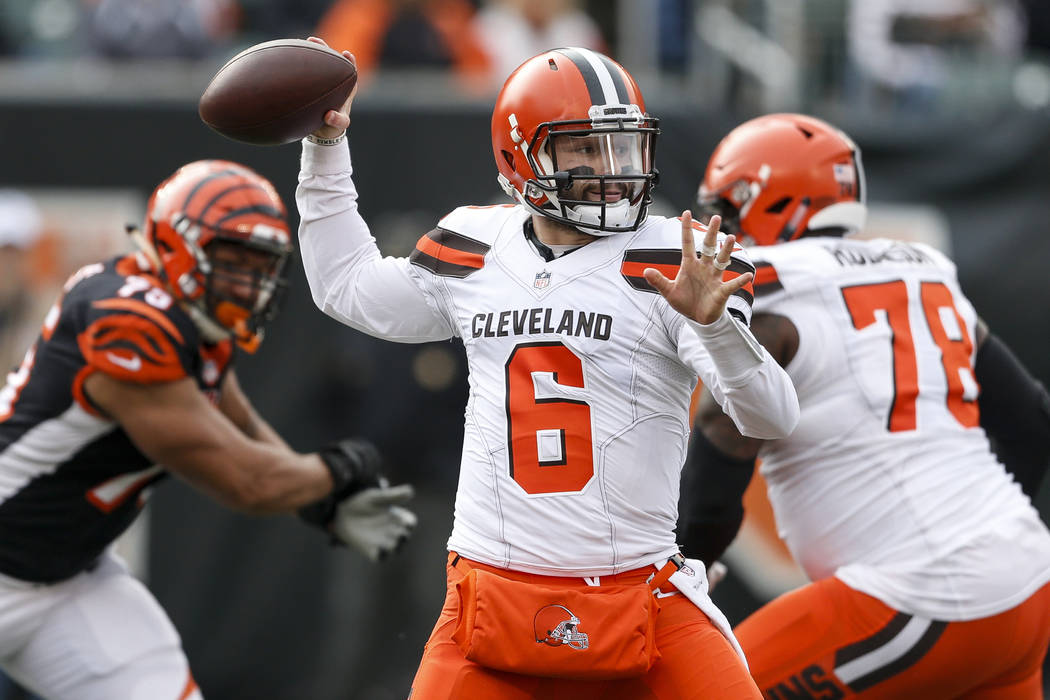 In this Nov. 25, 2018, file photo, Cleveland Browns quarterback Baker Mayfield passes in the first half of an NFL game against the Cincinnati Bengals, in Cincinnati. (AP Photo/Frank Victores, File) 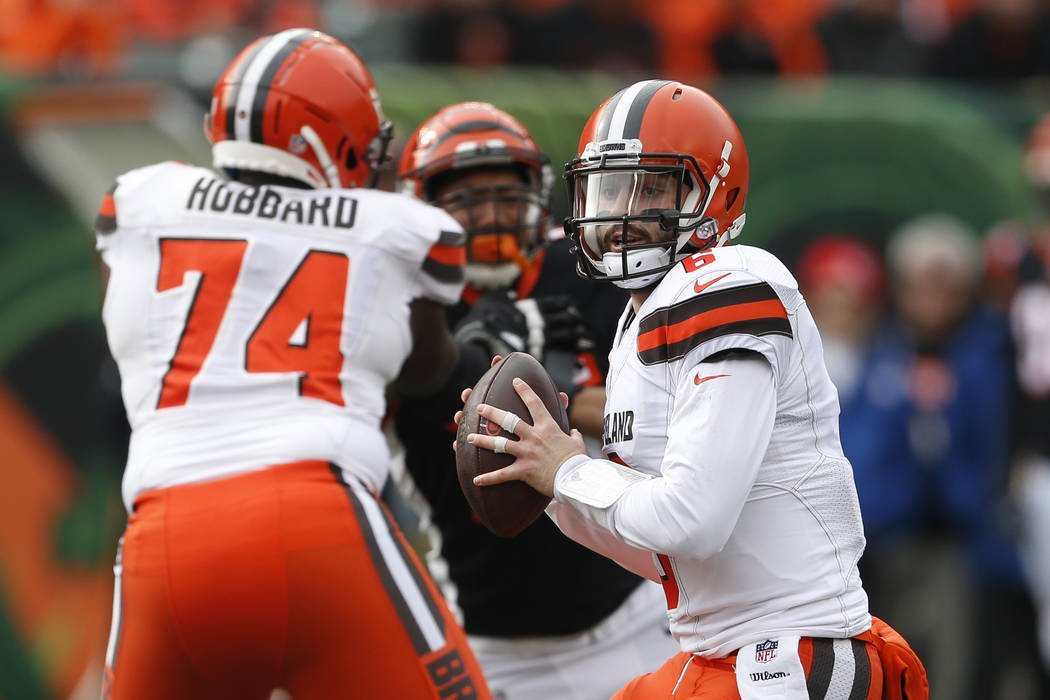 Cleveland Browns quarterback Baker Mayfield looks to pass in the first half of an NFL football game against the Cincinnati Bengals, Sunday, Nov. 25, 2018, in Cincinnati. (AP Photo/Gary Landers) 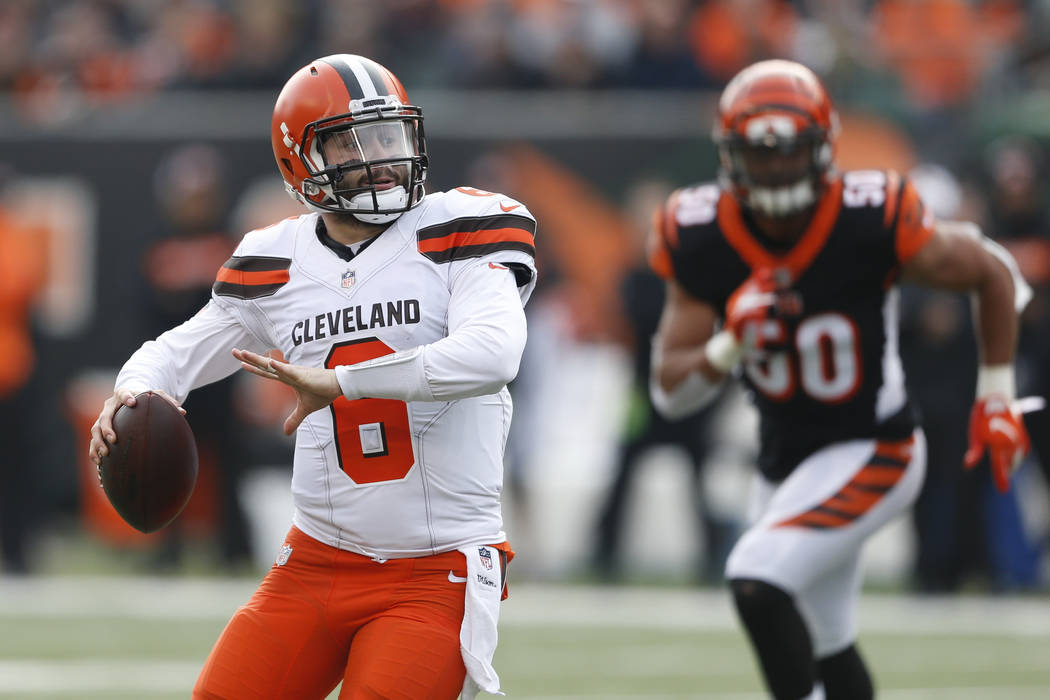 Cleveland Browns quarterback Baker Mayfield runs the ball in the first half of an NFL football game against the Cincinnati Bengals, Sunday, Nov. 25, 2018, in Cincinnati. (AP Photo/Gary Landers) 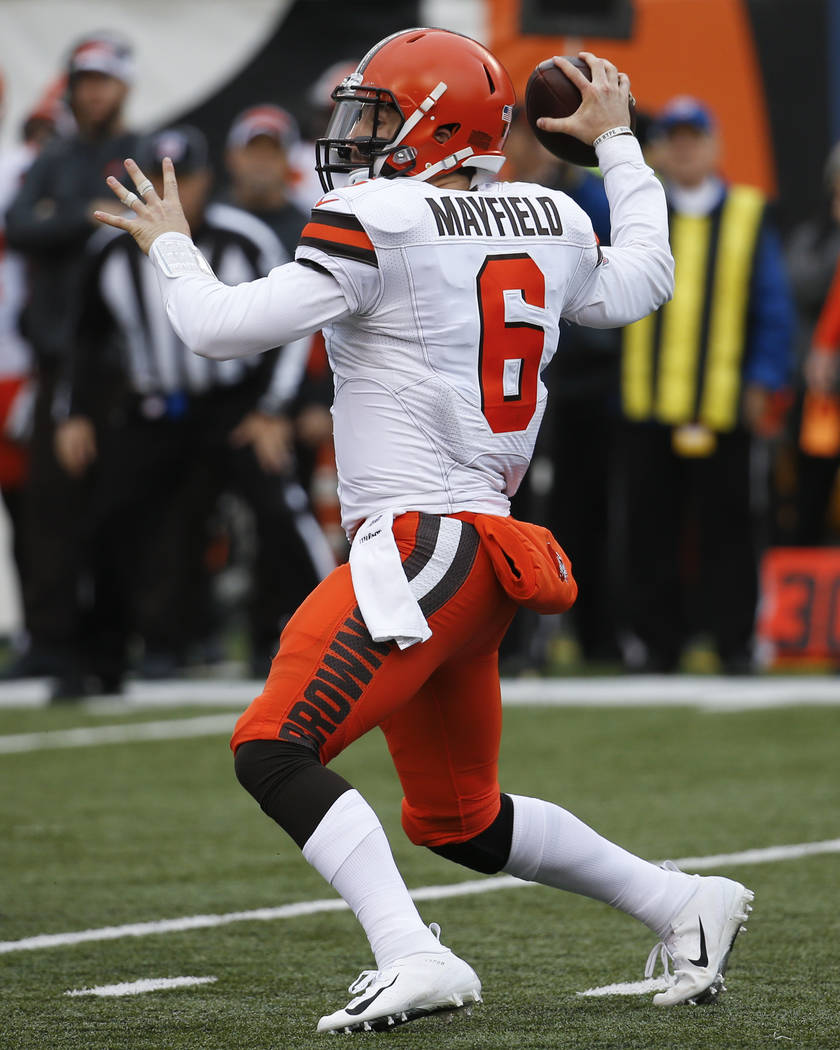 Cleveland Browns quarterback Baker Mayfield passes in the second half of an NFL football game against the Cincinnati Bengals, Sunday, Nov. 25, 2018, in Cincinnati. (AP Photo/Frank Victores) 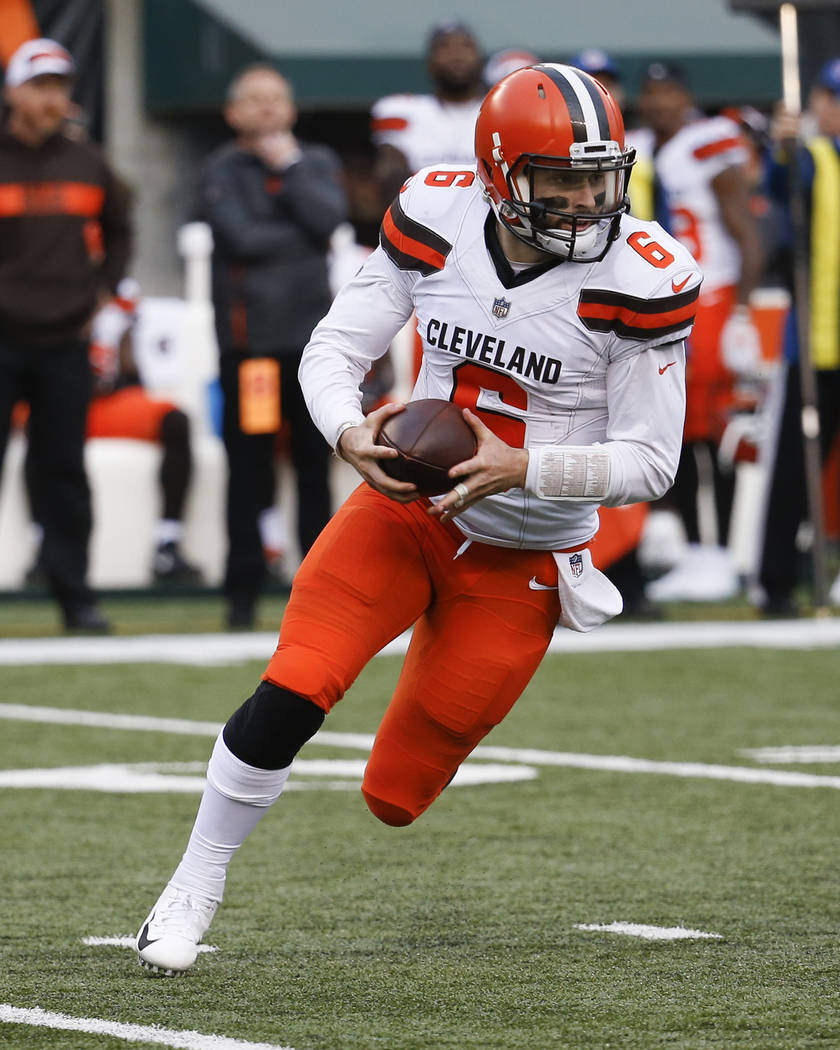 Cleveland Browns quarterback Baker Mayfield runs the ball in the second half of an NFL football game against the Cincinnati Bengals, Sunday, Nov. 25, 2018, in Cincinnati. (AP Photo/Frank Victores)

Betting on the Browns the past two years has been the equivalent of setting your money on fire.

In Hue Jackson’s first two seasons as Cleveland’s coach, the Browns went 1-31 while going 8-24 against the spread.

Despite the dismal results, sharp bettors have been bullish on Cleveland since last year. Their faith has been rewarded this season, as the Browns have covered seven of 11 games.

Cleveland carried a 25-game road losing streak into Sunday’s game at Cincinnati, but that didn’t stop the sharps from jumping all over the Browns. With the consensus line closing at pick, Cleveland whipped the Bengals 35-20 in what Westgate sports book manager Ed Salmons dubbed beforehand the “Hue Jackson Bowl.”

Jackson joined Cincinnati as an assistant coach two weeks after he was fired by the Browns and gave Cleveland ample added motivation to end their road skid.

The Browns lost to the Chiefs in their first game without Jackson before cruising to double-digit wins over the Falcons (28-16) and Bengals behind rookie quarterback Baker Mayfield.

Cleveland (4-6-1) is a 6-point underdog at streaking Houston (8-3) on Sunday, and Salmons recommends taking the points.

“Bet the Browns every week. Keep riding the Browns,” he said. “It’s amazing, the difference in this team, ever since this clown left. If he wasn’t around, they could be 7-3-1.

“He’s gone now, and the ball gets out in two seconds and Mayfield never gets sacked. And the team plays with a swagger now. You can just see it.”

Mayfield completed 36 of 46 passes for 474 yards, seven touchdowns and no interceptions in leading Cleveland to back-to-back wins for the first time since 2014.

Myles Garrett has 10 sacks, and the Browns lead the NFL in turnover differential.

The Texans’ stock never has been higher this season. The line on this game was 4 before Houston beat the Titans 34-17 on Monday night for its eighth straight win. We’ll sell high on the Texans and bank on the reborn Browns to keep it close.

Colts (-4) over JAGUARS: Andrew Luck has thrown for at least three TDs in his last eight games, and Indianapolis has won five straight while going 3-1-1 ATS. The Colts led the Jaguars 29-16 at halftime before settling for a 29-26 win and push on Nov. 11. Jacksonville is on a seven-game losing streak and an 0-5-2 spread slide and will be without suspended running back Leonard Fournette. Cody Kessler will make his first start at quarterback since 2016, when he went 0-8 as a starter for Cleveland.

Panthers (-3½) over BUCCANEERS: Carolina has lost three consecutive games since its 42-28 win over Tampa Bay on Nov. 4. The Panthers produced 476 yards of offense in last week’s 30-27 loss to Seattle and have dominated the series with the Buccaneers, going 5-0 ATS in their last five games in Tampa.

PATRIOTS (-5) over Vikings: After a 1-2 start, New England has won seven of its last eight games while going 6-2 ATS. The Patriots have covered four of their five home games this season and 10 of their past 12. New England is seventh in the league in scoring (27.9 ppg) and 13th in scoring defense (22.6 ppg), three spots behind the Vikings (22.4 ppg). Sony Michel rushed for 133 yards against the Jets, and Rob Gronkowski had a TD catch in his return to action.

FALCONS (-1½) over Ravens: Atlanta is 11th in the NFL in scoring (25.5 ppg), and its porous defense will get a boost with the return of linebacker Deion Jones. Baltimore rookie quarterback Lamar Jackson rushed for 190 yards in leading the Ravens to wins in his first two starts. But his passing ability is suspect, as he threw for one TD and three interceptions. We’ll fade the rookie in his first start on the road.

Last week: 3-2 against the spread.