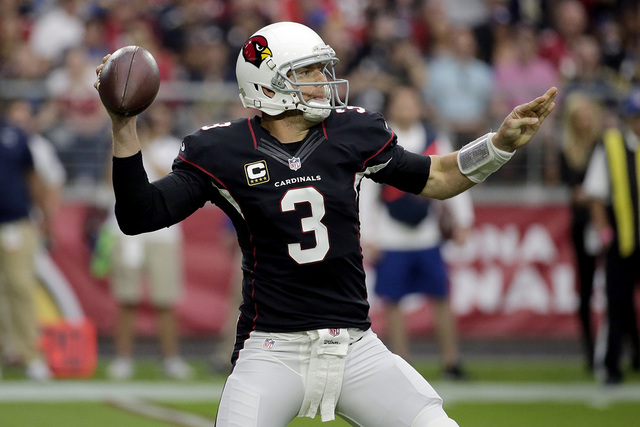 A pair of slumping quarterbacks are about to clash. Carson Palmer, coming off a one-week concussion hiatus, could use his declining health as some sort of an excuse for his weak start to the season.

Ryan Fitzpatrick is just a sorry excuse for a $12 million quarterback. He has rewarded the New York Jets for their big gamble by throwing an NFL-high 10 interceptions.

Palmer and the Arizona Cardinals are 7½-point home favorites over the Jets on Monday night. The total is 46½. The Jets (1-4) will see their playoff hopes declared totaled with another loss.

“I would look for the Cardinals to start playing well,” Wynn Las Vegas sports book director John Avello said. “The Jets have not played well at all.”

A win could be a slump buster for the Cardinals (2-3). Palmer has only six touchdown passes after throwing for 35 last year. Arizona is 4-8 against the spread in its past 12 home games.

Fitzpatrick and coach Todd Bowles are under fire in New York after the Jets dropped their past three games by 18, 10 and 21 points.

“I don’t believe this spread is showing enough of a decline for Arizona’s rating, and the Jets have been downgraded too much after losing three straight,” said VegasInsider.com handicapper Micah Roberts, who’s taking the points with the Jets.

“These are not the same Cardinals from the first 15 games last season. Arizona has covered only twice — against weaklings San Francisco and Tampa Bay — in its past eight games. The Jets should not be getting 7½ here, and they might even win the game.”

Underdogs are 8-4-2 ATS in Week 6 — with six outright wins from Dallas, Jacksonville, Miami, New Orleans, San Diego and Washington — to help make winners of the bookmakers.

“It was the best Sunday of the month,” Westgate sports book director Jay Kornegay said.

Maybe the underdog trend will stay strong on Monday.