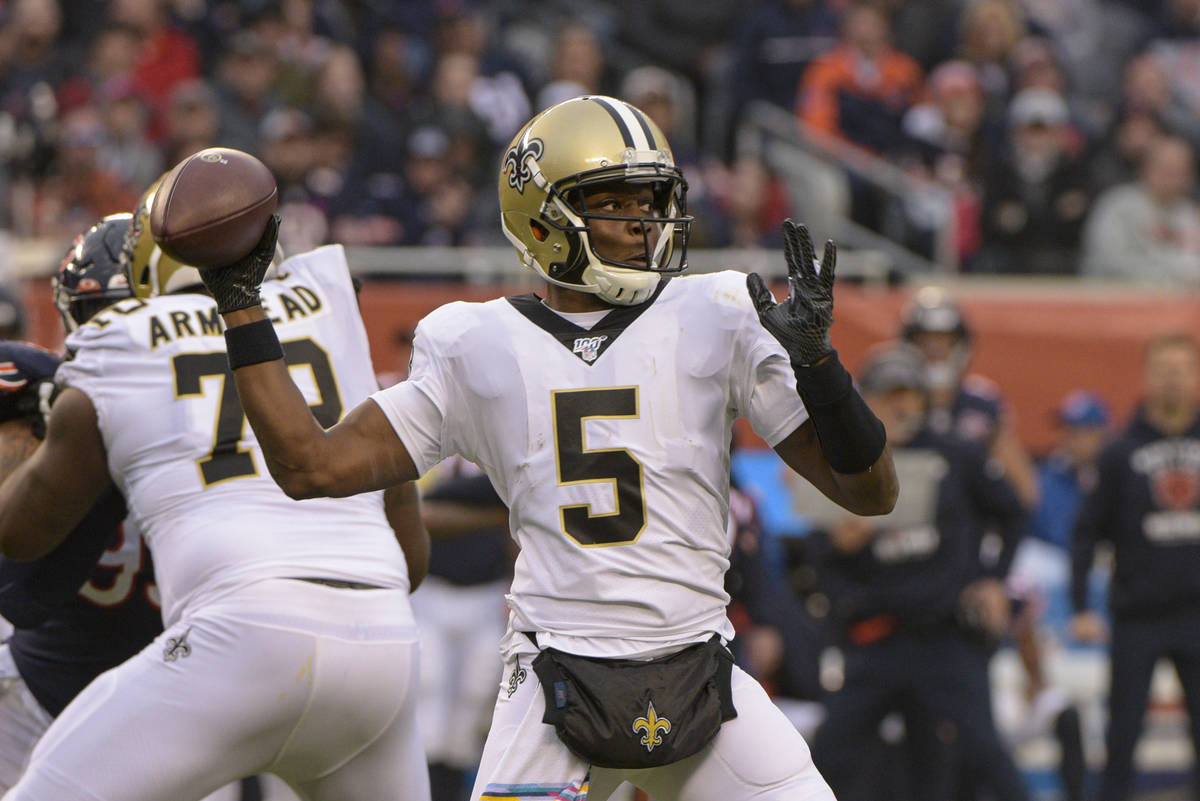 FILE - In this Sunday, Oct. 20, 2019 file photo, New Orleans Saints quarterback Teddy Bridgewater (5) throws against the Chicago Bears during the first half of an NFL football game in Chicago. Now that we know Philip Rivers won't be leading the Chargers into SoFi Stadium in September, the muddied waters of NFL quarterbacking have been cleared a bit. Assuming Drew Brees re-signs with New Orleans he's pretty much said he will and Teddy Bridgewater hits the open market, the only unknown in this sector is in Carolina.(AP Photo/Mark Black, File)

But with virtually every major sporting event postponed or canceled because of the coronavirus pandemic, the Circa team decided it was worth the risk to post something fresh for bettors to devour.

“I’m not sure they’re the sharpest numbers in the world,” Circa sportsbook manager Chris Bennett said. “But we wanted to get it out there and let people have fun with it.”

Circa posted their numbers Sunday with a $2,000 betting limit, and the next two days saw several high-profile players set to change teams, including quarterbacks Tom Brady, Philip Rivers, Teddy Bridgewater and Cam Newton.

Bennett said bettors have been wagering based on the free agent moves, but the book isn’t overly concerned, because he’s not sure any of those players, even Brady, can make a significant difference at this point in their careers.

The New England Patriots opened with a win total of 9 at Circa and were at 8½ on Tuesday afternoon after Brady announced he would play elsewhere next season. Amid multiple reports that the six-time Super Bowl champion is headed to Tampa Bay, the Buccaneers moved from 8½ (under -130) to 9½.

The only other total to move by a full game is the Carolina Panthers, who went from 4½ to 5½ (under -135) on the news that the team was likely to bring in Bridgewater and move on from Newton.

One move that took bettors by surprise was the Arizona Cardinals trading for star Houston Texans receiver DeAndre Hopkins. Circa had already taken two sizable bets on the Cardinals under 7 before the trade, Bennett said. After juicing the Cardinals to the under off the bets, the book moved them back to a flat 7 (-110 on both sides) after the trade, he said.

The Chiefs and Baltimore Ravens have the highest win totals at 11½ (over -115), and the Jacksonville Jaguars have the lowest at 4½.

As always, all 16 games must be played for action to stand on the win totals. Circa rules also state that the regular season must be completed by March 31, 2021, a move designed to accommodate a possible delayed start to the season because of the pandemic, Bennett said.