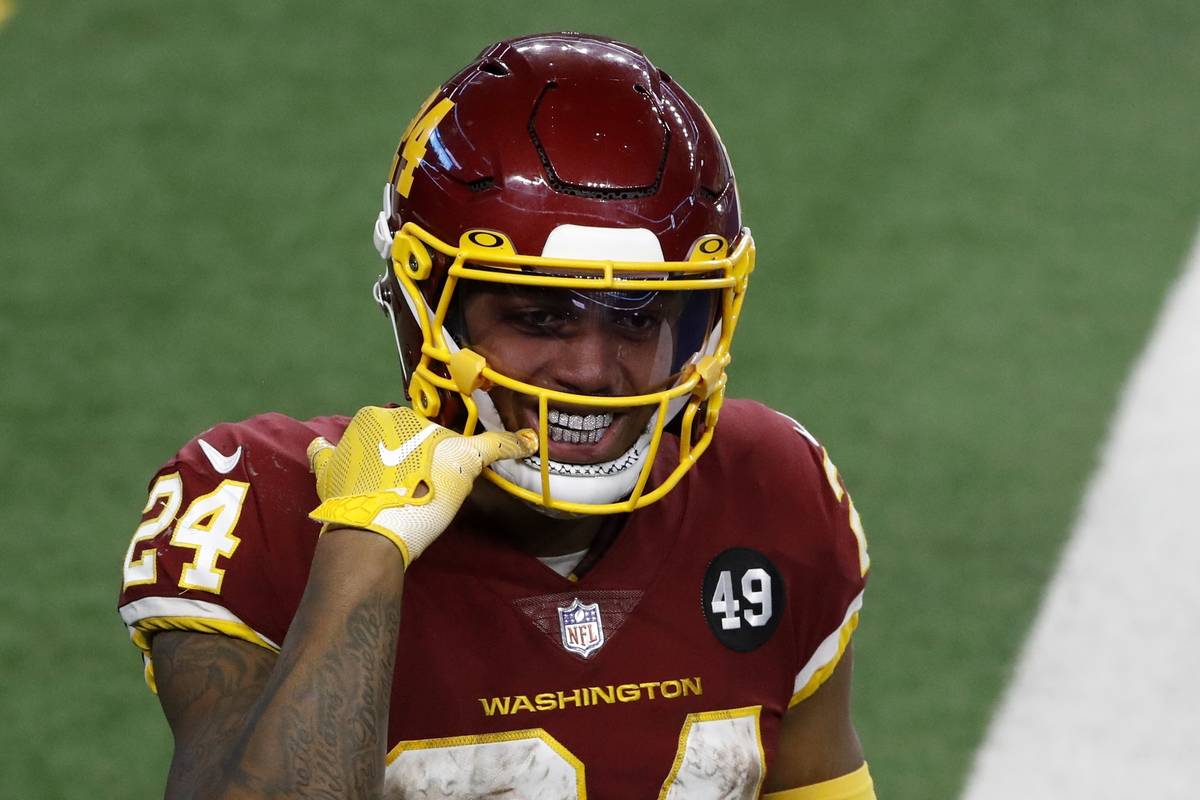 Washington Football Team running back Antonio Gibson (24) points to his mouth as he celebrates his touchdown in the second half of an NFL football game against the Dallas Cowboys in Arlington, Texas, Thursday, Nov. 26, 2020. (AP Photo/Roger Steinman)

Washington is a consensus 6-point underdog at undefeated Pittsburgh in a game that starts at 2 p.m. Pacific time. The total is 43½.

The Steelers opened as high as -10 and were at -7½ and -7 all week before moving under the key number over the weekend.

Circa sportsbook manager Chris Bennett said sharp bettors took Washington +9½, +7½, +7 and even +6½. Westgate sportsbook director John Murray said it took “a lot of sharp money” on Washington at +7½ and +7.

Station Casinos and William Hill also said the respected money was on Washington. They said the public was on the Steelers but that the ticket count was fairly balanced and the game was not a big decision.

Washington is 4-7 but can tie the New York Giants for first place in the NFC East with a victory. Washington has won two in a row and three of five after starting 1-5.

Pittsburgh (11-0) comes off a 19-14 win over rival Baltimore in a game that was delayed several times because of the coronavirus.

Washington will have a significant edge in rest. Pittsburgh played Wednesday, while Washington has been off since a 41-16 win over Dallas on Nov. 26.

In the second game, the 49ers are consensus 1½-point favorites over the Buffalo Bills in a neutral-site game in Glendale, Arizona. The total is 47½. San Francisco can’t play in its home stadium because of coronavirus restrictions.

The 49ers opened as high as +3 before the line shifted heavily in their direction.

The bookmakers reported sharp action on San Francisco. Bennett said sharp bettors at Circa took the 49ers on the money line, at +2½ and at pick’em. Murray said the Westgate took money at +2½ and +1.

The bookmakers said the public was on the Bills, but not significantly, and the game was also not shaping up as a major decision.

Bennett said Circa has also gotten “a lot of action on the Bills from lesser sharps, so we are in a good spot despite the big line move.”

The 49ers (5-6) stopped a three-game losing streak with a 23-20 victory last week at the Los Angeles Rams. San Francisco would be tied for the final playoff spot in the NFC with a victory.

The Bills (8-3) need a win to remain a game ahead of Miami in the AFC East. The Bills have won four of five, including a 27-17 victory over the Los Angeles Chargers last week.

Bookmakers usually have to worry about parlays from Sunday rolling over to Monday, but Sunset Station sportsbook director Chuck Esposito said enough underdogs won Sunday to limit parlay liability on the Monday games.