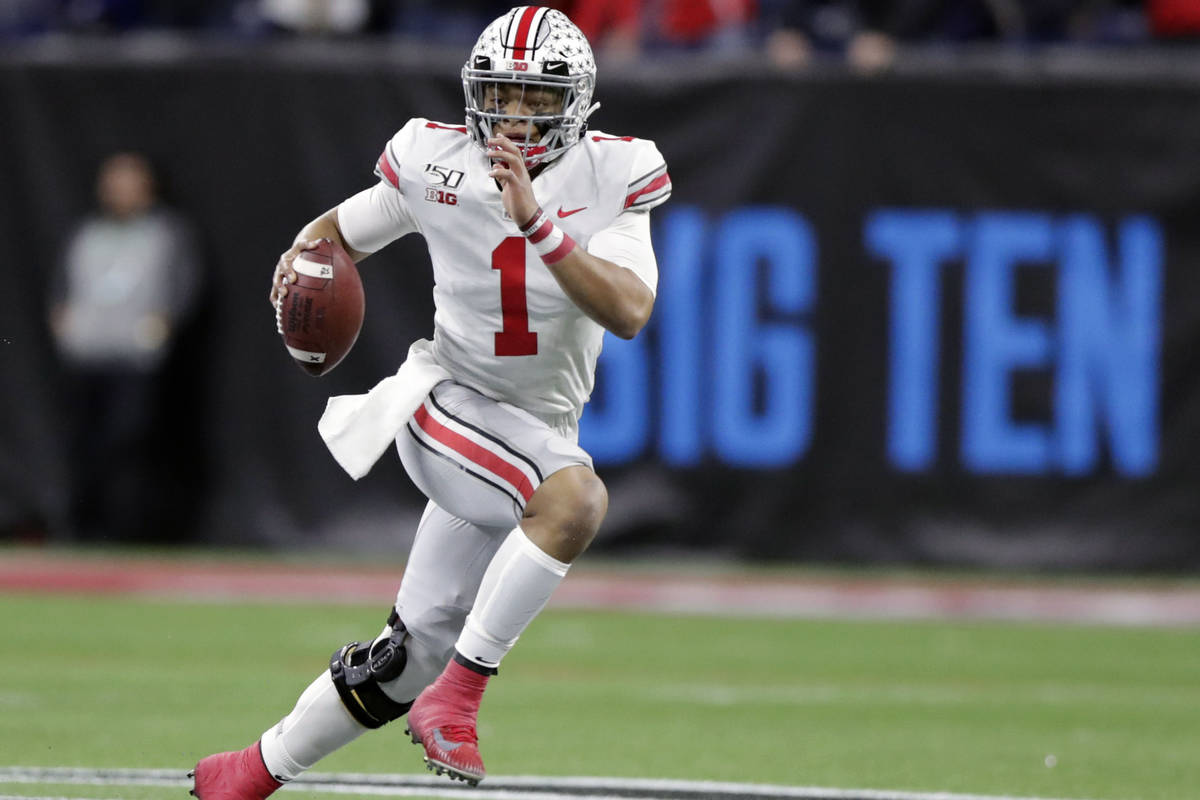 In this Dec. 7, 2019, file photo, Ohio State quarterback Justin Fields (1) runs with the ball against Wisconsin during the first half of the Big Ten championship NCAA college football game, in Indianapolis. (AP Photo/Michael Conroy)

Nebraska at Ohio State (-26): Ohio State has won the last four meetings straight up and is 3-1 ATS in those games with the cover wins all by 41 or more points. The Huskers’ only straight-up win against the Buckeyes since entering the Big Ten came in 2011. Nebraska was 1-4 ATS on the road last season and 1-3 as an underdog. The Buckeyes are 6-2 ATS in their last eight home games. Edge: Ohio State.

Notre Dame (-10½) at Pittsburgh: The Fighting Irish are 11-7 against the spread since 2019 (1-3 this season) but 2-3-1 in their last six games as road favorites. Pittsburgh was 8-3 in its past 11 games as an underdog and 5-2 in its last seven as a home underdog before last week’s game with Miami (with a spread result depending upon when the game was bet). The Panthers are 4-1-1 ATS in the series since 2010. Edge: Pittsburgh.

Alabama (-21) at Tennessee: The Volunteers haven’t beaten Alabama straight up since 2006. Alabama has covered nine of 13 meetings since and is 6-3 in its last nine games against the spread. Tennessee covered its last five games as an underdog last season but dropped its first game in the role this year. Edge: Alabama.

Syracuse at Clemson (-46½): Syracuse is 2-5 ATS in its last seven road games but has covered four of the past six against Clemson. The Orange are 1-4 in their last five games as double-digit underdogs. Clemson is 8-1 ATS in its last nine as a home favorite. Edge: Clemson.

Baylor at Texas (-9): Texas coach Tom Herman is 1-2 ATS against Baylor, and the Longhorns are 4-7 against the spread in their last 11 games. Texas is 1-4 ATS in its last five home conference games. Edge: Baylor.

Iowa State at Oklahoma State (-3½): Coach Matt Campbell is 19-9-1 as an underdog with Iowa State (1-0 this season). The road underdog has won outright in the last three games in the series, and the visitor has covered five in a row. Oklahoma State is on a 13-4 spread run. Edge: Iowa State.

UNLV at San Diego State (-14½): The Rebels were 17-10 as road underdogs in the Tony Sanchez era and have covered the last two games against the Aztecs. San Diego State is 4-10 ATS in its last 14 conference home games. Edge: UNLV.