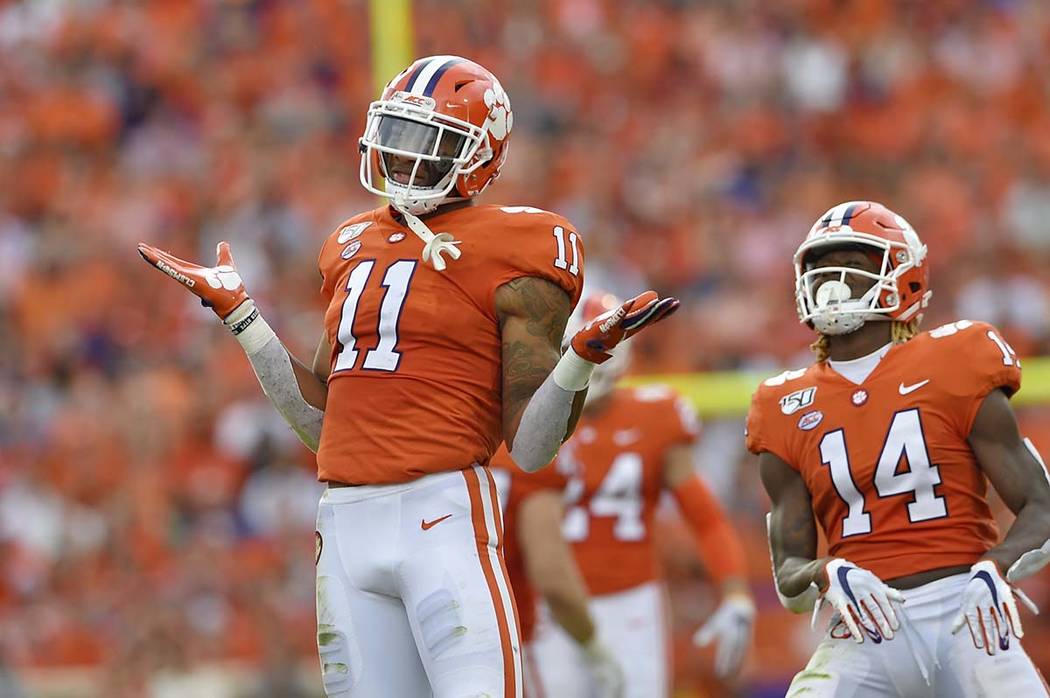 In this Oct. 12, 2019, file photo, Clemson's Isaiah Simmons (11) and Denzel Johnson react after making a defensive play during the first half of an NCAA college football game against Florida State, in Clemson, S.C. Simmons was selected to The Associated Press All-Atlantic Coast Conference football team, and named Defensive Player of the Year, Tuesday, Dec. 10, 2019. (AP Photo/Richard Shiro)

North Carolina (-5½) vs. Temple (Military Bowl): North Carolina is 2-3-1 as a favorite this year and 2-3 against the spread away from home. Temple covered its last four games and is 8-4 ATS this season, and 4-2 as an underdog. Temple coach Rod Carey was 0-6 straight up and ATS in bowls with Northern Illinois. Edge: North Carolina.

Iowa State vs. Notre Dame (-3) (Camping World Bowl): Iowa State dropped four of its last five ATS, but coach Matt Campbell is 18-8-1 as an underdog with the Cyclones. The Irish are 2-5 ATS in their last seven bowl games. Edge: Iowa State.

Clemson (-2) vs. Ohio State (Fiesta Bowl): Clemson is 9-1 ATS in its last 10 bowl/playoff games, including two wins and covers against the Buckeyes. The Tigers are on a 13-3 spread run. Ohio State is 9-4 ATS this season, and 1-2 ATS in its last three bowl games. Edge: Clemson.

Illinois vs. California (-6½) (Redbox Bowl): California is 1-4 as a favorite this season and 2-9-1 in the role since last season. The underdog is 13-4-1 ATS in the last 18 Golden Bears games. Illinois covered six of its last seven games and is 7-1 in its last eight as an underdog. Edge: Illinois.

Virginia vs. Florida (-14½) (Orange Bowl): The Gators have covered their last three games and seven of their last nine and are on a 16-7 spread run. Virginia is 7-3 as an underdog since last season. Edge: Slight to Florida.

Kansas State vs. Navy (-2½) (Liberty Bowl): The Wildcats are 9-3 ATS this season and 6-1 as underdogs. Kansas State is on a 15-5 spread run. The Midshipmen are on a 13-3 spread run, and have covered their last five bowl games. Edge: Slight to Navy.

Georgia State vs. Wyoming (-7) (Arizona Bowl): Wyoming is 2-0 ATS in bowl games under Craig Bohl. The Cowboys are 6-2 in their last eight games as favorites. Edge: Wyoming.

Michigan vs. Alabama (-7) (Citrus Bowl): The Wolverines covered five of their last six games, but are 0-3 straight up and ATS in their last three bowl games. Alabama is 3-7 ATS in its last 10 bowl games, but is on a 7-4 spread run in nonconference games. Edge: Slight to Alabama.

Minnesota vs. Auburn (Outback Bowl): The Gophers cooled a bit at the end of season (0-2-1 ATS) after going 9-0 straight up to start the season. Minnesota is 3-0 straight up and ATS in its last three bowl games. Auburn is on a 10-3 spread uptick and has covered its last six nonconference games. Edge: Slight to Auburn.

Baylor vs. Georgia (-6) (Sugar Bowl): Baylor coach Matt Rhule is on a 13-5 spread run and is undefeated in his last eight as an underdog. The Bulldog are 5-1 in their last six bowl/playoff games. Edge: Baylor.

Boston College vs. Cincinnati (-7) (Birmingham Bowl): The Eagles are 5-2 as underdogs this season and 13-4-1 in the role since 2017. They are 6-3 ATS in their last nine away from home. Cincinnati hasn’t covered its last four bowl games. Edge: Boston College.