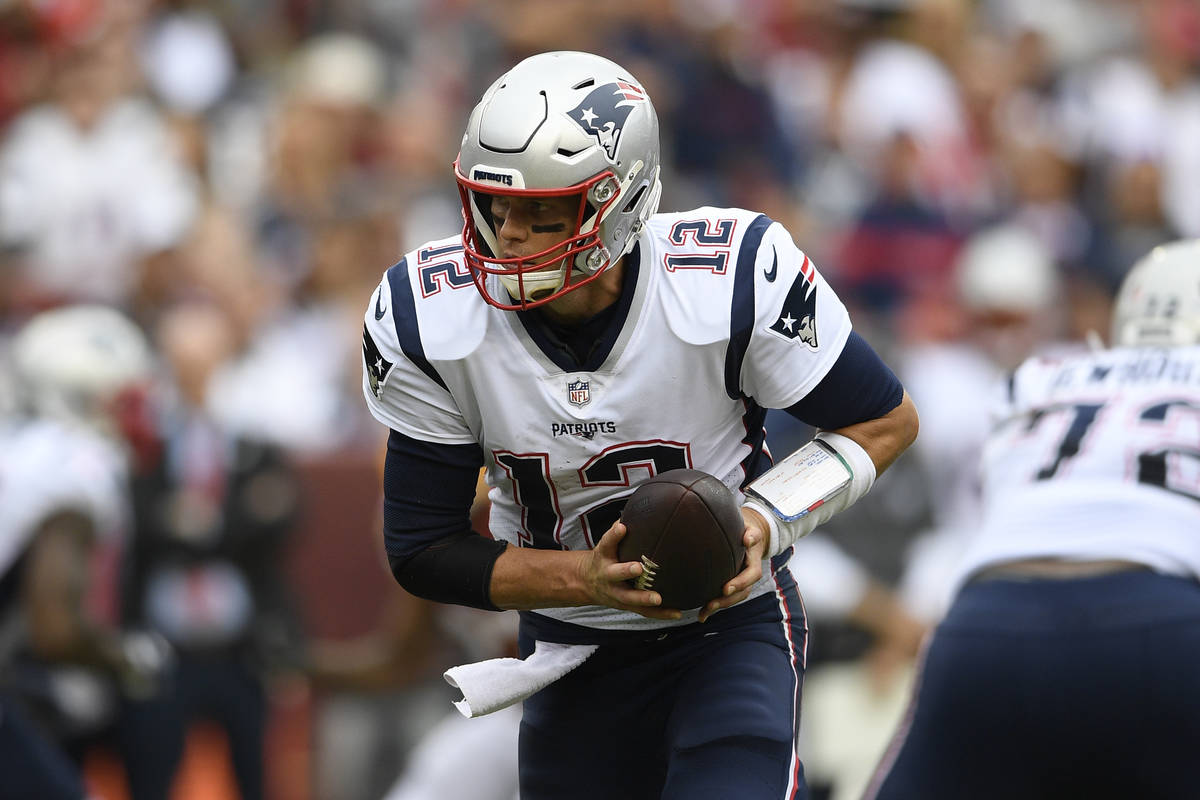 New England Patriots quarterback Tom Brady (12) during the second half of an NFL football game against the Washington Redskins, Sunday, Oct. 6, 2019, in Washington. (AP Photo/Nick Wass)

Tom Brady hasn’t missed a start because of an injury since 2008, when a Week 1 torn ACL ended his streak of 111 consecutive starts.

Brady’s durability at age 43 next season as Tampa Bay’s starting quarterback will probably determine the outcome of his season prop bets posted at Circa Sports.

“If he does get injured at some point, there might be a likelihood of them going under,” Circa sportsbook manager Chris Bennett said. “He’s been very durable. But you’ve got to consider the possibility of Brady playing less than 16 games.”

Here are Brady’s props, with the only stipulation being that he must play in Week 1: 4,200½ passing yards, 29½ touchdown passes, 8½ interceptions, 19½ rushing yards and 1½ rushing TDs.

“When we do quarterback rushing yards props, those tend to be the most popular,” Bennett said. “Even though Brady doesn’t run much at all, we thought it would be interesting to put up.

Brady appeared in one game in his rookie year of 2000 and missed all but the opener of the 2008 season. In his 18 full seasons as a starter, he averaged 57.6 yards rushing and ran for at least 28 yards in 17 of 18 years, including the past six.

The master of the quarterback sneak, Brady scored two rushing TDs on sneaks in the same game last season in New England’s 35-14 win over the New York Giants. According to an Oct. 25 story in the Boston Globe, Brady has sneaked 175 times and converted 82 percent of the time, with 16 TDs.

He had three rushing TDs last season, two in 2018 and has had at least two rushing TDs in three of the past five years and five of nine.

Brady has averaged 4,142 yards passing with 30 TD passes and 9.9 interceptions in his 18 full seasons.

Former Buccaneers quarterback Jameis Winston threw for 33 TDs last season, when he led the NFL in passing yards (5,109) and interceptions (30).

“I don’t think it’s going to be the same type of air-it-out offense as it was last year,” Bennett said. “Brady definitely has better receivers, but I expect him to throw shorter passes. A lot has to happen for him to go over.”

“He rarely took shots when he played with New England, but with (Tampa’s) line, he’s going to take a ton of hits this year, I guarantee you that,” Salmons said. “Odds are he breaks down.”