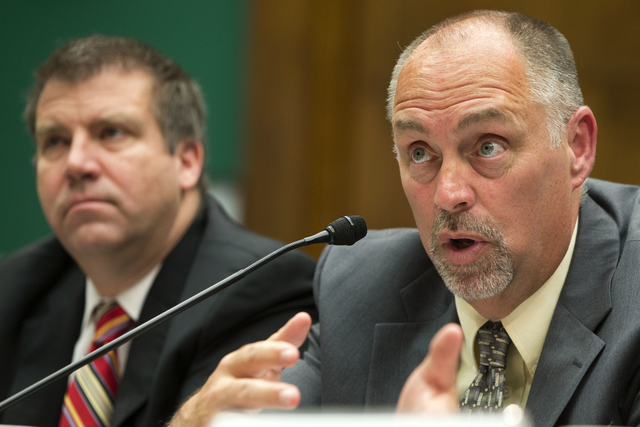 FanDuel and DraftKings, the largest daily fantasy sports operators in the country, are angling to return to the Nevada market and a representative will make a presentation to the Nevada Gaming Policy Committee next week.

Scott Ward, a public policy attorney with the Washington-based Orrick law firm, is expected to address the committee Tuesday on proposed legislation establishing a framework for regulating daily fantasy sports in the state.

Orrick recently assisted the fantasy sports industry to lobby for passage of legislation legalizing companies in New York, one of the nation’s largest fantasy sports markets.

FanDuel and DraftKings abandoned the Nevada market in October when regulators and Attorney General Adam Laxalt issued an opinion that daily fantasy sports is a form of gambling and that game operators are required to be licensed.

After the opinion was issued, FanDuel and DraftKings, who say daily fantasy sports is a game of skill and not chance and thus not gambling, voluntarily agreed not to allow Nevada players to participate in their games.

Regulators said daily fantasy sports operators are welcome to seek licenses under existing sports book or sports pool regulations, but the companies have opted not to apply.

Ward said Thursday the proposed legislation produced by the daily fantasy sports industry was an amalgamation of laws that have successfully been approved in 10 states and that the industry believes would work in Nevada.

He said the industry considers the end product to be a “fantasy sports license” and not a gaming license.

He said industry officials are disappointed they’ll miss the 2016 National Football League season in Nevada since the Legislature doesn’t meet until February, but that they understand the system.

If embraced by the 12-member committee responsible for vetting innovations in the gaming industry ahead of possible legislation, the proposal could go to the Nevada Legislature for consideration.

But some aspects of the proposal could face an uphill battle based on current policy.

The legislation proposes allowing persons 18 and older to play. In Nevada, the legal age to gamble is 21.

The legislation also proposes a $500 application for licensure and annual licensure renewals of the lesser of $10,000 or 5 percent of an operator’s gross fantasy game revenue for the preceding 12 months. Most gaming licenses don’t require renewal fees, but the state receives tax revenue from continuing operations.

The committee, headed by Gov. Brian Sandoval with members of the state’s two gaming regulatory boards, legislators and industry leaders, addressed fantasy sports when it met in March and at the time, Sandoval encouraged DraftKings CEO Jason Robins and FanDuel CEO Nigel Eccles to offer their own proposals for consideration.

“The industry is very appreciative of Gov. Sandoval inviting us to make this proposal,” Ward said, “and we think the end result will be our ability to return and operate in Nevada.

When the committee meets at 9:30 a.m., at Las Vegas City Hall council chambers, it will receive an update on daily fantasy sports legislation in other states as well as a financial analysis of fantasy sports proposals in Nevada.