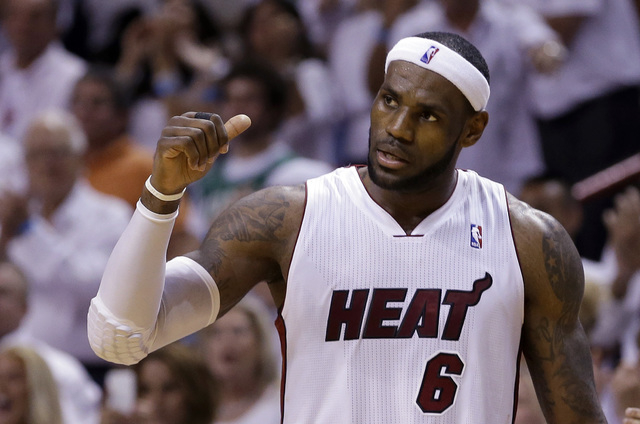 A year after LeBron James and the Miami Heat stunned the Spurs with a dramatic Finals comeback, it’s time to play it again. (AP Photo)

A showdown between LeBron James and the San Antonio Spurs is not only deja vu, it’s a dream NBA Finals matchup in almost every sense.

Bookmakers looking for a major wagering handle should get their wish. Bettors are getting two attractive options, whether they prefer the game’s most dominant player or the team with the league’s top record.

There is the revenge angle. There is historical significance. And there are plenty of proposition bets to entertain. James, who affects all aspects of a game, is perfect for props and the ideal drawing card to pull in the public. He’s also in the underdog role, which is rare.

A year after James and the Miami Heat stunned the Spurs with a dramatic Finals comeback, it’s time to play it again.

“It was so closely contested last year, and I think this series will attract more betting action,” LVH sports book oddsmaker Jeff Sherman said. “The series price is so short, it’s going to split a lot of people’s opinions. Both sides are being supported. We’ve got more public money on the Heat.”

The Spurs are minus-135 favorites with home-court advantage in the best-of-7 series, which opens today with San Antonio as a 4- to 4½-point favorite.

“This is the best team on the planet against the best player on the planet,” Sportsmemo.com handicapper Erin Rynning said. “Obviously, the X-factor is LeBron. He has got to play out of his mind for Miami to win four games, which is possible.”

Sherman’s forecast is for the Spurs to win the series in seven. His only hesitation is the status of point guard Tony Parker, who is nursing a left ankle injury. Parker said he’s not 100 percent but plans to play in the opener.

“Parker is the biggest key to the series,” Sherman said. “If Parker is not healthy and productive out there, I wouldn’t be looking to support San Antonio. It’s going to be a tough series. I don’t think the Spurs are just going to roll over LeBron.”

“Part of my thinking in liking the Spurs is because of the format change,” Sherman said. “I think that’s favorable for the team with home-court advantage.”

Rynning also is siding with the Spurs, citing Gregg Popovich’s coaching edge, and Tim Duncan and Tiago Splitter’s size advantage inside, among other factors.

“I have the Spurs rated 2½ to 3 points better,” Rynning said. “I think Miami is weaker than the past two years. Every way I look at it, I feel very strongly the Spurs are going to win this.”