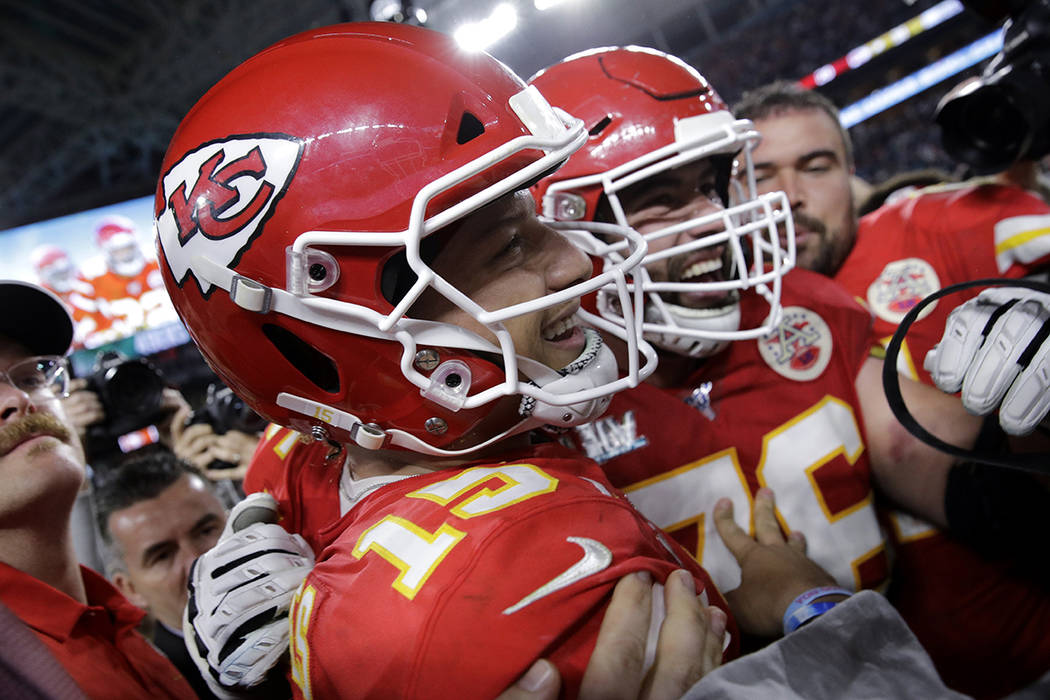 The Monday and Tuesday after the Super Bowl are the two busiest days of the year for Super Bowl futures bets at the Westgate sportsbook.

“Everybody cashing Super Bowl tickets now will bet something on their way out,” Westgate vice president of risk Ed Salmons said Monday afternoon. “We’ve taken bets on literally every team.”

“The Cowboys are a team I’m high on, so I lowered them and raised some other teams,” Salmons said. “Any coach besides Jason Garrett is a huge improvement.”

The Kansas City Chiefs were 7-1 favorites to win the 2021 Super Bowl before they rallied for a 31-20 win over the San Francisco 49ers on Sunday in Super Bowl LIV.

Expecting plenty of action on the Chiefs to repeat as Super Bowl champs, the Westgate reopened Kansas City as the 5-1 favorite Monday to win Super Bowl LV.

“People remember what they just saw and they think (Chiefs quarterback Patrick) Mahomes is going to win a lot of Super Bowls like (Tom) Brady did,” Salmons said. “The Chiefs won the Super Bowl so they should be the favorite next year. As long as they have Mahomes, you’d certainly think they would be in the mix.”

The Niners and Baltimore Ravens are tied for the second choice at 8-1.

“They both should be really good,” Salmons said. “The Ravens look like they’re here to stay now. (John) Harbaugh’s a great coach.

The New Orleans Saints are 10-1 and the New England Patriots are 12-1.

“The Saints are built for the long term. Even if Drew Brees were to leave, they didn’t lose a game with Teddy Bridgewater last year and Taysom Hill was awesome at quarterback,” Salmons said. “I always expect the Patriots to be in contention. The Patriots are definitely in decline. It’s just how much.”

The Steelers are 18-1 and one of Salmons’ sleepers to win it all.

“If you can get 20-1 or higher, I think Pittsburgh offers the most value next year,” he said. “That was a high school offense without (QB Ben) Roethlisberger. Put him back in and they have a really strong offensive line and great receivers — though you couldn’t tell with those high school quarterbacks who were playing.

“Pittsburgh is a legitimate top-five NFL defense, if not top three. Their defense is awesome.”

The Philadelphia Eagles, Green Bay Packers and Seattle Seahawks are at 20-1, and the Los Angeles Rams, Chicago Bears and Minnesota Vikings are at 25-1.

The Raiders are in a pack of seven teams at 40-1. The others are the Browns, Los Angeles Chargers, Houston Texans, Tennessee Titans, Buffalo Bills and Indianapolis Colts.

“Another team that has a chance to be really good next year is the Colts,” Salmons said. “They had a lot of bad losses mixed in with a lot of injuries this year. Through the draft and free agency, the Colts really have a chance to jump up, win the (AFC South) division and be a contender.

“There’s just so many teams. The parity in this league is just ridiculous.”

The Washington Redskins have the longest odds to win Super Bowl LV at 200-1.

Nevada’s Super Bowl handle — or amount wagered on the game — wasn’t released Monday, as expected, by the state’s Gaming Control Board. NGCB research analyst Michael Lawton told VSiN that one licensee was having “technical difficulties” and unable to file its report, so the figures couldn’t be finalized.