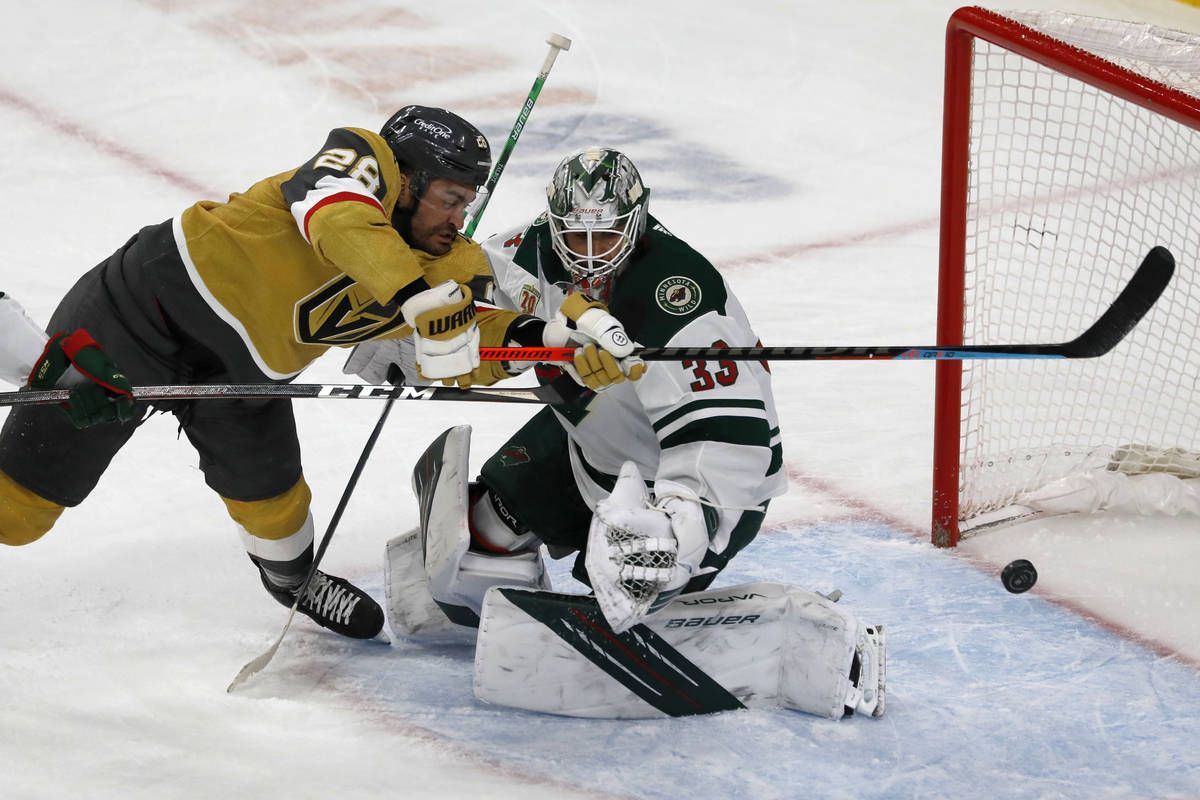 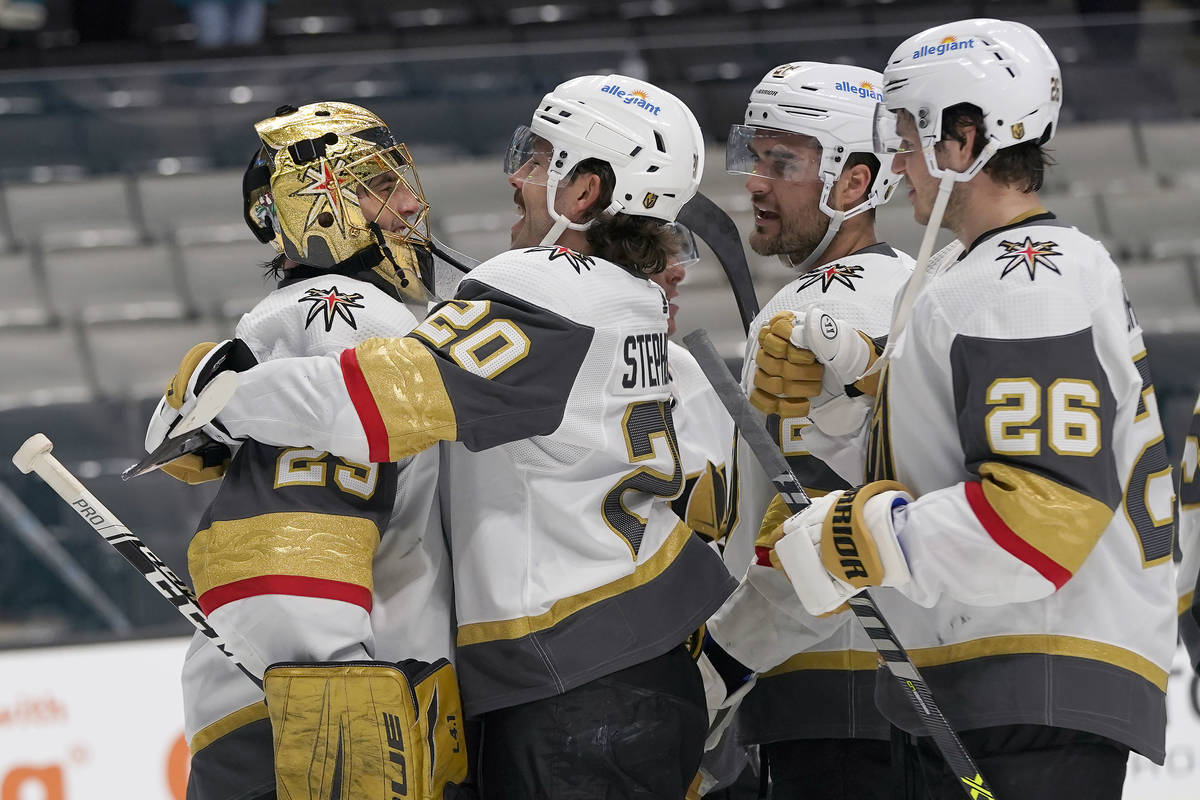 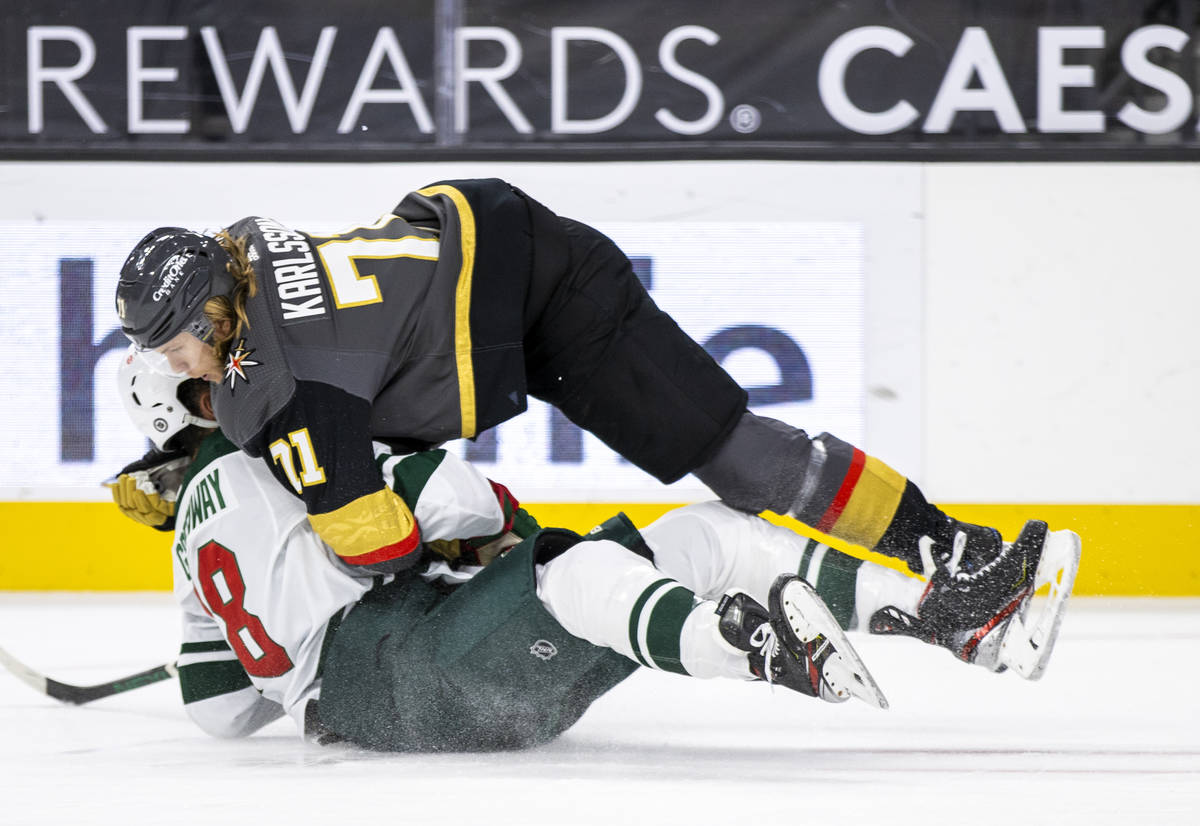 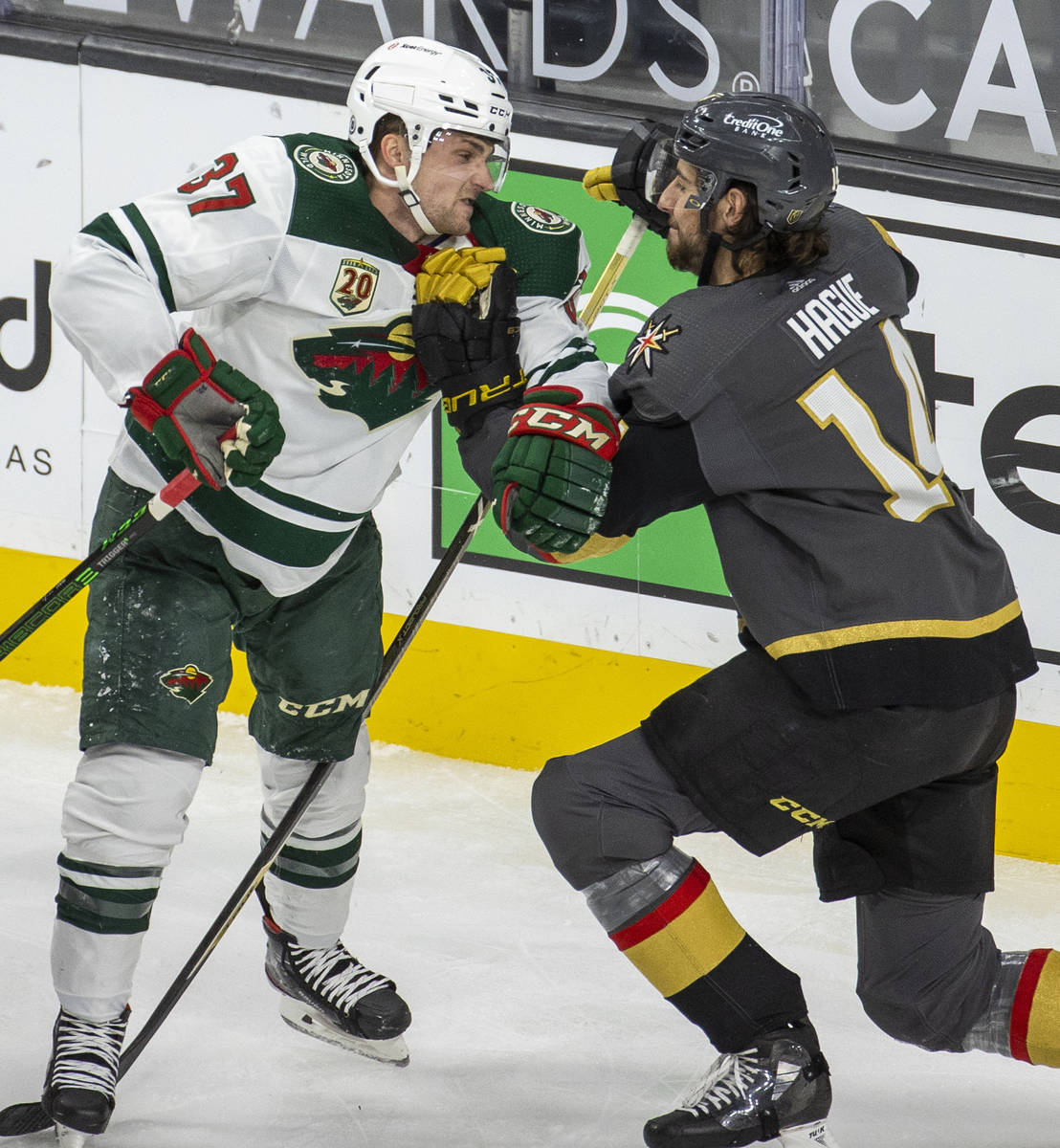 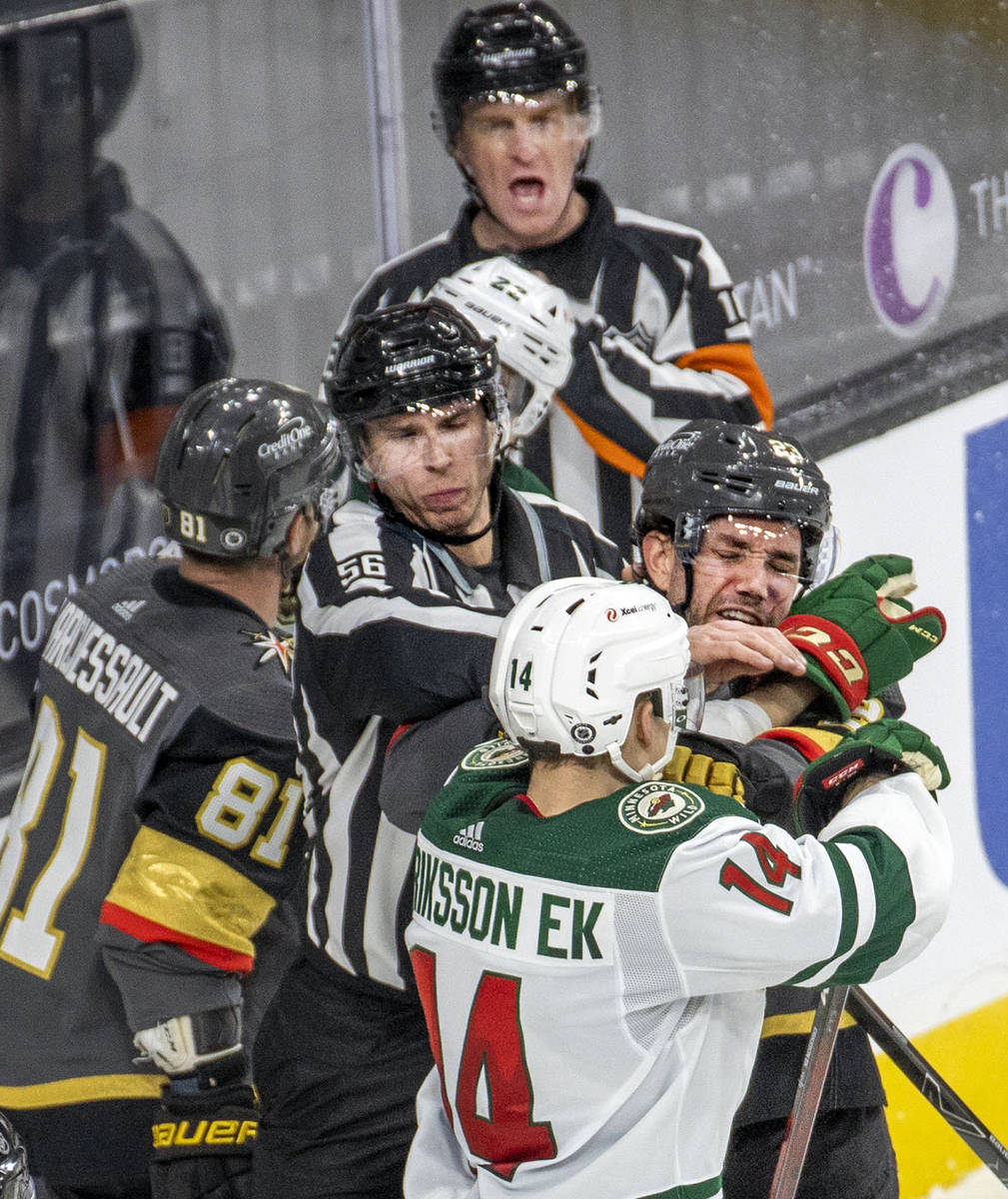 Golden Knights defenseman Alec Martinez (23) and Minnesota Wild center Joel Eriksson Ek (14) have a fight broken up by a referee during the overtime period of an NHL game at T-Mobile Arena on Thursday, April 1, 2021. L.E. Baskow/Las Vegas Review-Journal) @Left_Eye_Images

Not winning the Presidents’ Trophy might be a blessing in disguise for the Golden Knights.

Only two of the past 18 winners of the trophy, awarded to the team with the most points in the regular season, have gone on to win the Stanley Cup.

Colorado and Vegas tied for the most points in the shortened 2020-21 season, with 82 apiece in 56 games.

But the Avalanche claimed the No. 1 seed in the West Division and home-ice advantage throughout the playoffs on a tiebreaker (most regulation wins).

The Knights will need to get past the pesky Minnesota Wild to set up a possible showdown with the Avalanche for a trip to the Stanley Cup semifinals.

Vegas went 3-5 against the Wild in the regular season, with one win coming in overtime and another in a shootout. But Westgate sportsbook vice president of risk Ed Salmons expects the Knights to advance. Vegas is a -250 series favorite over Minnesota.

“The Knights have always struggled with the Wild. The Wild are more than capable of beating the Knights,” he said. “But I think the Knights will find a way to win that series. It will be a tough six- or seven-game series, but ultimately the Knights have more pedigree and are just more experienced.

“I think they’ll wear the Wild down. It will definitely be a more dangerous series than a Blues series (would have been). But sometimes that can do you good.”

Colorado is a -390 series favorite over St. Louis.

On paper, the winner of a Vegas-Colorado series would have a solid chance to hoist the Cup. The Avalanche are the favorites to win the Stanley Cup at BetMGM, Circa and the Westgate, with their best price +450 at MGM. Vegas is the favorite at William Hill and Station Casinos, with its best price +550 at MGM.

Colorado is an even-money favorite to emerge as the West divisional playoff winner at MGM, and Vegas is +115. But Salmons projects the Avalanche to be series favorites over the Knights in the range of -170 to -200.

“The Knights will definitely be the biggest (underdogs) they’ve ever been in a playoff series against Colorado,” he said. “The Avalanche are going to be decent-sized favorites, just because their power rating is higher than the Knights.

“I would say right now Colorado is No. 1, the Knights No. 2 and Tampa Bay No. 3. Whichever team makes it through, Colorado or the Knights, those two teams figure to be favored over anyone.”

Vegas also is one of the largest liabilities at Station Casinos and William Hill, though it pales in comparison to the team’s inaugural 2017-18 season, when Las Vegas books would have lost more than $5 million if the Knights had won the Stanley Cup.

“We’re a small loser with the Knights,” William Hill sportsbook director Nick Bogdanovich said. “It’s not the end of the world if they win it. It would be nice for the town if they did.”

“They have as good a chance as anybody because of their goaltending,” he said. “In hockey, any time a goaltender can stand on their head, they can win a series or two or even the Cup. And I don’t think there’s a better tandem in the league than (Marc-Andre) Fleury and (Robin) Lehner.

“To me, they’re a different team with (Alex) Pietrangelo on the back end. They’re just a much faster team, and they have a huge edge in goaltending.”