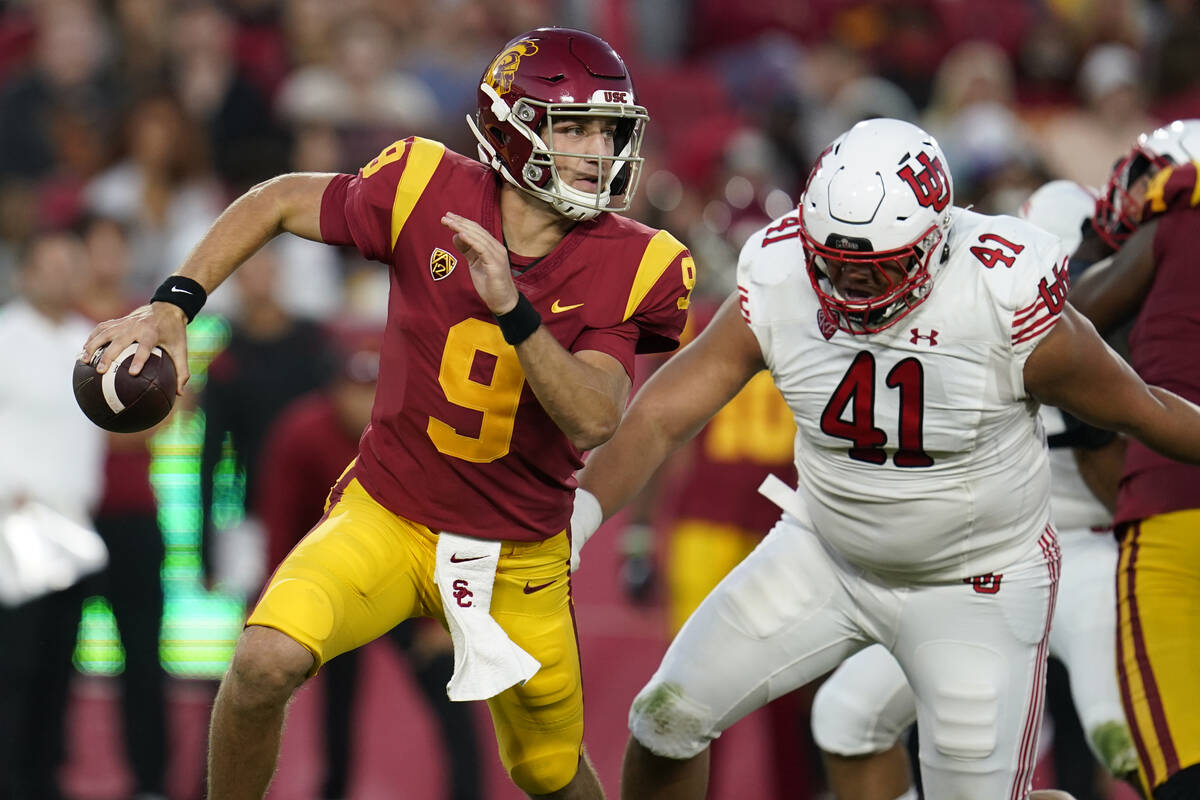 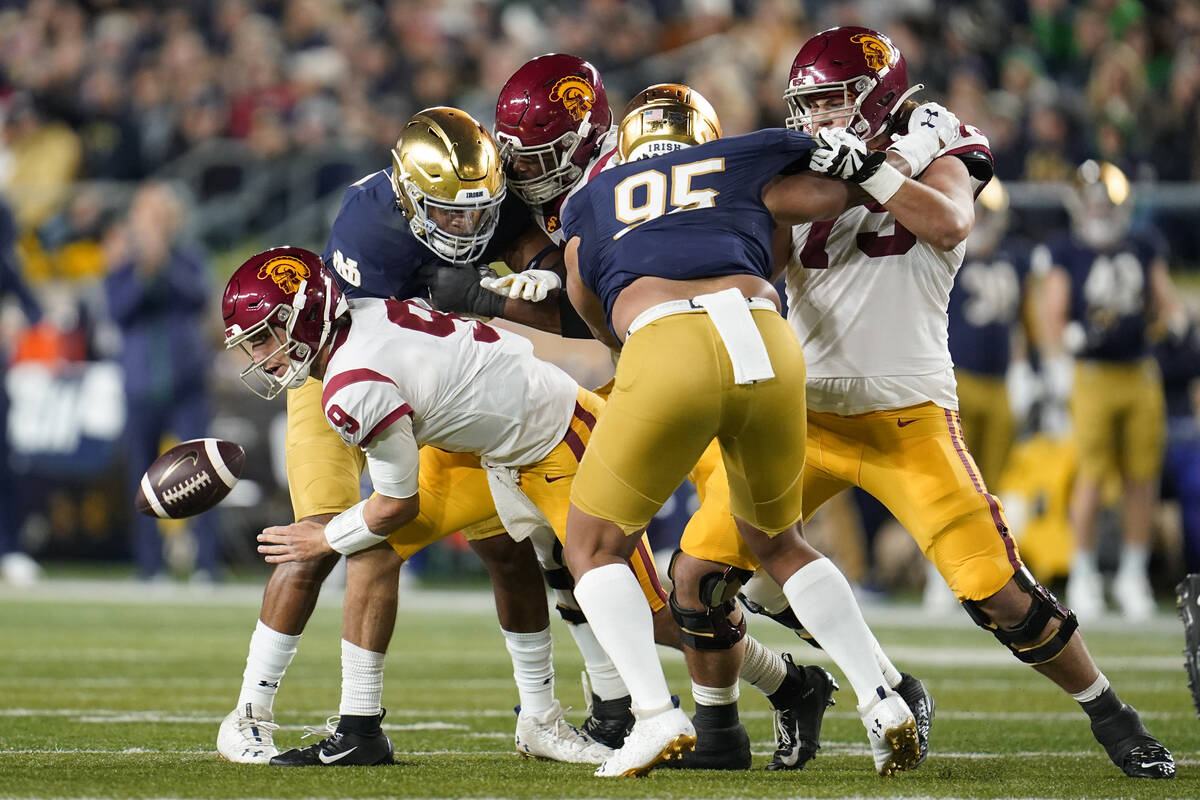 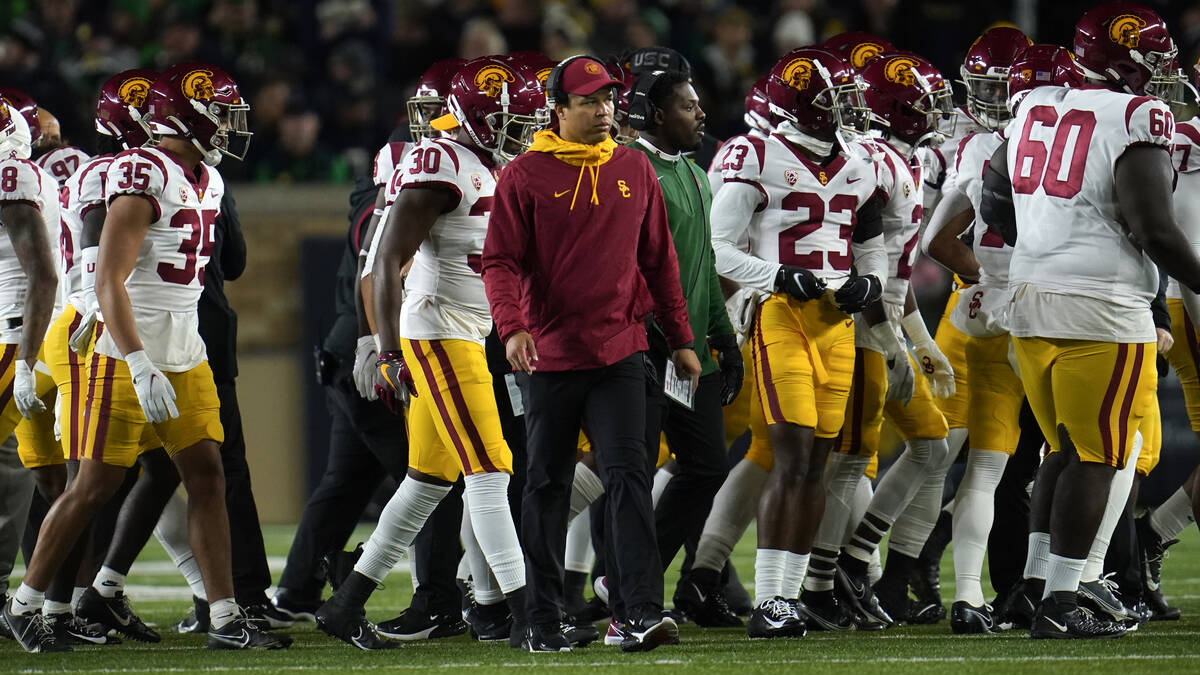 Southern California head coach Donte Williams with his team during a time out against Notre Dame in the first half of an NCAA college football game in South Bend, Ind., Saturday, Oct. 23, 2021. (AP Photo/Paul Sancya)

Southern California isn’t a good college football team, but you can count on the Trojans to beat up lesser competition.

Now the Trojans welcome the worst team in the Pac-12 to Los Angeles on Saturday for what should be a beatdown.

Arizona is on a 19-game losing streak, the longest in the nation. The Wildcats haven’t won since Oct. 5, 2019.

Arizona gave an all-out effort last week but couldn’t hold off Washington in a 21-16 loss. It’s difficult to see the Wildcats being able to muster a similar performance on the road against USC.

Bettors normally would be loathe to ask an under-.500 team such as the Trojans to cover 21, but that tells you just how outmatched Arizona is.

— Michigan State +4: Despite some shaky performances, the Spartans have been a covering machine this season, and they broke a few sharps’ hearts when they somehow won -4½ in a 20-15 victory at Indiana two weeks ago. I’ll still happily look to fade Michigan State down the stretch, but +4 is too enticing with the No. 8 Spartans for Saturday’s top-10 matchup with rival No. 6 Michigan. Like Michigan State, the Wolverines have covered in all but one game this season, but this should turn into a grinding, defensive battle. Take more than a field goal with the home underdog.

— Florida Atlantic -11: It has been a magical season for Texas-El Paso, which has clinched bowl eligibility for the first time since 2014. But the Miners’ wins have come against the dregs of college football — New Mexico State, Bethune-Cookman, New Mexico, Old Dominion, Southern Mississippi and Louisiana Tech. When UTEP faced a team with a pulse, Boise State won 54-13. Florida Atlantic is no great shakes, but in the Owls’ three home games this season, they’ve won 38-6 against Georgia Southern, 45-14 against Fordham and 58-21 against Florida International. It’s hard to see the Miners, who have already accomplished their season goal, keeping up.

— Rutgers -1½: A “this line doesn’t look right” special. The Scarlet Knights have lost four in a row, but they’re favored on the road over an Illinois team that just won at Penn State? Three of those Rutgers losses were to undefeated Michigan, Ohio State and Michigan State. If the Scarlet Knights can find any kind of offense, they should take care of the Illini.