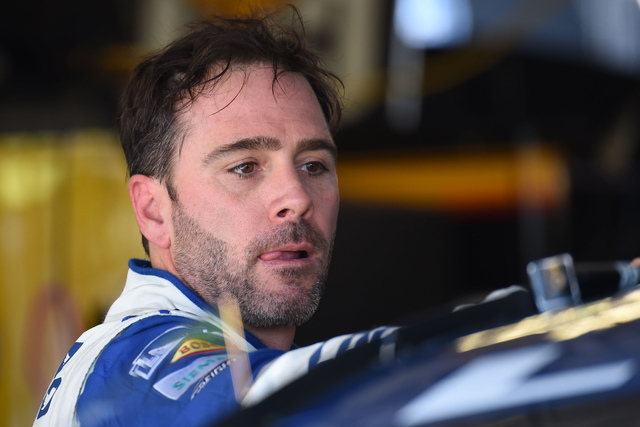 Jimmie Johnson prepares to go back out on the track during Sprint Cup Series afternoon practice at Kansas Speedway in Kansas City, Kan., Friday, May 6, 2016. (AP Photo/Reed Hoffmann)

But there are plenty of logical reasons to suggest they won’t win. For starters, only one of those victories came on a 1.5-mile track.

Three races this year — Atlanta, Las Vegas and Texas — have been on 1.5-mile tracks, and one (Fontana) has been on a two-mile layout. The new low downforce package is being run on all nonrestrictor-plate tracks, but it has the most profound effect on these types just because of the high speeds.

Among those four races, Jimmie Johnson won twice and was at least fourth in the other two. He’s the only driver with top-fives in those races.

He’s been at his best on these types of tracks during his career, and the new package allows him to have additional freedom to create more speed coming in and out of turns. He maximizes it well, especially late in races.

Johnson has a series-best three wins at Kansas and a track-best 8.7 average finish. He’s finished ninth or better in 13 of his past 14 starts there.

It’s why he’s a 5-1 favorite despite the stellar JGR practices. Johnson had the fourth-fastest lap during the final practice and the fastest 10-consecutive lap average during the early session.

There are probably 14 drivers who can legitimately win this race. Only Joe Nemecheck’s win starting from the pole in 2004 saw a payout at Kansas above 20-1. The other 19 races have been won from drivers at 12-1 odds or less. So among those pool of drivers this week, the best value might be Joey Logano at 8-1. After a rocky start to his Kansas career with no top-10s in his first eight starts, he’s had top-five finishes in his past five, including wins in two of three. Don’t worry about his mediocre practice times. Some drivers are comparing the Las Vegas grip to Kansas, and it should be noted that Team Penske finished 1-2 in March at Las Vegas Motor Speedway.

Will Matt Kenseth finally get a win this week? How about just a top-five? He’s getting great cars every week, but misfortune seems to find him often. There should be comfort in seeing odds of 8-1 for Kenseth, who has two Kansas wins. Last fall, he led 153 laps before Logano punted him late, which essentially ended Kenseth’s championship run. In his final practice Friday, Kenseth had the best 10-consecutive lap average.

It’s taken only the first 10 races for sports books to take rookie Chase Elliott serious. His driver rating has been climbing weekly, and his odds to win this week are 15-1. He had been regularly in the 25-1 range. He has three top-five finishes in his past four starts and is 11th in the Sprint Cup standings. His best finish on a 1.5-mile track was eighth at Atlanta, and he was sixth at Fontana. His No. 24 crew won three times at Kansas with Jeff Gordon driving.

Micah Roberts, a former Las Vegas sports book director, has been setting NASCAR odds since 1994. Follow him on Twitter @MicahRoberts7