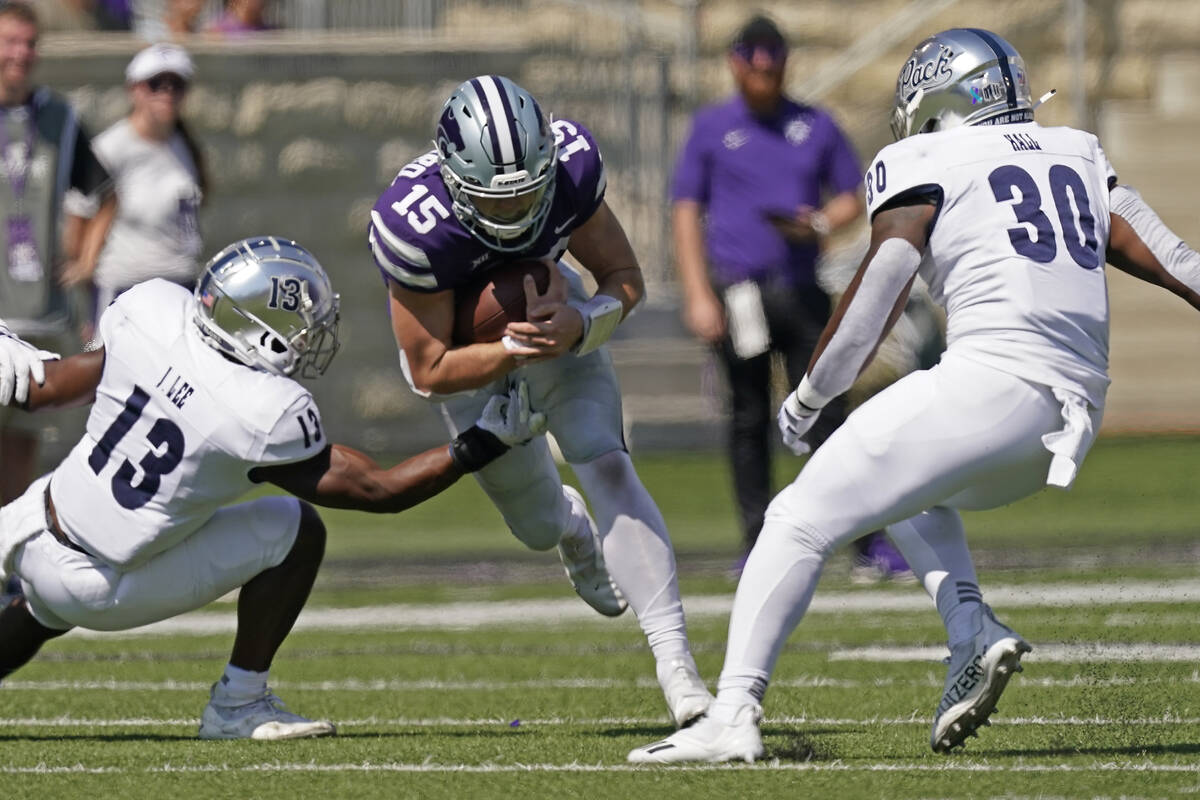 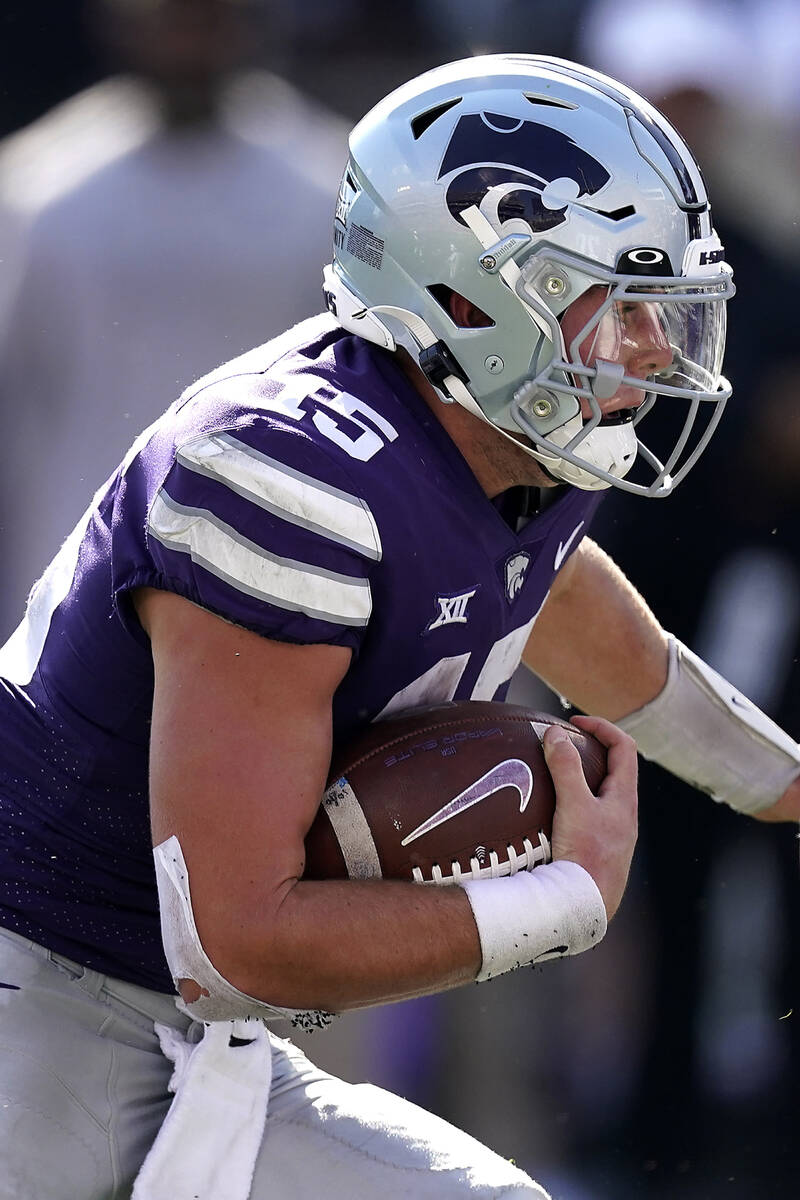 Kansas State quarterback Will Howard runs for a touchdown during the second half of an NCAA college football game against Nevada on Saturday, Sept. 18, 2021, in Manhattan, Kan. (AP Photo/Charlie Riedel) 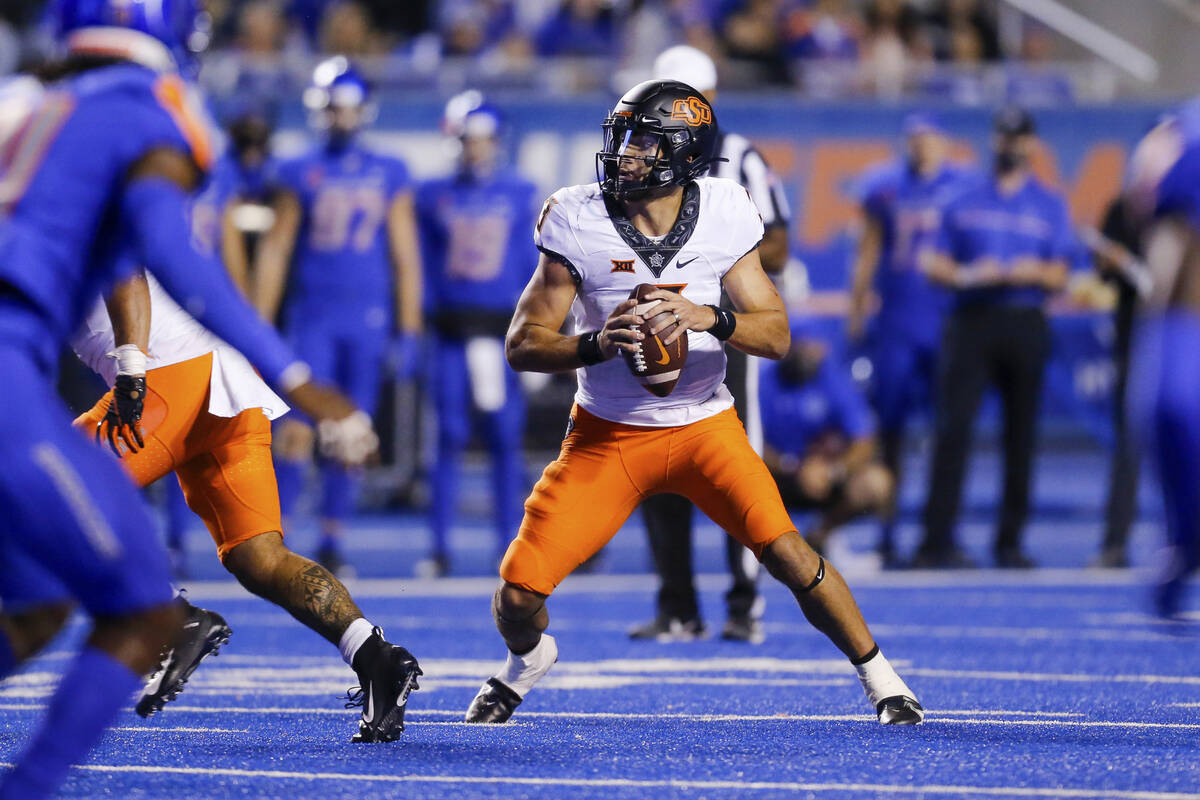 Oklahoma State quarterback Spencer Sanders drop back during the second half of the team's NCAA college football game against Boise State on Saturday, Sept. 18, 2021, in Boise, Idaho. (AP Photo/Steve Conner)

Oklahoma State hosts Kansas State in a Big 12 opener that seems destined to be low scoring.

The consensus total at Las Vegas sportsbooks is 46½. Kansas State allows 1.9 yards per carry, which ranks ninth in the nation, and Oklahoma State gives up 2.6 ypc, good for 17th.

Cowboys quarterback Spencer Sanders completed 6 of 13 passes for 82 yards in a 21-20 win at Boise State last week. The Wildcats lost QB Skylar Thompson to injury and are rocking with Will Howard, mediocre at best as a passer.

The biggest difference? Kansas State is tied for third in offensive success rate, and Oklahoma State ranks 112th. In a game in which field position could matter tremendously, the Wildcats are the better bet to consistently move the chains.

Sanders and the Cowboys might have a slight edge in the passing game. I would make this line pick’em on a neutral field.

Missouri (-1½) over BOSTON COLLEGE: The Eagles’ season changed when quarterback Phil Jurkovec got injured. Backup QB Dennis Grosel completed 7 of 15 passes for 79 yards last week against a Temple defense that ranks 89th in SP+. Boston College wide receiver Zay Flowers is great, but he needs someone to throw him the ball. I don’t trust either defense. The Eagles gave up 28 second-half points to Massachusetts, and Missouri hasn’t been able to stop anyone. But coach Eli Drinkwitz, QB Connor Bazelak and running back Tyler Badie have formed a nice trio for Missouri.

Texas-San Antonio (+3) over MEMPHIS: The Roadrunners have covered in five consecutive games going back to last season and are 7-2 straight up in their last nine. Memphis was fortunate to beat Mississippi State despite getting outgained by 1 yard per play and allowing the Bulldogs to run 30 additional offensive snaps. UTSA running back Sincere McCormick (2,775 yards of total offense, 20 touchdowns last two seasons) is due for a big game. The Roadrunners, who won at Illinois, are tied for 29th in defensive EPA (Expected Points Added) per play; Memphis is No. 102.

Alabama-Birmingham (+3½) over TULANE: Bill Clark is 8-3 against the spread and 7-4 straight up as a road underdog against Group of Five teams at UAB. Clark is 1-6 ATS against Power Five teams and 37-19-1 against everyone else. Don’t let the fact that Tulane scared Oklahoma and Georgia embarrassed UAB to skew your projections. The Blazers gave up a combined six points and 2.7 yards per play to Jacksonville State and North Texas. UAB might have found something against the Mean Green in QB Dylan Hopkins, who is 10 for 12 for 261 yards, four TDs and no interceptions.

Toledo (-5) over BALL STATE: After pushing Notre Dame to the brink, Toledo laid an egg at Colorado State, but the Rockets didn’t allow a defensive touchdown. Ball State’s offense ranks 125th in EPA per pass. By any metric, Ball State’s defense has gotten obliterated; Toledo’s defense is 19th in EPA per play and 34th in success rate allowed. The SP+ projections favor Toledo by 12.3 on a neutral field.