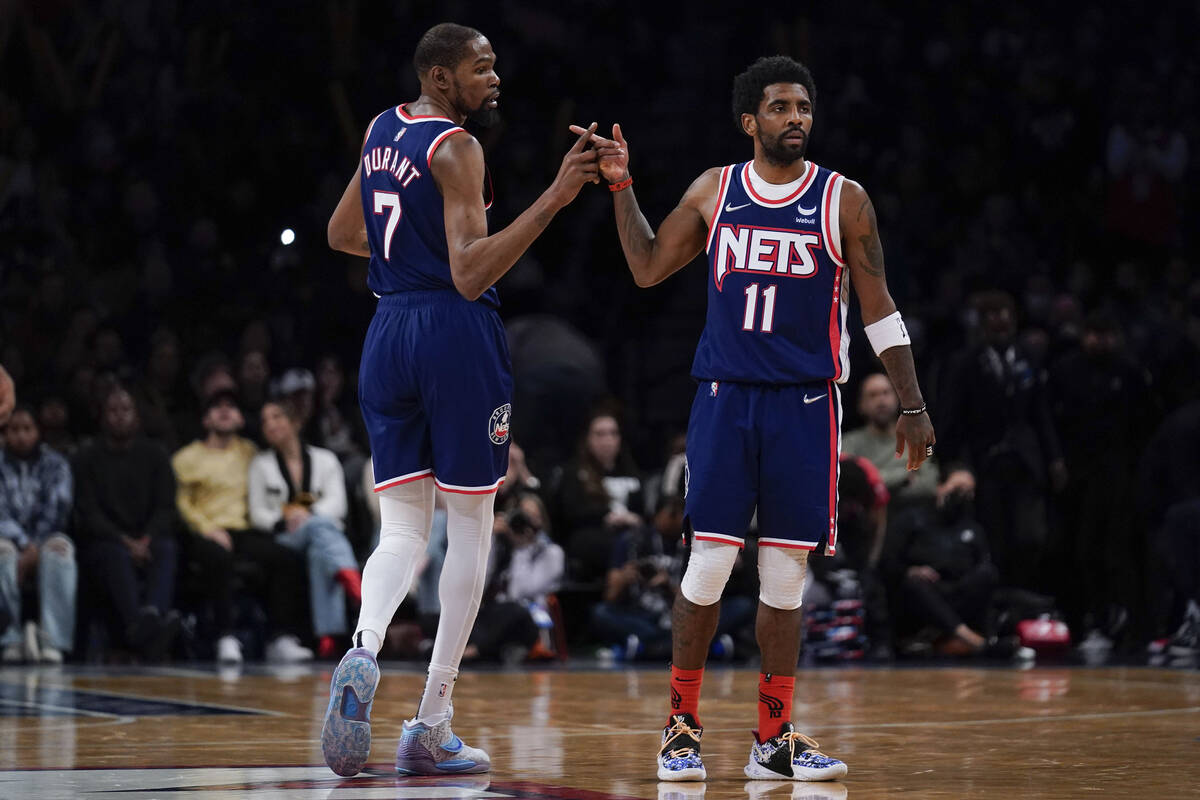 Brooklyn Nets' Kyrie Irving, right, and Kevin Durant celebrate after a basket during the second half of an NBA basketball game against the Indiana Pacers at the Barclays Center, Sunday, Apr. 10, 2022, in New York. (AP Photo/Seth Wenig) 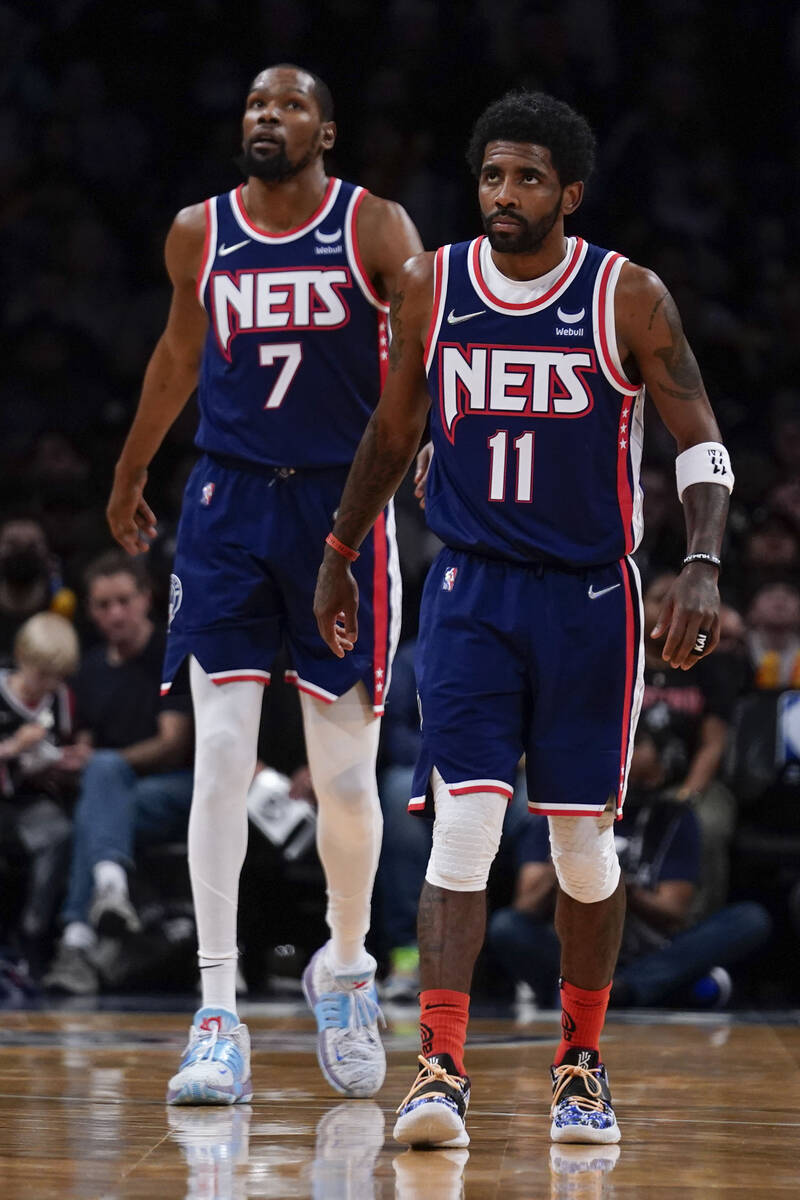 Brooklyn Nets' Kyrie Irving, right, and Kevin Durant during the second half of an NBA basketball game against the Indiana Pacers at the Barclays Center, Sunday, Apr. 10, 2022, in New York. The Nets defeated the Pacers 134-126. (AP Photo/Seth Wenig)

Phoenix and Miami are reportedly Durant’s preferred destinations, while bettors loaded up on the Lakers with the apparent expectation that Los Angeles will acquire disgruntled Nets star Kyrie Irving from Brooklyn.

The Suns are the +650 second choice at the Westgate SuperBook to win the title next season behind the Boston Celtics, who became the 6-1 favorites after acquiring Malcolm Brogdon and Danilo Gallinari.

“The Celtics are the favorites because they’ve made some tangible moves in picking up Brogdon and adding Gallinari and not really losing much,” Westgate NBA oddsmaker Jeff Sherman said. “The adjustments we made on the Suns and Heat are based on speculation. We had Phoenix at 12-1. But we can’t leave them at 12-1 with the speculation because we’d be flooded with support.

“If they got Durant and still had the core of the Suns with Chris Paul and Devin Booker, there would be another large adjustment down. We would probably have Phoenix about 3-1.”

“People always think the Lakers will end up with everybody,” Caesars senior trading manager Eric Fenstermaker said. “I kept their odds up after the $10,000 bet because they don’t have anything to package, at least on the surface level. They have no future picks in the short term, and I don’t think many teams would want (Russell) Westbrook unless they’re tanking. The Nets may take him for Kyrie (Irving), but definitely not for Durant.

“But we kept getting $500 here and $1,000 there at 22-1, and they were really piling up the liability, so I dropped their odds below market to put a finger in the dam of Lakers bets for now.”

“Ultimately, I think Durant will end up with Phoenix and Kyrie will end up with the Lakers,” Sherman said. “If you look at the patterns the last few years, stars seem to force their way to teams.”

Sherman expects the Lakers to offer a trade package to the Nets that includes a swap of Westbrook for Irving.

“If they want to move on from Westbrook, they have to do it and give in to the other demands of the Nets,” he said. “There’s a larger subtraction of Westbrook than the addition of Kyrie if that ends up going through.

“A lot of people out there think the Lakers minus Westbrook with Kyrie and (Anthony) Davis and LeBron (James) are probably about a 10-1 shot, not a 20-1 shot.”

The Golden State Warriors inched up from the 6-1 favorites to the 7-1 third choice after losing a few complementary pieces in Gary Payton II, Otto Porter Jr. and Nemanja Bjelica.

Brooklyn’s odds dropped from 20-1 to 8-1 when Irving opted into his contract for next season. But they soared to 50-1 after Durant’s demand.

The Atlanta Hawks dropped from 60-1 to 40-1 after they acquired Dejounte Murray from the San Antonio Spurs.