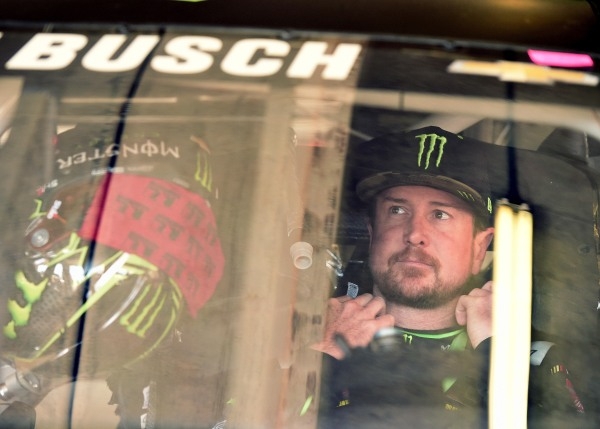 The major theme for today’s Sprint Cup race at Atlanta Motor Speedway was whether Joe Gibbs Racing and Team Penske would have as big of an edge as they did last season on the two tracks where NASCAR’s new low-downforce package was introduced. After Saturday’s final practice, it appears Chevrolet has closed the gap considerably.

JGR still had a major presence during the session with three of the top six speeds, led by last week’s winner, Denny Hamlin. But the most impressive looked to be three-time Atlanta winner Kurt Busch and four-time winner Jimmie Johnson based on 10-consecutive average lap speeds, in which Chevrolet posted the top six times.

Perhaps the biggest surprise between Friday and Saturday’s practices was that Penske Ford drivers Brad Keselowski and Joey Logano looked ordinary. Both were almost on par with JGR last season with the new package at Kentucky Speedway and Darlington Raceway — Logano finished second and fourth, and Keselowski was sixth and second. But in the final 80-minute practice Saturday, Logano was 32nd and Keselowski 17th.

What all that means at Las Vegas sports books is that some major adjusting will occur in odds to win and driver matchups. Logano was listed as the early 5-1 co-favorite, but his poor practices downgrade him severely. Busch was 15-1, but he has been upgraded to one of the favorites.

Although Atlanta and Las Vegas Motor Speedway have different types of 1.5-mile layouts, it’s likely that the top drivers today will be just as good next week in Las Vegas. Last season, seven of the top 10 at Atlanta finished in the top 10 the following week at LVMS. Things might be even clearer this year because of the new package involved.

Where the Atlanta details will pay off are with the dozens of props posted for the race. The biggest differential with the new package in regards to props is the tough number bookmakers are going to make for cautions.

Last year at Atlanta, there were 11 cautions, then a whopping 18 at Darlington. Las Vegas had only six cautions with the old package. Drivers now have to feather the gas more than ever around turns on 1.5-mile tracks, or else they will slide and spin out. It may be awhile until drivers are fully comfortable with the package, but they all say they love it.

Kurt and Kyle Busch have a great shot at winning at Atlanta and next week at LVMS. Kurt’s three Atlanta wins came with two manufacturers (Ford, Dodge), and he will try to get his first there in a Chevrolet. Kyle has two Atlanta wins, including the first Sprint Cup win for Toyota, in 2008. Kyle won the pole but will start from the rear after failing a post-qualifying inspection. Still, he should move up quickly. Last season, Kyle won at Kentucky and was seventh at Darlington with the new package.

The last driver at 25-1 or higher to win at Atlanta was Jerry Nadeau in the No. 25 Hendrick Motorsports Chevrolet in 2000 at 50-1. It traditionally has been a favorite’s track. But between the new package and final practice, there would be nothing wrong with betting on Jamie McMurray (60-1), Austin Dillon (60-1) or Ryan Newman (100-1). All three were in the top five of having the best 10-consecutive average speeds, which is always a great sign of who might be fastest on long runs during the race.

— Micah Roberts, a former Las Vegas sports book director, has been setting NASCAR odds since 1994. Follow him on Twitter @MicahRoberts7