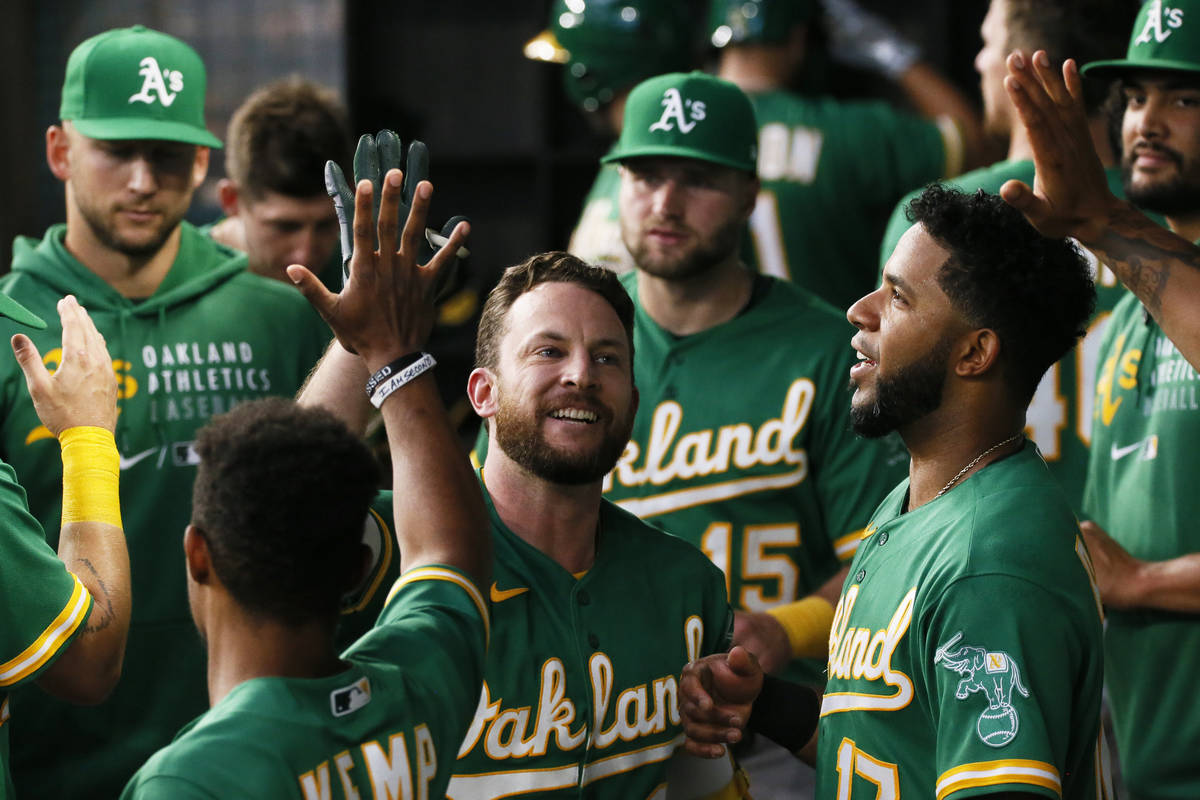 Oakland Athletics' Jed Lowrie is greeted in the dugout after hitting a solo home run against the Texas Rangers during the second inning of a baseball game in Arlington, Texas, Sunday, July 11, 2021. (AP Photo/Ray Carlin) 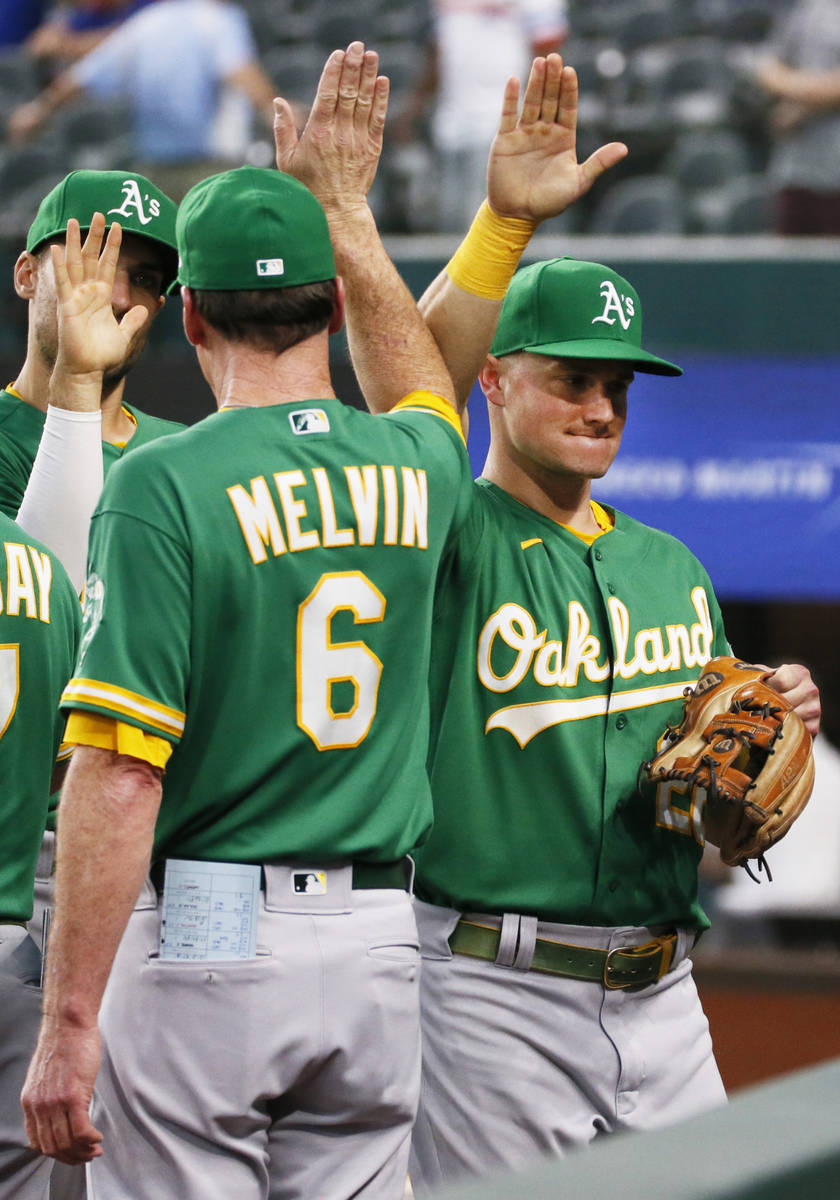 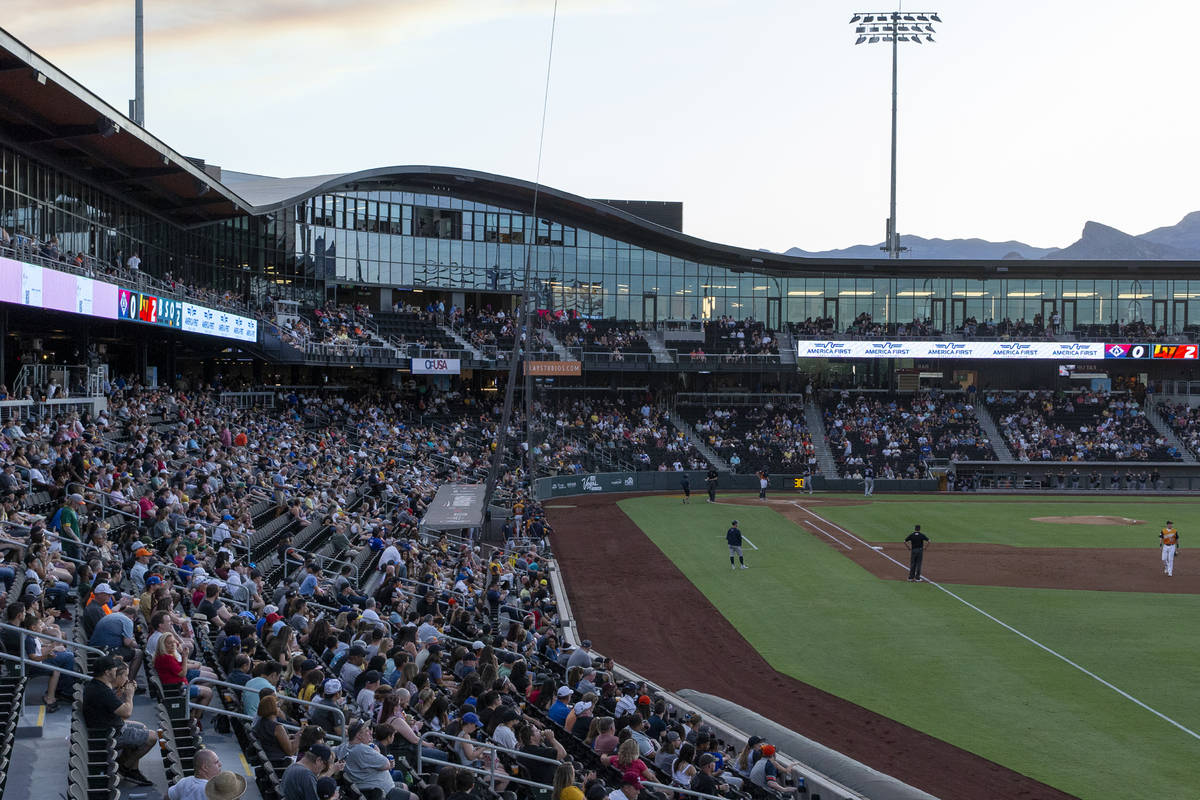 If the Oakland A’s strike out on their pitch for a new ballpark in the Bay Area, Las Vegas is the clear betting favorite to be their next home.

Major League Baseball commissioner Rob Manfred said Tuesday that “Las Vegas is a viable alternative for a major league club,” and oddsmakers put the city atop the list of options for the A’s if they relocate.

MyBookie, an offshore sportsbook, lists Las Vegas as the -200 favorite to be Oakland’s next home, followed by Nashville (+450), Montreal (5-1) and San Jose (6-1). Offshore books operate illegally in the U.S.

“Las Vegas’ willingness to build a new stadium, with the availability of a state-of-the-art Las Vegas Ballpark to play out of during the build, puts Vegas at the forefront of new A’s locations,” MyBookie oddsmaker David Strauss said.

Wagering on the A’s next home isn’t available at U.S. sportsbooks, and no Nevada book has requested approval from the state Gaming Control Board to take bets on that proposition.

DraftKings posted odds for entertainment purposes only May 11, making Las Vegas the +200 favorite to be Oakland’s next home when MLB instructed the A’s to begin exploring other markets while they continue to pursue a waterfront ballpark in Oakland.

DraftKings sportsbook director Johnny Avello said Wednesday he doesn’t expect the A’s to move. But if they do, he said Las Vegas is the favorite to be their landing spot.

“They’re not going anywhere. They’re staying in Oakland. That’s my opinion. But Las Vegas has to be one of the top locations for a team to go to,” Avello said. “The city has grown to 2½ to three million people, and other major sports teams seem to be doing well here. The Raiders haven’t had a game with fans yet, but they anticipate full capacity in every game this season. The NBA has been explored.

“It’s probably one of the better cities out there that could support a team. If it’s not the A’s, it could be somebody else. I think the heat is a problem. It’s got to be an indoor stadium.”

“Portland is a city that’s been talked about for a while, but Vegas has passed them,” Avello said. “Nashville is a growing town that’s also a viable spot. Montreal is kind of a long shot. They had a baseball team once (Expos, 1969 to 2004), but it didn’t do that well there.”

The Oakland City Council will vote next week on whether to give the A’s proposal nonbinding approval. But A’s president Dave Kaval told the Review-Journal on Tuesday that “there’s still a very big gap, over a half-a-billion-dollar gap right now that we’re trying to work on.”

Besides Las Vegas, Manfred said there are other viable alternatives that MLB hasn’t permitted the A’s to explore.

“So, thinking about this as a bluff is a mistake,” he said. “This is the decision point for Oakland as to whether they want to have Major League Baseball going forward.”

Goldsheet.com handicapper Bruce Marshall said there’s a chance the A’s move to Las Vegas, but he thinks it’s more than likely they will stay in Oakland.

“It’s possible now because it’s going to take the politicians there to help make something happen, and they’ve been very reluctant to commit any public money,” Marshall said. “What works in the A’s favor to stay is Oakland has lost the Warriors and lost the Raiders the last couple of years. If they lose their last team there, I think the blowback politically for all these guys will knock them out of office.

”That’s why I think they’ll get it done.”