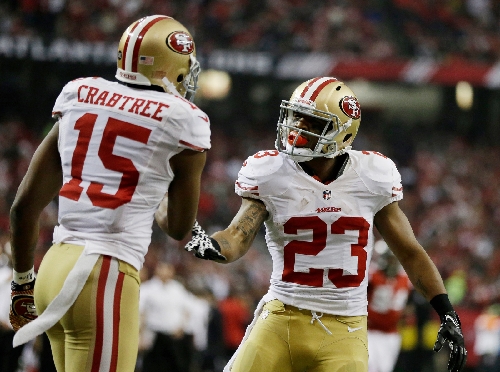 Play Q & A with handicapper Kelly Stewart, who answers selected questions from Las Vegas Review-Journal readers. Email her at Askkelly@reviewjournal.com.

A: I was hoping to get San Francisco at minus-3, but 3½ is the best line available. The Ravens are obviously a hot team after beating Denver’s Peyton Manning and New England’s Tom Brady in back-to-back weeks on the road. But Manning and Brady are stationary quarterbacks, and the 49ers’ Colin Kaepernick is a running threat. Kaepernick will make the difference.

But it’s not just Kaepernick. Running back Frank Gore gets tough yards between the tackles, Vernon Davis is a dangerous tight end, and Michael Crabtree is another weapon.

The San Francisco defense is fast and will frustrate Ravens quarterback Joe Flacco. I’m calling for the 49ers to win, 27-17.

Q: What are your favorite proposition bets this weekend? – Cindy, Las Vegas

A: There are always so many good ones, and the book of props almost looks like the Bible. I won’t be betting the length of time it takes Alicia Keys to sing the national anthem. But, believe it or not, I do like the coin flip (heads minus-102). I’m going for 5-0 on that prop.

I’m playing the alternative point spread on the 49ers at minus-7½ (plus-170), just to make the game more interesting. I also like Kaepernick at 10-1 odds to score the first touchdown. The Ravens don’t have much experience this season with stopping mobile quarterbacks, so I could see Kaepernick taking one in on his own if the opportunity is there.

Another prop I’m considering is Crabtree over 82½ receiving yards. He averages 69.1 yards per game, but he is Kaepernick’s favorite receiver, and I expect Crabtree to be targeted on several passes. I have a feeling he will put up big numbers.

Q: Who’s going to Disneyland? Or, should I say who will win Most Valuable Player? – Rob, Henderson

A: I’m going with the favorite on this one, Kaepernick at 8-5 odds. There is a lot of pressure in a big game like this, and no one can be certain how he will react to all the hype. But he led the 49ers back from a 17-0 deficit to win the NFC championship, and he shows no signs of nervousness.

It’s hard to imagine the Baltimore defense being able to contain him. If San Francisco wins, as I expect, Kaepernick most likely will win MVP. The statistics are in his favor, as 25 quarterbacks have won the award in previous Super Bowls.

MOST READ
1
Arrest report: Woman was driving 78 mph before fatal crash on Strip