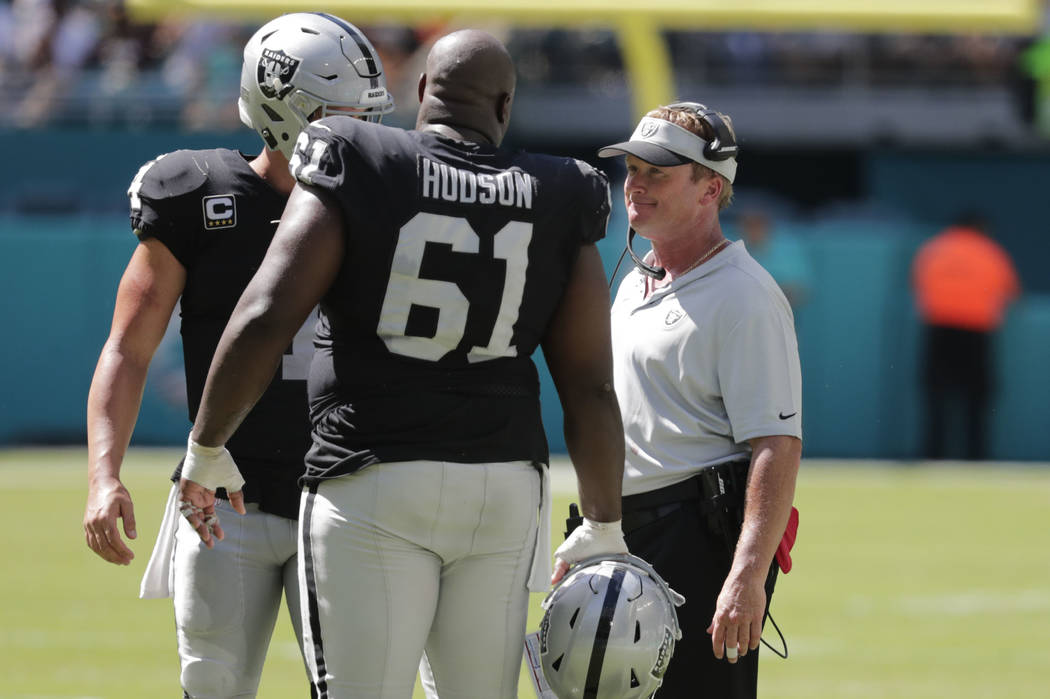 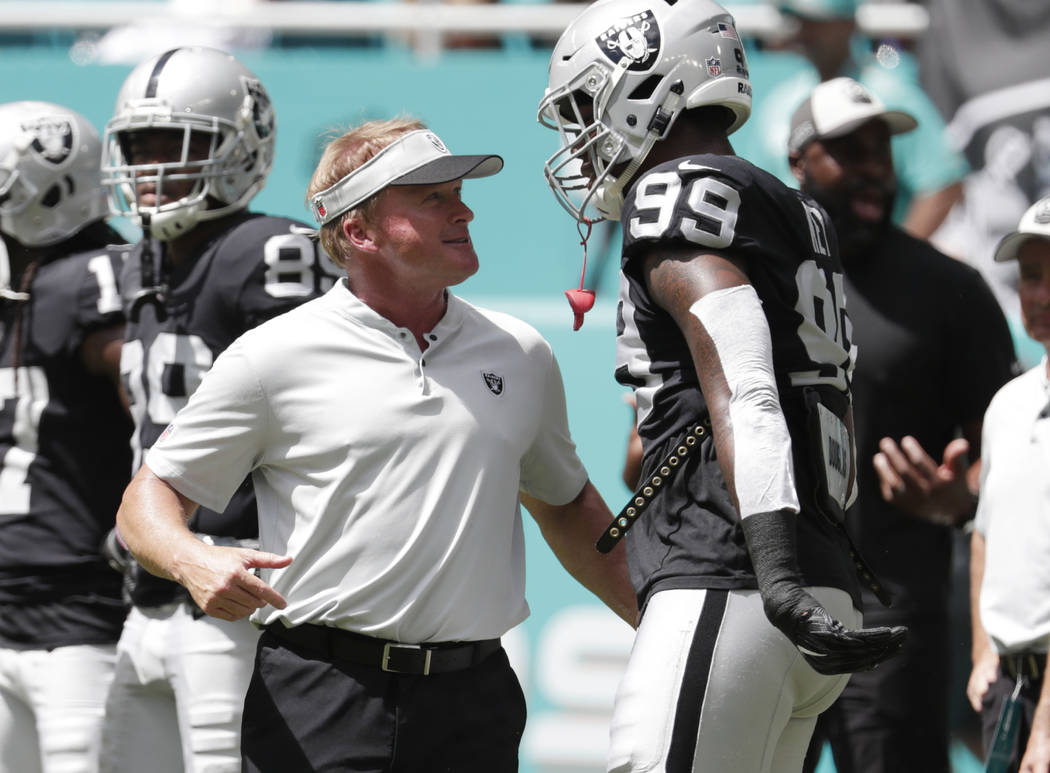 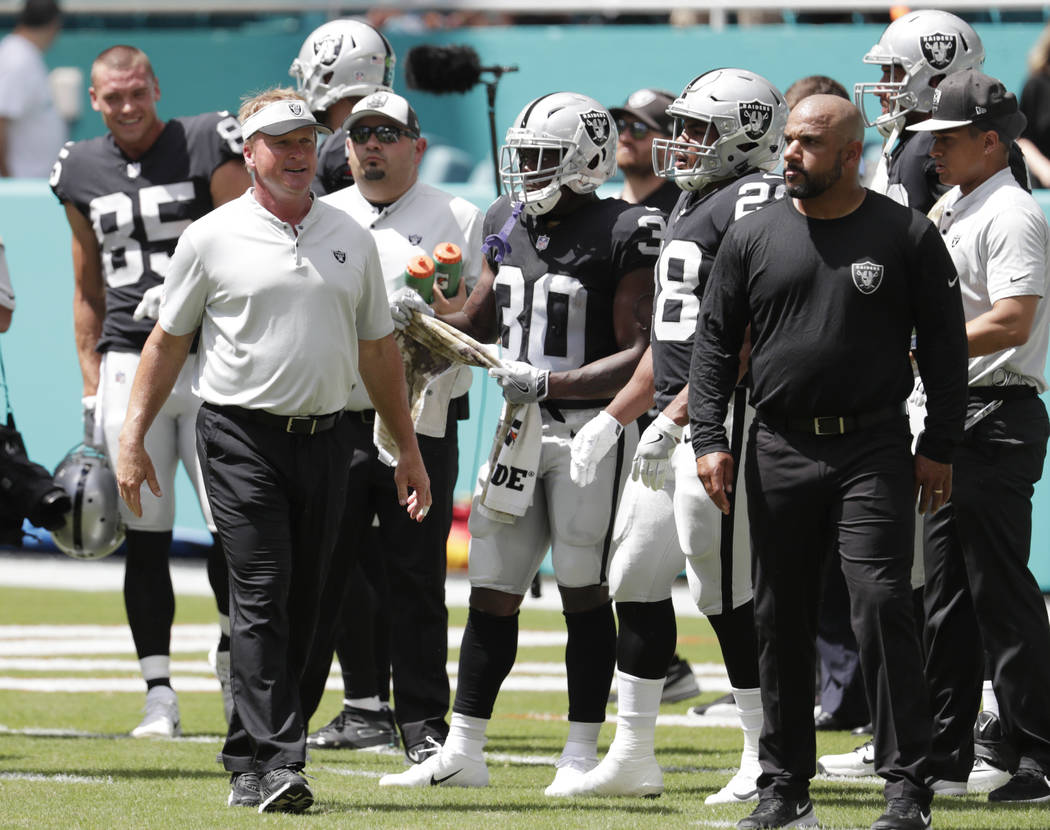 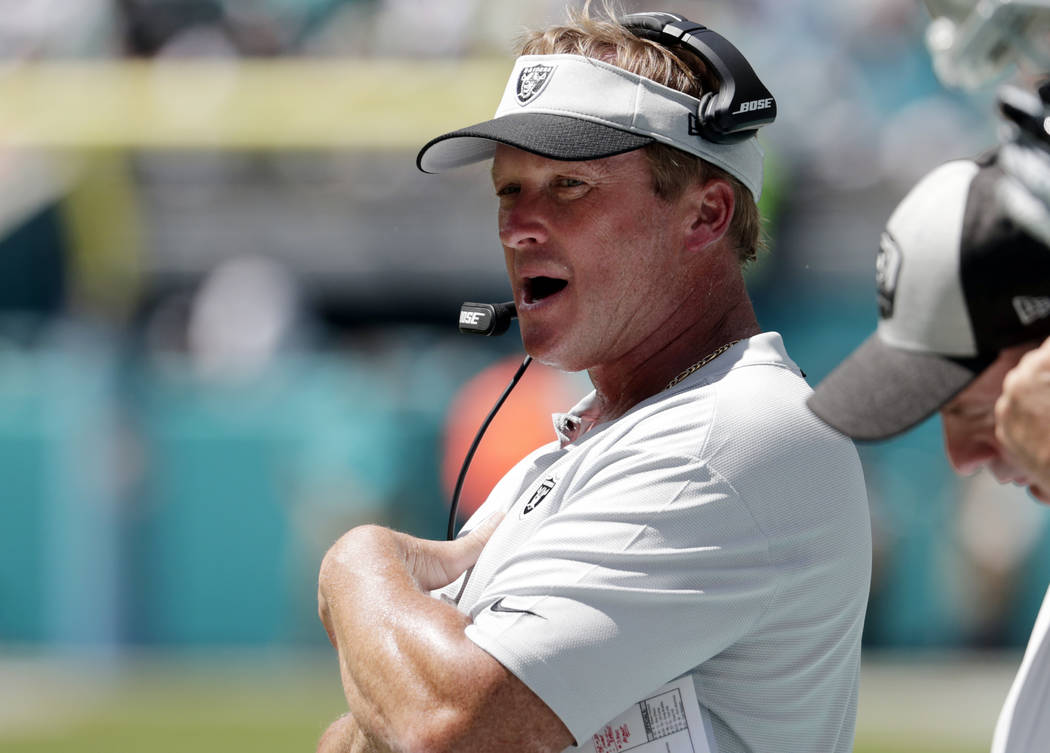 FILE - In this Sunday, Sept. 23, 2018, file photo, Oakland Raiders head coach Jon Gruden works the sideline during the first half of an NFL football game against the Miami Dolphins in Miami Gardens, Fla. After three straight losses to open the season after trading away his best player, he is now preaching patience in response to the criticism that comes with a rough start on the field for a coach with a 10-year contract worth a reported $100 million. (AP Photo/Lynne Sladky, File)

Now that the Cleveland Browns have ended their 19-game winless streak, the Houston Texans and Oakland Raiders are on the clock.

The Texans have the NFL’s longest current losing streak at nine games, and the Raiders are next with a seven-game slide, including three to start this season.

Oakland coach Jon Gruden, aka Chucky from the “Child’s Play” horror franchise, hasn’t won a game since the movie came out in 1988.

Actually, it only seems that long. In reality, he hasn’t won a game since 2008, though incredibly Chucky 6 and 7 — “Curse of Chucky” and “Cult of Chucky” — were released straight-to-video in that time. We discovered those disturbing facts through exhaustive research Friday, when we Googled “Child’s Play.”

The point is that the Raiders appear poised to break the Curse of Chucky — or Curse of Khalil Mack or whatever you want to call their losing streak — against the Browns on Sunday at the Oakland Coliseum.

Oakland is a 2½-point favorite over Cleveland (1-1-1), which is 3-0 against the spread after No. 1 overall draft pick Baker Mayfield came off the bench to lead the Browns to a 21-17 comeback win over the Jets.

The last No. 1 pick to win and cover his first start was David Carr, older brother of Raiders QB Derek Carr, who is second in the league in completion percentage (76.6).

This season hasn’t been a giant black hole for Oakland. It has led at halftime in all three games, including 13-10 over the unbeaten Rams (4-0) and 12-0 over the undefeated Dolphins (3-0). The Raiders led the Broncos 19-17 in the final seconds before Denver overcame 750-1 odds (at least at the FanDuel sports book in New Jersey) in a 20-19 triumph.

We expect Oakland to cover the short spread at home and grind out Gruden’s first win in 10 years.

Texans (+1) over COLTS: Houston also is in position to end its losing streak in a matchup of arguably the NFL’s biggest underachiever against the biggest overachiever (Indianapolis). A trendy Super Bowl pick in the preseason, the Texans have yet to recapture the magic they had last season behind quarterback Deshaun Watson. But all three of their games have been decided by one possession, the offense is ranked in the top 10 and J.J. Watt is rounding into form with three sacks against the Giants.

PATRIOTS (-6½) over Dolphins: New England’s stock is low after its ugly loss to the Lions. The Patriots were 9½-point favorites over Miami before that debacle, but the line has dropped below the key number of 7 at several spots. New England hasn’t lost three straight games since 2002. The Dolphins, a popular public underdog this week, is 0-6 ATS in their last six trips to New England, and the home team has won and covered 10 of the past 11 meetings.

Bengals (+4) over FALCONS: Cincinnati QB Andy Dalton should pick apart an Atlanta defense that will be missing at least three starters and looked, well, defenseless in Sunday’s 43-37 overtime loss to the Saints. The Bengals stayed within striking distance in a 31-21 loss to the Panthers despite four interceptions by Dalton, who threw for 352 yards. The Falcons have lost 13 of their past 20 games against the AFC.

JAGUARS (-7½) over Jets: Jacksonville is 7-1 after losses under coach Doug Marrone and should take out its frustrations from a 9-6 defeat to the Titans on New York rookie quarterback Sam Darnold. The Jaguars, who opened as 9-point favorites, have the NFL’s top scoring defense (14.7 ppg) and No. 3 pass defense. After an impressive debut against Detroit, Darnold has thrown four interceptions and one TD in losses to the Dolphins and Browns in which the Jets averaged 14.5 ppg.

Last week: 2-3 against the spread.