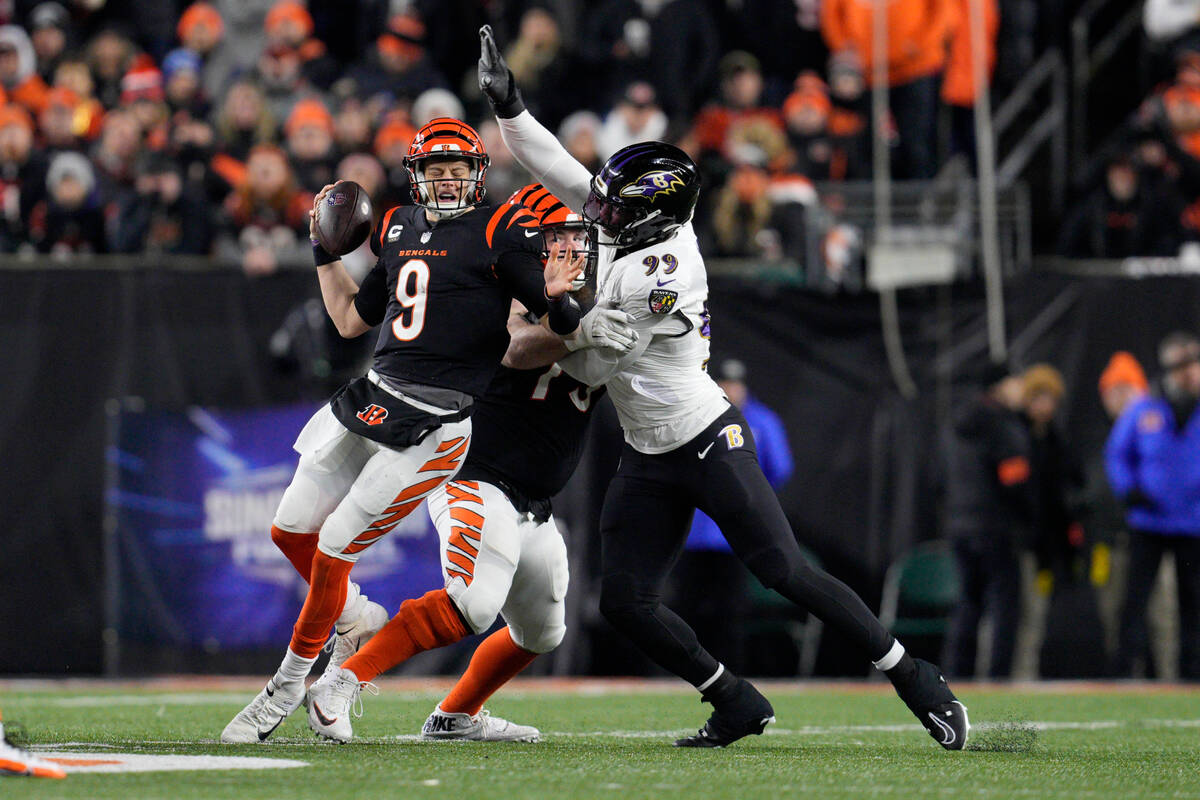 The Bengals bolstered their offensive line in the offseason by adding three starters in free agency to a unit that allowed seven sacks in their Super Bowl loss to the Rams.

But Cincinnati will be down three starting offensive linemen in Sunday’s divisional playoff game at Buffalo.

Sharp bettors are banking on the Bills to cover the spread against the injury-depleted Bengals.

The South Point sportsbook took sharp action on Buffalo -4 and -5, and Circa Sports and Station Casinos took sharp money on the Bills -4½ before the line settled at 5½.

“They have two backups at the tackle position and a backup at guard. That’s a lot in professional football to overcome,” Westgate SuperBook oddsmaker Ed Salmons said. “That’s the way the wiseguys bet the NFL all year. They always look to bet against teams with a decimated offensive line.”

“There’s a chance we go up to 6, but I think 6 is a take (on Cincinnati),” Caesars assistant director of trading Adam Pullen said. “I think the Bengals still have the respect of bettors even though everyone saw last week that they were pretty fortunate to win.”

Salmons and professional sports bettor Jeff Whitelaw like the Bills to cover.

“The linemen being out gives an edge to the Bills. It’s just too much,” Whitelaw said. “The Bengals shouldn’t be able to be very effective either running or passing, and I don’t think Joe Burrow will have a lot of time.”

The Westgate took sharp action over 49½ and under 50½ before it settled at 49.

BetMGM took large six-figure wagers on the Bills -4 and the Chiefs -8½ over the Jaguars in Saturday’s divisional round opener.

Station Casinos took sharp action on Jacksonville that caused the opening number to drop from 9½ to 8½. South Point took sharp money on Kansas City -8 and -8½, and the Chiefs are now -9 at the book.

Kansas City beat Jacksonville 27-17 at home in Week 10 and covered as a 9½-point favorite. The total is 53 after a sharp group bet over 52 at the Westgate.

Bettors are all over a Chiefs-Eagles teaser in which they can lower the lines on both teams by six to seven points.

“You think about Chiefs coach Andy Reid and his unbelievable 27-4 record coming off a bye,” Red Rock Resort sportsbook director Chuck Esposito said. “The Chiefs and Eagles are clearly the two teams that they’re teasing, and the Cowboys a bit, too, to get them over 10 points.”

Circa took sharp action on the Eagles -7 over the New York Giants, and the South Point took a little sharp play on Philadelphia -7½.

Caesars and Stations took sharp action on the Eagles and Giants, who lead the NFL with a 14-4 ATS record. A Caesars bettor wagered $220,000 on Philadelphia on Thursday night that momentarily pushed the line to 8 before sharp action on New York moved it back to 7½.

“That happens sometimes. You’ll have sharp bettors that you respect on opposite sides,” Pullen said. “It’s not like sharp bettors are always on the same side no matter what.”

“San Francisco is pretty much the class (of the NFC). They’ve been playing phenomenal,” he said. “Dallas is playing its third consecutive road game and really hasn’t shown anything lately. Beating up on a miserable Tampa team really doesn’t count.”