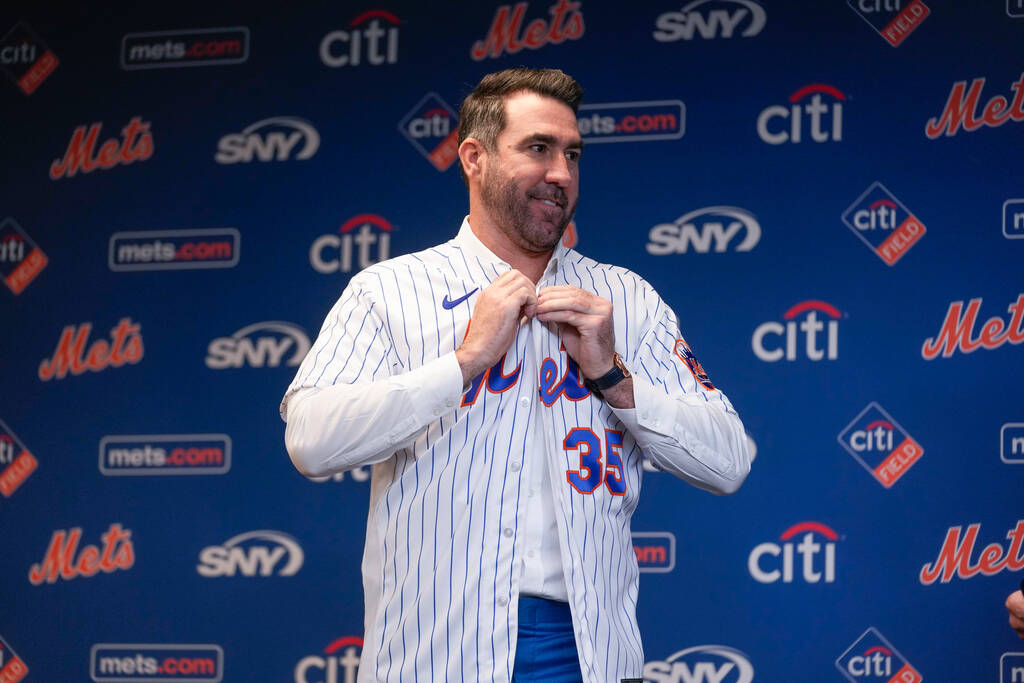 New York Mets pitcher Justin Verlander puts on his new jersey during a news conference at Citi Field, Tuesday, Dec. 20, 2022, in New York. The team introduced Verlander after they agreed to a $86.7 million, two-year contract. It's part of an offseason spending spree in which the Mets have committed $476.7 million on seven free agents. (AP Photo/Seth Wenig)

“They’ve made some high-profile signings. (Owner) Steve Cohen isn’t afraid to splash the money around.”

Since three-time Cy Young award winner Justin Verlander agreed to a two-year, $86.6 million contract with New York on Dec. 5, there has been more money bet on the Mets to win the World Series than all 15 American League teams combined.

The Mets, who have committed more than $800 million in free agency, lead in tickets and money wagered on World Series futures at Caesars, where they’re the +750 third favorite to win it all behind the defending world champion Astros (4-1) and Dodgers (6-1).

New York opened as the 10-1 fifth choice and dropped to +750 on Dec. 21, when it agreed to a 12-year, $315 million deal with Carlos Correa. The odds haven’t changed despite the deal being in limbo because of concerns over Correa’s medical reports.

“We already wrote the bets on them and there’s still no measurable impact on the field to push them back, so we’d keep them at +750 if Correa falls through,” Biggio said. “Then there’s the thought process for the causal bettor and even the sharp bettor that the Mets aren’t done. If it doesn’t work out with the Correa signing, I think they would still spend elsewhere.

“As a true fan, (Cohen will) do anything to improve his team.”

The Atlanta Braves and San Diego Padres are each 10-1, followed by the defending NL champion Philadelphia Phillies (13-1), Toronto Blue Jays (14-1) and Seattle Mariners (17-1).

With spring training starting in February, Houston and Los Angeles have the highest 2023 season win totals at Caesars at 97½ apiece, followed by the Mets at 96½.

On the flip side, four teams had 100 losses or more last season, with the Washington Nationals finishing 55-107, the Oakland Athletics going 60-102 and the Pittsburgh Pirates and Cincinnati Reds each finishing 62-100.

All four teams have win totals in the 60s, with the A’s at a league-low 61½, the Pirates and Nationals at 62½ and the Reds at 64½. The Kansas City Royals and Colorado Rockies are each at 69½.

The Westgate SuperBook has posted odds on the team to finish with the most wins in the regular season. The Astros, Mets, Dodgers and Yankees are 6-1 co-favorites, followed by the Braves and Padres at 8-1 and the Blue Jays at 10-1.