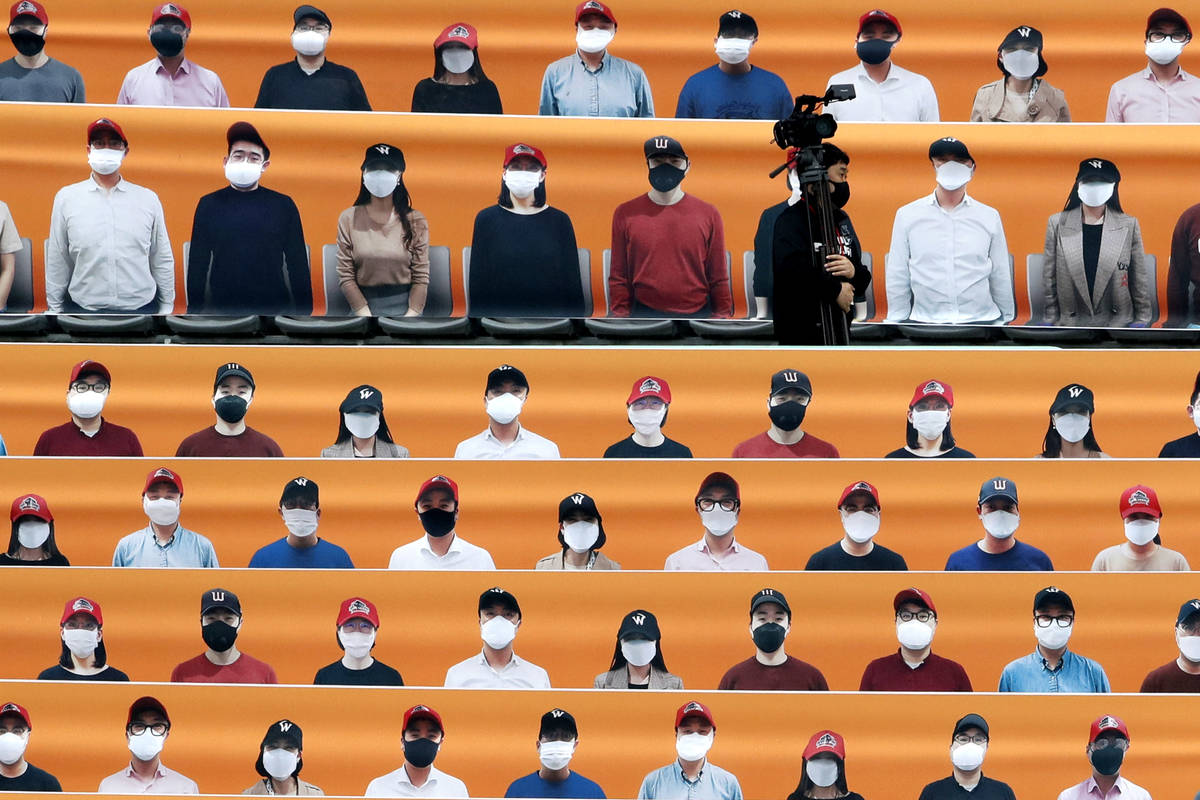 A TV cameraman walks through the spectators' seating which are covered with pictures of fans, before the start of a regular season baseball game between Hanwha Eagles and SK Wyverns in Incheon, South Korea, Tuesday, May 5, 2020. South Korea's professional baseball league start its new season on May 5, initially without fans, following a postponement over the coronavirus. (AP Photo/Lee Jin-man) 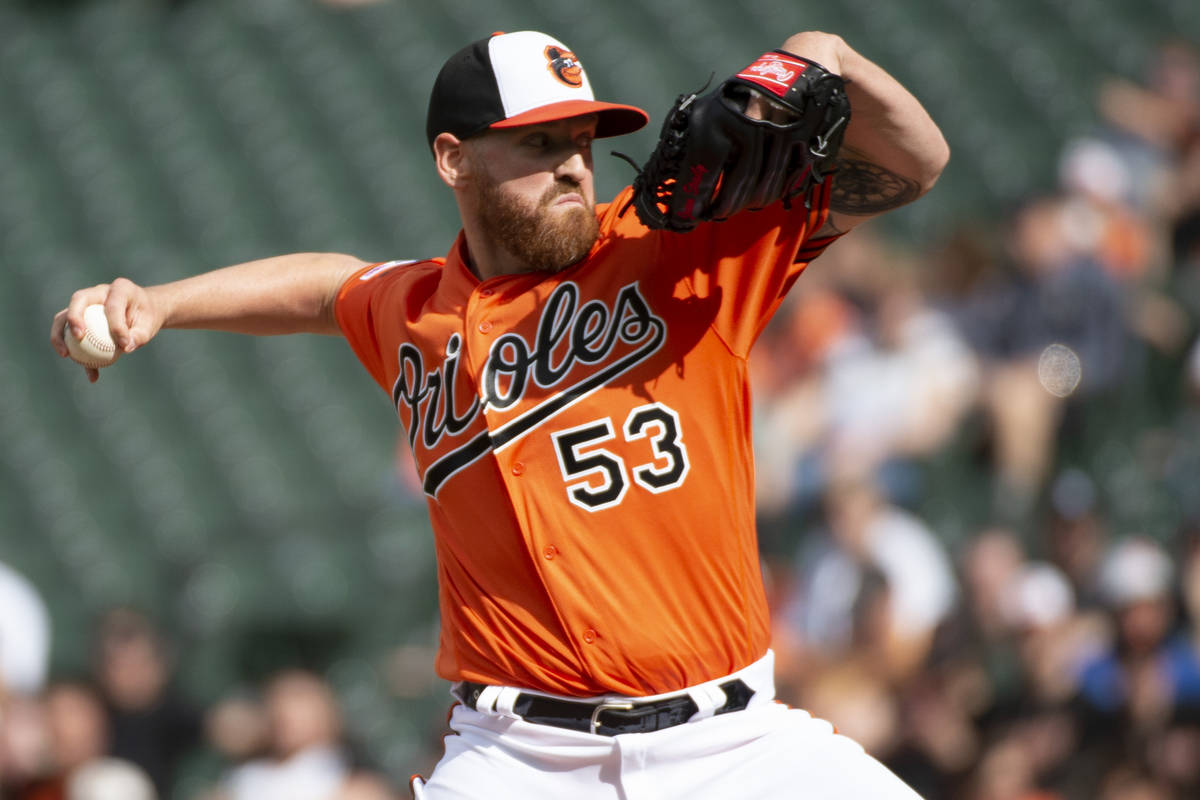 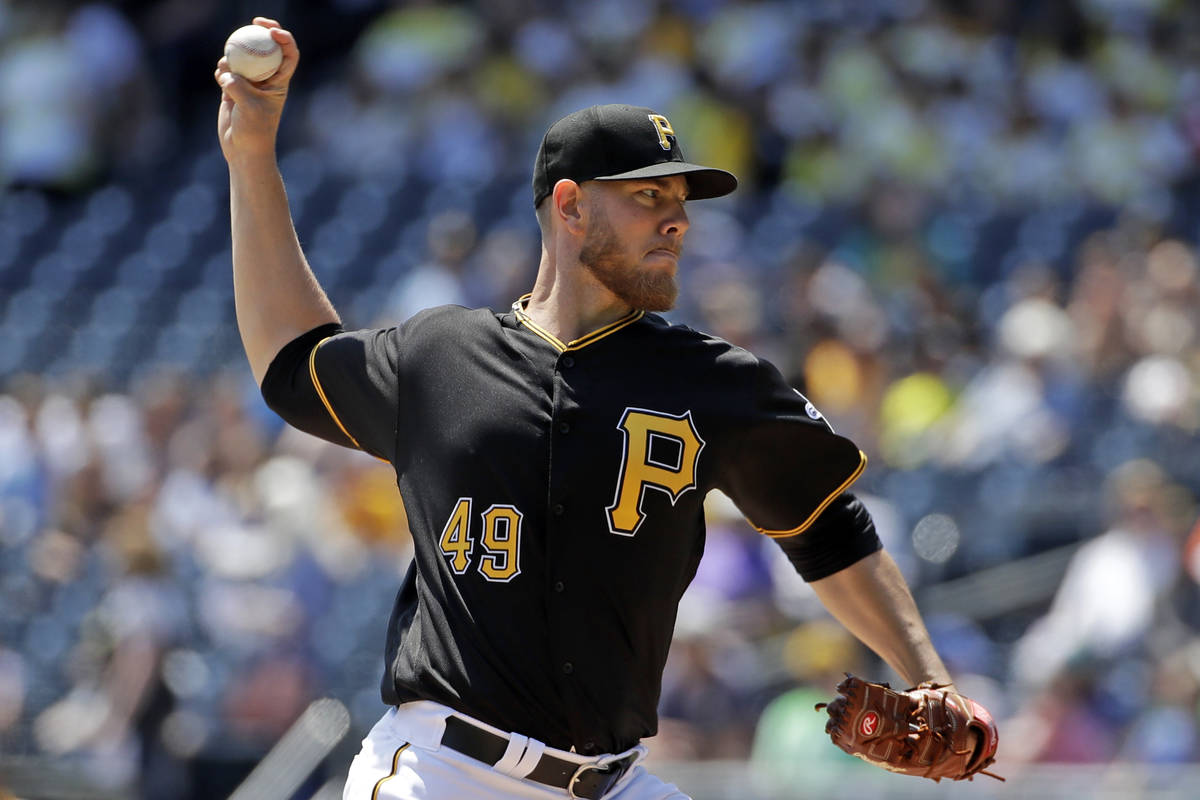 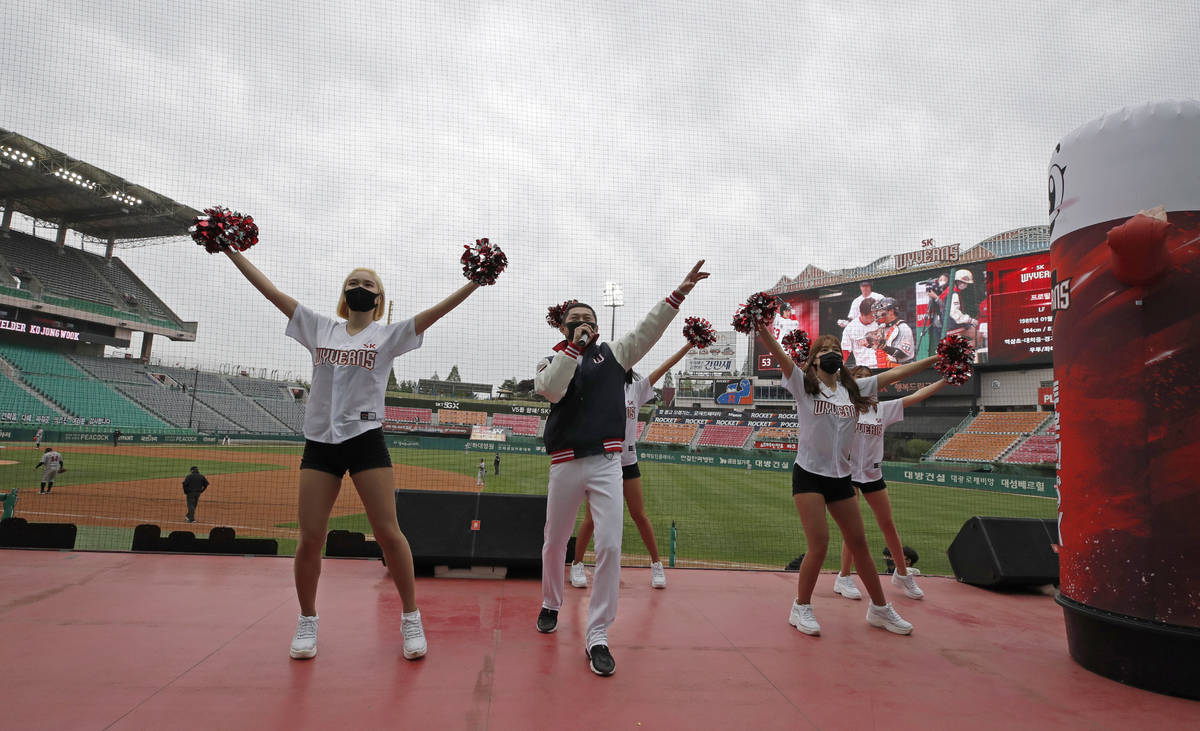 SK Wyverns' cheerleaders cheer for their team during a baseball game between Hanwha Eagles and SK Wyverns in Incheon, South Korea, Tuesday, May 5, 2020. With umpires fitted with masks and cheerleaders dancing beneath vast rows of empty seats, a new baseball season got underway in South Korea following a weeks-long delay because of the coronavirus pandemic.(AP Photo/Lee Jin-man) 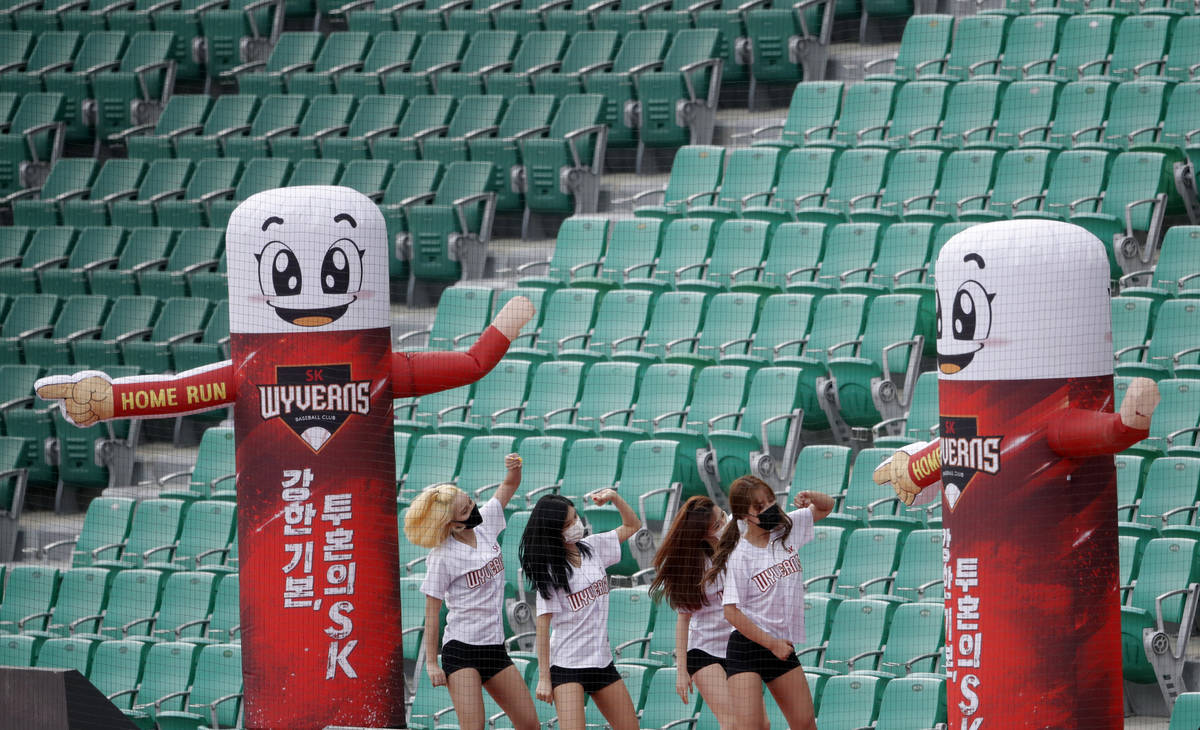 SK Wyverns' cheerleaders cheer for their team during a baseball game between Hanwha Eagles and SK Wyverns in Incheon, South Korea, Tuesday, May 5, 2020. With umpires fitted with masks and cheerleaders dancing beneath vast rows of empty seats, a new baseball season got underway in South Korea following a weeks-long delay because of the coronavirus pandemic. (AP Photo/Lee Jin-man) 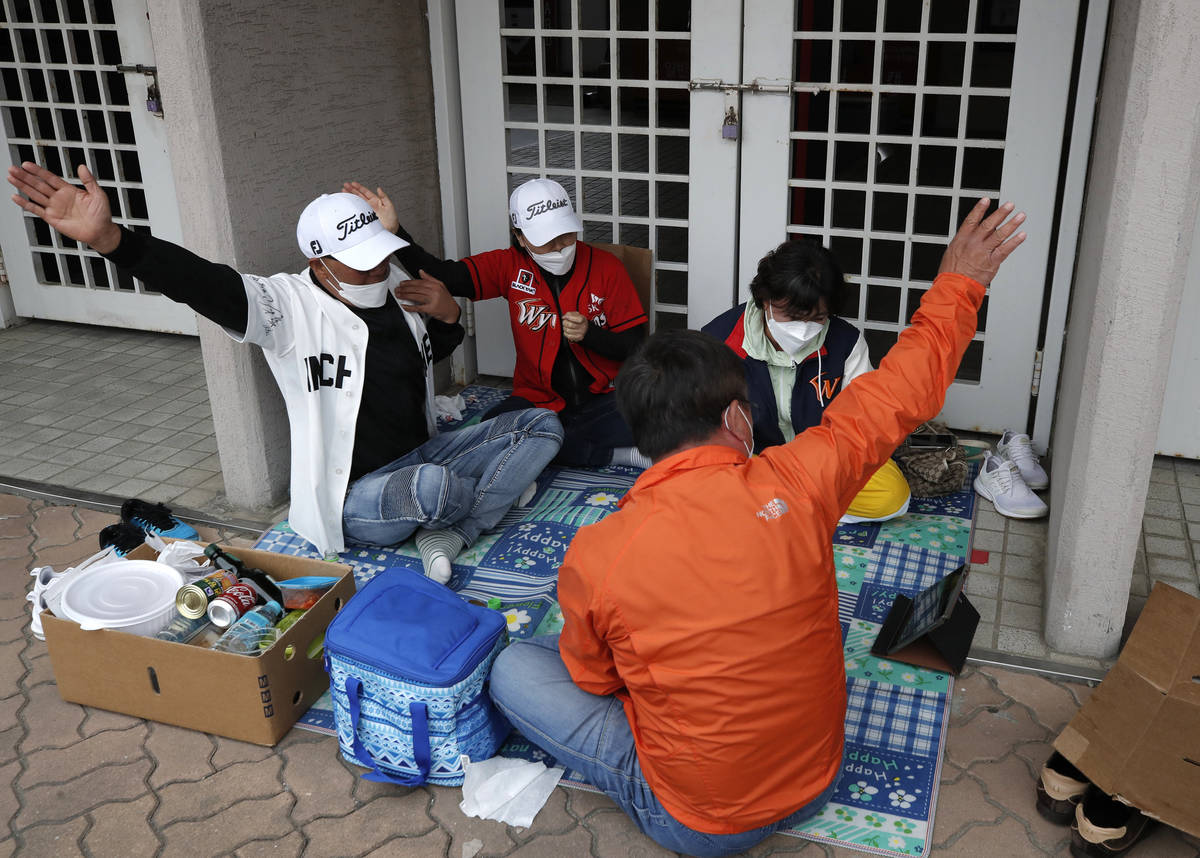 SK Wyverns baseball team fans wearing face masks watch the live baseball game outside the stadium during a baseball game between Hanwha Eagles and SK Wyverns in Incheon, South Korea, Tuesday, May 5, 2020. With umpires fitted with masks and cheerleaders dancing beneath vast rows of empty seats, a new baseball season got underway in South Korea following a weeks-long delay because of the coronavirus pandemic. (AP Photo/Lee Jin-man)

If you squint a little bit, life almost seems normal for baseball fans and bettors.

A pitcher you’ve heard of is on the mound, the game is on ESPN2, and betting lines are posted on your mobile sports app.

The Korean Baseball Organization is not Major League Baseball, but it is offering a reasonable facsimile of the game amid the sports shutdown caused by the coronavirus pandemic.

“It’s really just providing some sense of normalcy,” handicapper Matt Lindeman said. “It’s something to look at on the screen. It’s nice to have that.”

William Hill sportsbook director Nick Bogdanovich said the KBO was consistently No. 2 in tickets and handle behind Russian table tennis in its first week of action.

“Pingpong is still the king by a mile,” he said. “But South Korean baseball has shot by all others.”

The KBO is a 10-team league, and games are typically played in the early morning hours Pacific time.

The rules are basically identical to MLB, other than the universal use of a designated hitter. Teams are allowed three foreign-born players on their roster, often former major leaguers looking to rebuild their careers.

Notable U.S. players in the league this season include pitcher Dan Straily, who spent eight years in MLB, including last season with the Baltimore Orioles, and pitcher Nick Kingham, a Sierra Vista High product.

Lindeman said the former major leaguers are usually the best players on the team and that there is especially a drop-off in the quality of the pitchers from the international players to the Korean-born ones.

Like MLB, handicapping a baseball game begins with the starting pitchers. However, Las Vegas sportsbooks have chosen to simplify betting and not list the pitchers for KBO games. If there is a pitching change, the wager stands at the price the bettor locked in, Westgate sportsbook manager Randy Blum said.

Blum and Lindeman point out that though the pitchers aren’t listed, that information is readily available. Lindeman said he uses the websites mykbostats.com and kbofancystats.com as resources.

Lindeman said he has been “treading cautiously” through the start of the season. For MLB, he said he feels confident in predicting which way the lines will move and will often try to bet both sides of a game at the right prices to lock in a profit. For the KBO, he’s relying on basic handicapping to try to get a handle on the league.

The Lotte Giants have been the surprise of the league, rocketing out to a 6-1 start after being 20-1 to win the league at the start of the season. They’re now 6-1 at the Westgate.

The Kiwoom Heroes, the runners-up last season, are the 3-1 favorites to win the league after starting 6-2. The defending champion Doosan Bears (4-3) and NC Dinos (6-1, tied with Lotte for first) are next at +350.

Blum said the Westgate is moving much more quickly in reassessing teams than it would for MLB.

“If the Detroit Tigers started 5-0, we’d know they weren’t going to continue that way,” he said. “But we don’t know this league that well, so we’re being aggressive.”

Despite that, the Westgate is still dealing a 10-cent line on games (-155 on the favorite and +145 for the underdog, for example) as it would for MLB. Other books around town are using a 20-cent line or higher.

There is certainly interest in the league.

An attempt to log on to mykbostats.com shortly before games started at 2:30 a.m. PDT Wednesday produced this error message: “We’re sorry, too many people are accessing this website at the same time. We’re working on this problem. Please try again later.”