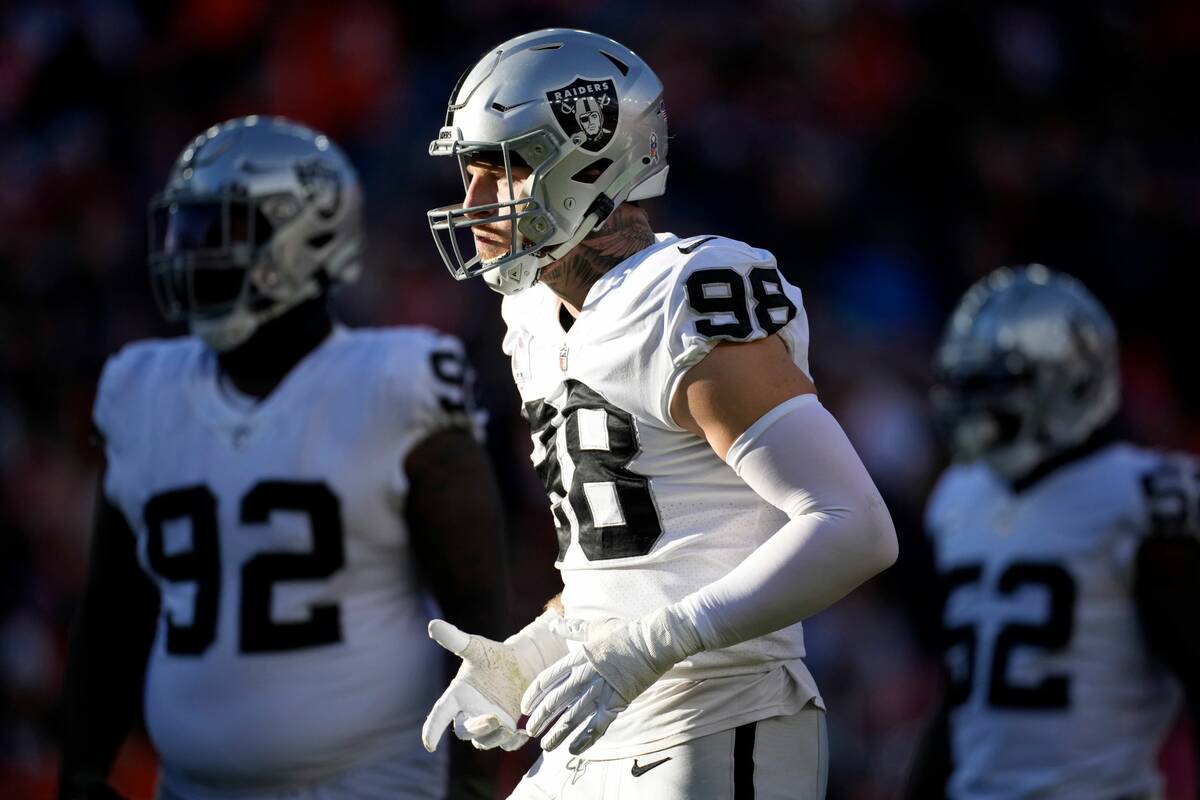 Analysis: First-year Raiders WR Davante Adams has come as advertised and is clearly a receiver that QB Derek Carr leans on. It’s not that side of the ball that’s a problem. The Raiders are dead last in the NFL in takeaways, forcing just six turnovers this season, and rank 27th in total defense, allowing 370.5 yards per game. However, something seemed to click in their 22-16 Week 11 win at Denver, where they gave up just 320 total yards while holding the Broncos to three third-down conversions on 12 attempts. This might be the start of the Raiders upholding their role in “Win City.”

By the numbers: Road underdogs of four points or less have been a profitable wager in recent years, going 169-124 against the spread (57.7 percent). There are some variables in that number, as I like to throw out the first and last week of a season for accuracy.

Analysis: Former Tom Brady disciple Jacoby Brissett will get what is assumed to be his last start for the Browns before Deshaun Watson takes the reins next week against the Houston Texans. The Bucs could easily be better than their record indicates, as six of their last eight games, including three straight, have been decided by five points or fewer. If Tampa Bay, coming off a bye week, can continue running the ball effectively (160 yards vs. Seattle), it will be difficult for the league’s 24th-ranked rushing defense to keep pace.

By the numbers: Over the last three seasons, only the Chicago Bears (18-26 ATS) and Jacksonville Jaguars (15-28 ATS) have been a worse wager than the Cleveland Browns (17-25-1 ATS). … The Browns, who are 4-6 ATS, have only one winning season ATS in the last eight years.

Analysis: The Titans are coming off a bye week. That’s good news for a team that needed time to heal. Tennessee has won seven of its last eight games (8-0 ATS) and now looks to hand the Bengals some payback for last season’s playoff loss. The Titans will have their hands full with a Cincinnati offense that has scored 79 points in the last two games, its most in a two-game span since 2005. Since Week 3, Tennessee (7-1) is tied for the league’s best record with Minnesota and Philadelphia.

Analysis: When these two teams met midway through last season, it was an ugly, turnover-filled game won by Miami, 17-9. Things have not gotten better for the Texans since then, as they’ve gone 4-14-1. But that meeting might have been a franchise-changer for the Dolphins, who are 15-4 since that win. Miami is expected to make the postseason for the first time since 2016, but it’s not inconceivable that its sights are set on next week’s game at San Francisco. That makes it difficult for me to lay two touchdowns. I’ll pass on this one.

By the numbers: The Texans have converted only 14.3 percent of their third downs in the red zone. Denver is the only team with a worse percentage (13.3). Miami is second-best in that category with a success rate of 55.6 percent. … The Dolphins have failed to cover six of their last eight games as double-digit favorites.

Analysis: This game has ugly written all over it, but it also provides a situation that I’ve bet for years. The Bears are coming off a tough road loss at Atlanta (27-24) and are playing their second road game in as many weeks. There are other parameters, but this double road angle has hit just under 63 percent of the time since 2003 and at a 57 percent clip since 2017. Chicago has won the last five meetings and nine of 12.

By the numbers: Chicago has lost three straight games that have been decided by three points or fewer. … Bears QB Justin Fields, who is questionable with a shoulder injury, has rushed for 50 yards or more in six straight games. … New York is 25-33 ATS against teams with a winning percentage under .400.

Analysis: Coming into the season, Falcons QB Marcus Mariota had just six starts in his last three seasons and none in his last two years in Las Vegas. Atlanta was supposed to be a few years away, but Mariota has his team at 5-6 and in shouting distance of a playoff spot. Only Justin Fields and Joe Burrow have more combined rushing and passing TDs than Mariota this season. With rain likely, the run game will be the deciding factor in this one.

By the numbers: The Falcons are 7-4 ATS against the NFC this season and 6-2 ATS as underdogs. … Atlanta allowed 160 yards rushing to the Bears last week. This bodes well for the Falcons, who are 45-21 ATS the week after allowing 150 yards or more on the ground. … Washington is on a 10-13 ATS slide as a favorite.

Analysis: To say Russell Wilson has been a huge miss for Denver is an understatement. There’s a reason why the Seahawks didn’t fight harder to keep the veteran QB. Not that Baker Mayfield has been any better for the Panthers. All of this adds up to being one of the most unappealing games on the schedule. Sam Darnold will now take the reins in Carolina, and I think that’s an improvement. I’m in the minority, but I’ve always thought highly of Darnold, who has only played on horrible teams. In the Broncos’ loss to the Raiders last week, it told me more about the Broncos than it did the Raiders.

Analysis: The Jaguars reportedly used their bye week to sharpen their soft defense. They’ve lost most games at the line of scrimmage, so defensive coordinator Mike Caldwell thought it was time for a change. Expect more exotic blitz packages against the Ravens, who have won four straight. As clear cut as it seems, this number gives me cause for worry. I anticipated Baltimore being around a TD favorite. But instead, we have to deal with a head-scratching number that seems to be begging the public to bet on the Ravens.

Analysis: My position on this game will remain no matter who is at QB for the Cardinals. This game gives us a betting angle that I’ve liked to recommend through the years. Underdogs coming off a blowout loss of 20 points or more are 7-3-1 ATS this season. This has been a consistent trend for years, with a 312-222 ATS record (58.4 percent) since 2004 and a 48-27 mark (64 percent) since 2020.

By the numbers: The Chargers are 7-3 ATS, including an NFL-best 5-0 ATS on the road.

Analysis: This number always indicated that Rams QB Matthew Stafford would not play this week after entering concussion protocol again. In general, I don’t like betting games with double-digit favorites. But when you factor in the loss of Stafford and elite WR Cooper Kupp, there’s no reason to put your money on a game where you’re either crossing your fingers on the Rams side or laying too much for my taste in any situation.

By the numbers: Looking at past performances by this week’s officiating crew, Adrian Hill definitely has under tendencies, with 26 of the 44 games in his four-year career cashing under tickets. This is significant, because with Bryce Perkins getting the start at QB for the Rams, you can bet their offensive linemen will do everything they can to keep him upright, which could lead to an abundance of holding calls. A crew that likes to call penalties is usually a friend to the under.

Analysis: The Niners are tied for first place in a weak NFC West division with a 6-4 record. They’ve beaten one team with a record over .500 this season, and that was in Week 2 at home against the Seahawks. I’m pumping the brakes on the San Francisco enthusiasm until it wins a playoff game. It’s not inconceivable that the Niners are likely looking ahead to a date with the 7-3 Miami Dolphins next week.

By the numbers: The Saints have dropped their first two games as road underdogs this season. But they’re on a 21-11 ATS run in the role. … Our selection is less about history and more about this being a flat spot for the Niners after rolling in football-crazed Mexico last week.

Analysis: The concern about the Eagles goes back to the week before they suffered their first loss to the Commanders. In their Week 9 win over the Texans, Philadelphia’s run defense was exposed after Houston scorched it for 168 yards. The Eagles have since given up 251 rushing yards to Washington and Indianapolis and now we’re supposed to lay a touchdown? I don’t think so.

By the numbers: Green Bay has covered six of the last eight meetings. … The Eagles are on a 19-26 spread slide as favorites, including 7-11 ATS when they’re favored between 5½ and 7½ points. … The Packers’ strength is their running game, spelling bad news for Eagle bettors in a close affair.

Analysis: It’s been 17 years since the Colts beat the Steelers, who have won the last seven meetings. If Pittsburgh extends that streak Monday, you can officially ring the death knell on Indianapolis’ chances of making the playoffs. The Colts are 4-6-1, but it’s worth noting that a pair of 17-16 home losses and a Week 1 tie with the Texans are the difference between that and being 7-4. This will be tough test for the Colts, especially with the Pittsburgh ground game coming to life.

By the numbers: The Steelers have won 20 of 26 meetings with the Colts. That is the best record any one franchise has over another with at least 25 games played. … Pittsburgh has covered five of the last six meetings.