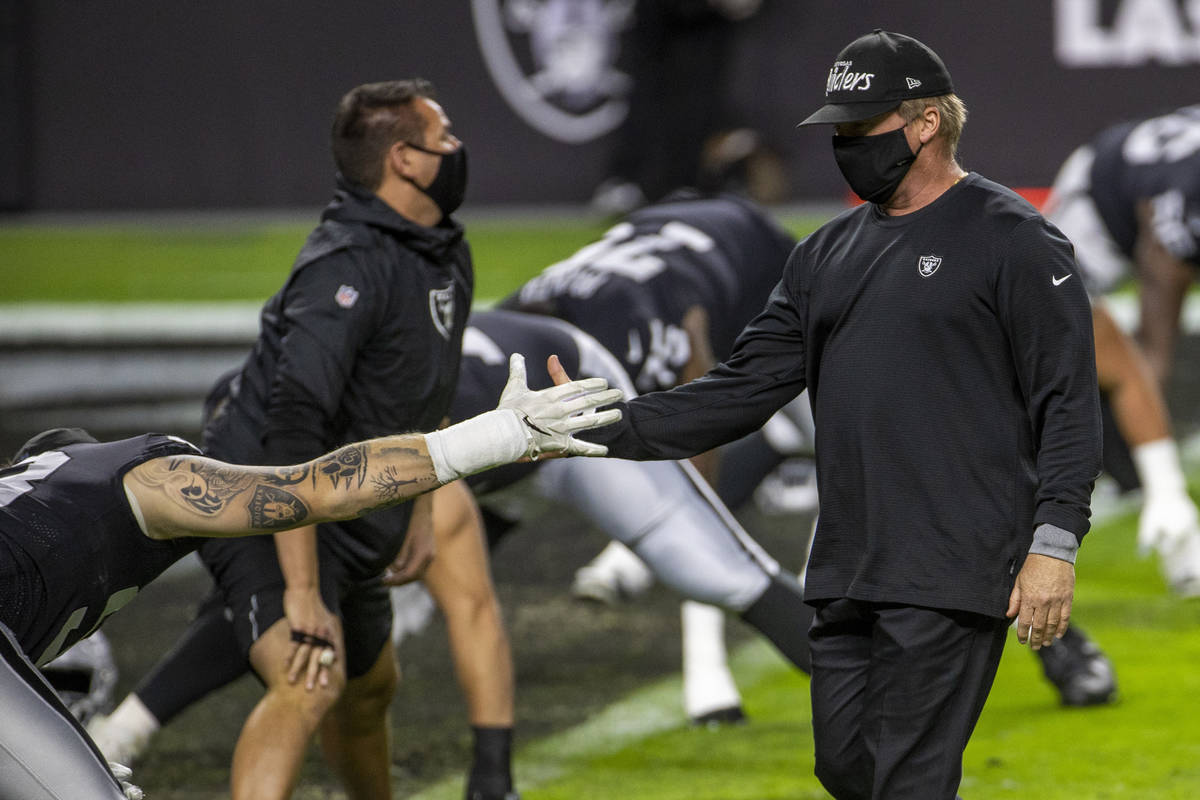 Analysis: Sure, I have become a Raiders fan, but that doesn’t mean I will play against my pocketbook. Coach Jon Gruden has this team believing that they can win and they can. The Raiders beat Kansas City and almost swept the season series. A case can be made that injuries and the virus have hurt the Raiders’ chemistry. I can’t see them not showing up after last week’s performance in a 43-6 loss at Atlanta. But the Raiders best beware as the Jets are desperate to land a win.

Analysis: Lions players celebrated on social media after coach Matt Patricia, a Bill Belichick disciple, was fired. But the players better be careful what they wish for. The Bears have lost five straight and need to regroup or coach Matt Nagy also will be handed his walking papers. I don’t know how these two clubs have managed to win nine games between them. Chicago is averaging only 19.6 points per game and Detroit’s defense allows 29.8 ppg. Lions quarterback Matthew Stafford still has thumb issues and linebacker Khalil Mack is expected back for the Bears.

By the numbers: Detroit is on a 5-12 ATS slide vs. the NFC. … The Lions are on a 17-5 over run after a double-digit loss. … Chicago has covered four of the last five meetings at Soldier Field. … The Bears are on a 13-3 under run at home.

Analysis: The Bengals won only twice behind QB Joe Burrow and managed only 155 total yards against the Giants. So what chance does QB Brandon Allen have against the Dolphins’ opportunistic defense? Whether it’s Tua Tagovailoa or Ryan Fitzpatrick at QB for Miami, it won’t matter. The playoff-bound Dolphins are playing with plenty of motivation and confidence and should dominate here.

By the numbers: The Bengals are on an 11-3-2 under streak as road underdogs. … Miami is on a 6-1 under run as favorites and the under is 4-1-1 in the last six meetings. … The Dolphins are on a 5-1-1 ATS surge as home favorites and are 6-1 ATS in their last seven games overall.

Analysis: How ‘bout them inconsistent Colts? They just can’t seem to string a few wins together before they throw in an uninspired performance like last week’s 45-26 loss to Tennessee. Philip Rivers’ TD/interception ratio is 16/9 and he still is vulnerable to the pick-6. Houston is No. 30 in yards allowed per game (409.5) and No. 31 in rushing yards allowed (154.7). Still, the Texans are 4-3 since coach Bill O’Brien was fired.

Analysis: Jacksonville has lost 10 straight games. The Vikings were expected to challenge the Packers in the NFC North, but they’ve lost four of their six home games. Still, Minnesota has won four of its last five games overall. With Dalvin Cook’s running and Kirk Cousins’ passing against the NFL’s No. 31 total defense (415.6 ypg), the Vikings should cruise to a convincing victory.

By the numbers: The Jaguars are on a 3-7 ATS skid as road underdogs. … The Vikings are riding a 47-23-1 cover streak on FieldTurf.

Analysis: The way I see it, Saints backers are loving it when Drew Brees sits out. Last year, Teddy Bridgewater went 6-0 ATS as Brees’ replacement and New Orleans is 2-0 ATS this season with Taysom Hill under center. The defense has dominated lately, allowing only 28 points in the Saints’ last four games. New Orleans has the NFL’s No. 1 total defense, allowing 284.9 ypg. However, Atlanta excels as a home underdog, going 11-4 ATS in its last 15 games, and the Falcons have won four of six games under interim coach Raheem Morris.

Analysis: Watch out for this game. I imagine most bettors will see the Titans as a very inviting side with Derrick Henry running with authority over and through defensive backs. Both clubs are 8-3 but are perceived differently by the public. These teams rank Nos. 1 and 2 in rushing yards per game, with Cleveland averaging 161.4 and Tennessee 158.2.

Analysis: New York lost QB Daniel Jones for at least a week with a hamstring injury while Seattle returns home after sleepwalking past the grounded Eagles. The Giants have played well, even in losses, going 7-4 ATS. But this is a bad spot for New York as the Seahawks are getting healthy and should dominate.

By the numbers: Seattle is 4-1 ATS at home and has covered the last four meetings. … The over is 5-2 in the last seven meetings. … New York is 20-7 ATS as a road underdog.

Analysis: It doesn’t seem right that the Rams are favored here. They haven’t been able to put more than two straight good games together while losing twice to the 49ers and once at home to the Dolphins. Six weeks ago, the Cardinals were flying high after beating Seattle. But they’ve lost three of their last four games, with the lone win over the Bills thanks to a Hail Mary. The Rams are No. 2 in total defense (296.7 ypg) and No. 6 in total offense (389.2 ypg).

Analysis: The Eagles are dreadful. The Packers crushed the Bears last week and Aaron Rodgers leads the league’s No. 4 total offense (392.9 ypg). Green Bay has scored more than 40 points in three games this season and should hit that mark again this week. Philly has the NFL’s No. 28 total offense (322.8 ypg) and QB Carson Wentz (NFL-high 15 interceptions) is turning the ball over every chance he gets.

Analysis: Cam Newton is right. There’s no need to apologize for winning, even after throwing for only 98 yards and two interceptions in last week’s victory over Arizona. We’re still trying to figure out how the Patriots won. Must be a Belichick thing. It’s certainly not an Anthony Lynn thing. The Chargers coach still needs to apologize for his clock mismanagement in last week’s 27-17 loss at Buffalo. Huge coaching edge for New England here, but LA has more firepower.

Analysis: All four Broncos QBs combined who missed last week’s loss to the Saints couldn’t match Chiefs QB Patrick Mahomes. But it will be Drew Lock’s job alone this week. Mahomes is really something else and could end up as the GOAT before it’s all said and done. Will the Chiefs have the focus needed to get past this large number? They whipped the Broncos 43-16 at Denver earlier this season.

Analysis: Steelers coach Mike Tomlin described his team’s play in Wednesday’s win over the Ravens as “junior varsity.” Pittsburgh is playing on five days rest while Washington will have 11 days rest after defeating Dallas, 41-16, on Thanksgiving. Pittsburgh is No. 3 in total defense (298.9 ypg) and Washington is No. 4 (309.5). The Steelers are No. 1 in passing defense (193.2 ypg) and the Football Team is No. 2 (194.6). Washington’s offense is running much better under veteran QB Alex Smith.

By the numbers: Washington is 6-2 ATS after a win. … The Football Team is on a 7-1 under run vs. a winning team. … The Steelers are 4-1 ATS in the last five meetings and 7-2 ATS in their last nine games overall.

Analysis: San Francisco is 1-4 at home and might be glad to have its remaining home games moved to Arizona. The 49ers’ inconsistent season can be blamed on a bevy of injuries. But they’ve still defeated the Rams twice and are getting stronger as key players are returning, including running back Raheem Mostert.

Analysis: Baltimore has lost three straight and still has COVID-19 issues. But if you love to hate the Cowboys, this might be a good spot for you. Injuries have decimated Dallas, which has suffered losses on both sides of the ball this season. Running back Ezekiel Elliott has fumbled way too often and the Cowboys have the NFL’s No. 32 scoring defense, allowing 32.6 ppg.