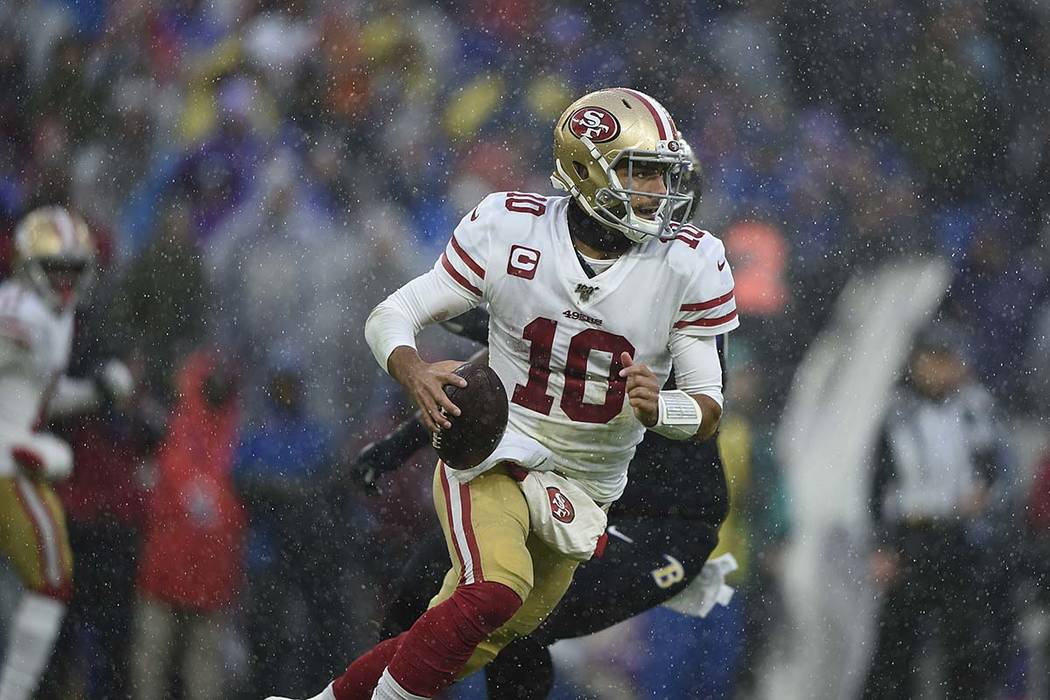 San Francisco quarterback Jimmy Garoppolo runs the ball against the Baltimore Ravens in the first half of an NFL football game, Sunday, Dec. 1, 2019, in Baltimore, Md. (AP Photo/Gail Burton)

Analysis: Last week’s escape against the 49ers reminded everyone that Baltimore indeed can be challenged and is just the sort of assignment undervalued Buffalo will embrace. The Bills responded to the national stage in a big way on Thanksgiving at Dallas, and Buffalo’s gnarly defense and a probable Niagara chill can slow Ravens QB Lamar Jackson.

By the numbers: The Ravens are 7-1 against the spread in their last eight road games. … The Bills are 4-0-1 ATS in their last five games and 4-0-1 in their past five as an underdog.

Analysis: Don’t look now, but the hottest team in the NFC East might be the Redskins, with a now-healthy Derrius Guice teaming with Adrian Peterson to form a nice ground attack that rushed for 248 yards at Carolina. That has made for a bit of a softer landing for rookie QB Dwayne Haskins. The Packers took awhile to put away the Giants last week and haven’t had a truly easy game in more than a month.

By the numbers: The Redskins have covered four of their last six games. … The under is 8-5 in Redskins games since late 2018.

Analysis: Denver coach Vic Fangio is scheming the Broncos’ defense well enough to give Denver (6-2 ATS in its last eight games) a look most Sundays. But QB Drew Lock still is learning on the fly and will have to deal with Romeo Crennel’s well-disguised coverages that have unnerved rookie quarterbacks before.

Analysis: Sean Payton can use the next month to rid his Saints of some of their recent bad habits (among those a slew of penalties and dropped passes). But they’ll need a cleaner effort to outscore the 49ers, who should have convinced any remaining doubters after their near miss against red-hot Baltimore following a dominating win over the Packers.

By the numbers: The 49ers are 5-1 straight up and ATS on the road this season. … The Saints are 2-7 ATS in their last nine home games.

Analysis: Now that QB Andy Dalton has taken back the wheel for the offense, I’m less scared to back Cincinnati. The Bengals’ revived defense pressured Sam Darnold into oblivion last Sunday. That’s bad news for the erratic Browns if they can’t protect QB Baker Mayfield better than last week (five sacks against the Steelers).

Analysis: We’ll see how the Panthers react to the firing of coach Ron Rivera. But QB Kyle Allen seems to have hit the proverbial wall, the defense got strafed by the Redskins for 248 rushing yards last week and recent efforts suggest the Falcons are still playing hard.

By the numbers: Atlanta has won and covered the last four in the series, including a 29-3 win at Charlotte on Nov. 17. … The under is 5-1 in the last six meetings.

Analysis: It’s worth noting that Matthew Stafford’s subs at quarterback, David Blough and Jeff Driskel (now on injured reserve), have at least given the Lions a chance in recent weeks before the defense inevitably failed. Coming off a draining Monday nighter at Seattle and having labored against the likes of the Redskins and Broncos lately at home, I’m not sure I want to lay a heavy price with the Vikings.

By the numbers: The Lions broke a six-game spread losing streak on Thanksgiving, but have not covered their last three road games. … The Vikings have covered the last four in the series.

Analysis: After last week’s stinker at Cincinnati, we’re reminded that the Jets need at least another offseason of roster upgrades before threatening respectability. The Dolphins have beaten the Jets once, and QB Ryan Fitzpatrick has led Miami to wins in three of his last five starts.

By the numbers: The Dolphins have won outright the last four series meetings and have covered six of their past eight games.

Analysis: Can we trust the Buccaneers to continue the recent uptick that has seen them cover three of their last four games? Bruce Arians finally seems to be getting through to QB Jameis Winston, whose efforts have improved. The Colts still are missing the field-screeching dimension of injured WR T.Y. Hilton.

Analysis: Jacksonville has lost four straight — by 23, 20, 22 and 17 — and coach Doug Marrone might not survive after the season. Though also 4-8, the Chargers have been close in their losses. The lesser of two evils argument suggests the Chargers, especially with Jacksonville back to rookie Gardner Minshew at quarterback, are the play.

Analysis: The Patriots have relinquished pole position in the AFC. Recent improvements on defense suggest the Chiefs no longer need big games every week from Patrick Mahomes to prevail.

Analysis: Mike Tomlin deserves Coach of the Year consideration, down to third stringers in key positions on offense, yet the Steelers are in a playoff spot. QB Devlin Hodges plays within himself, and the Steelers have the better defense.

Analysis: This week has maxed out this price on the Titans, as there probably wouldn’t have been a week yet this season when Tennessee would be minus 3 at Oakland. But Tennessee is a different team with Ryan Tannehill, who has never lost to the Raiders, starting at quarterback.

By the numbers: The Titans are 5-1 straight up and ATS since Tannehill took over, and all six of those games have gone over the total.

Analysis: The Rams have not matched up badly with the Seahawks and could have won the first meeting. But Seattle’s road record has been pristine and don’t get carried away by the Rams’ win over Arizona. Those questions we had earlier in the season about the Rams have yet to be answered. There’s more involved than just Russell Wilson over Jared Goff at quarterback, but that is an edge for Seattle.

By the numbers: The Seahawks are 6-0 straight up on the road this season and have covered five of the last six against the Rams. … The last four meetings went over the total.

Analysis: Philadelphia is lucky to be alive in the NFC East race. The faltering Giants provide two chances for the Eagles to get well in December. But before laying points, note that the road underdog has been the one decent role lately for the Giants.