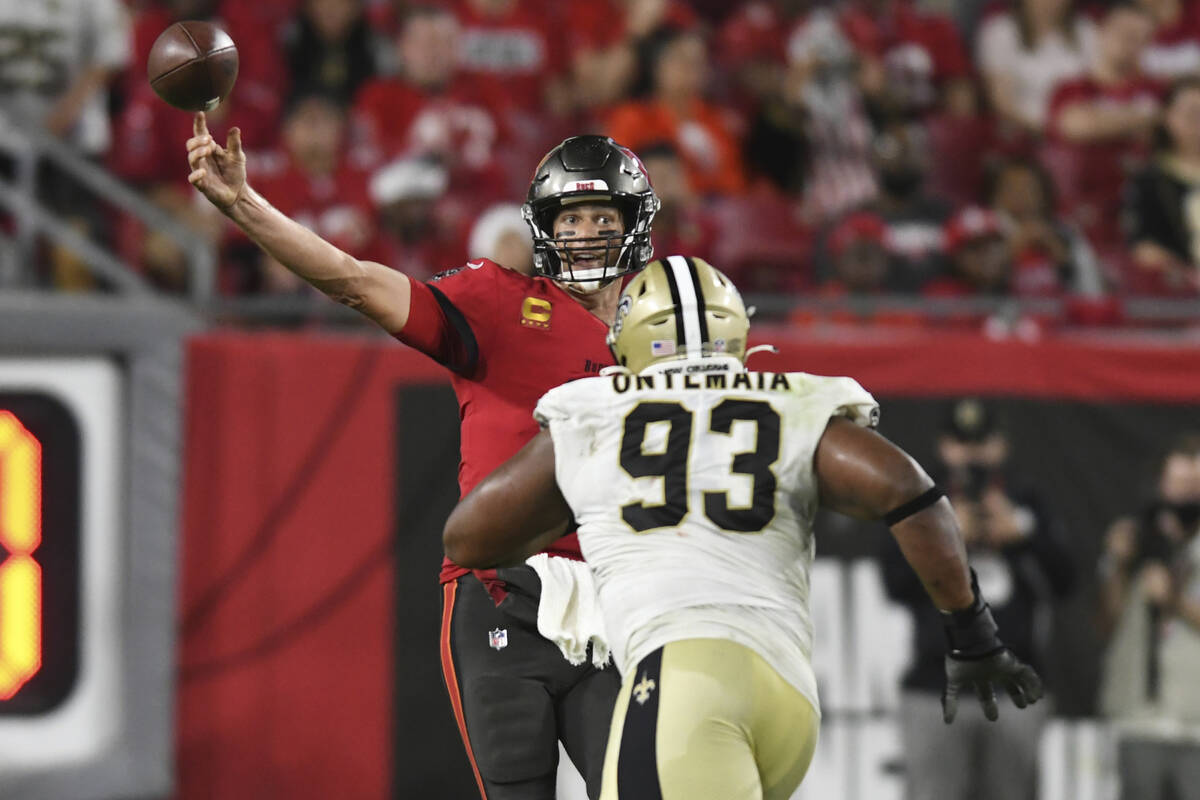 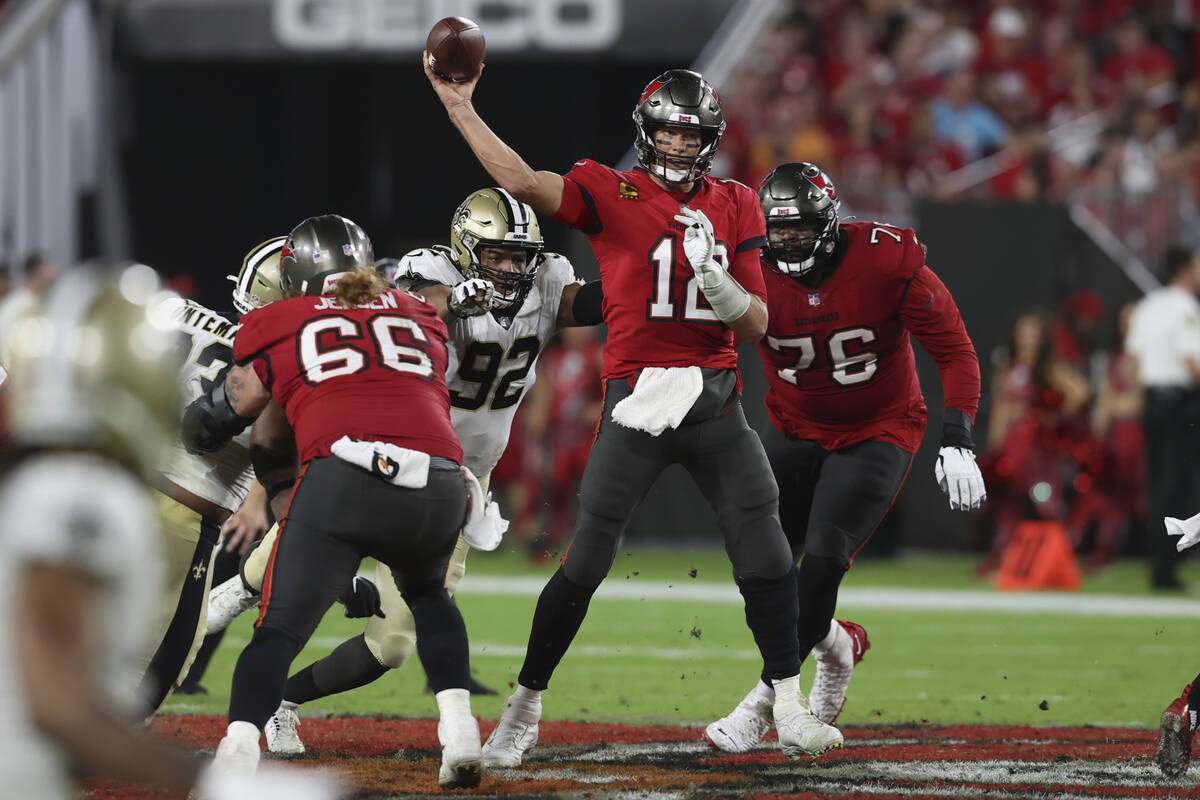 Analysis: Carolina gets Tom Brady coming off last week’s 9-0 home loss to the Saints. But Tampa Bay is hobbled with wide receiver Chris Godwin out for the season, linebacker Lavonte David and running back Leonard Fournette on injured reserve, and wide receiver Mike Evans (hamstring) and safety Antoine Winfield (foot) out this week. The Bucs will welcome the return of wideout Antonio Brown.

By the numbers: Carolina has not fared well as a home underdog under coach Matt Rhule, losing by 23 to Tampa Bay last season and by 26 and 18 against teams that made the playoffs. … The Panthers are 23rd in the NFL in sack percentage allowed, and the Bucs are third in generating pressure.

Analysis: The Giants have lost three straight and haven’t been competitive. They are hobbled at quarterback and receiver. New York’s last win was 13-7 at home over the Eagles. Philadelphia has won four of its past five games, with all four wins by double digits. The loss was to the Giants.

By the numbers: The Giants are on a 1-7 under streak, and this game also points to the under. … By my metrics, Philadelphia is second in the NFL in rushing offense, and the Giants rank 25th in rushing defense.

Analysis: The Chargers own the sixth seed in the AFC playoff race but must continue to win to make the postseason. They have been hit by COVID and will be missing key players. Los Angeles won’t get any sympathy from Houston, which could be without as many as 13 starters because of COVID.

By the numbers: As home underdogs of seven points or more this season, Houston has lost by 20, 31, 16, 3 and 15 points. … Against five good offenses similar to the Chargers, the Texans have allowed an average of 34 points.

Analysis: The Lions will try to make it two straight wins and three of four after last week’s home upset of the Cardinals. The Lions have played a tough schedule, facing only one team with a losing record in the Bears. The Falcons haven’t been great, but they’re 4-1 against the worst teams they’ve faced.

By the numbers: Atlanta ranks as my No. 30 offense and No. 31 defense, so asking this team to win by a touchdown could be a stretch.

Analysis: A loss by the Ravens would almost extinguish their chances of winning the division. The Baltimore secondary remains beat up with cornerback Tavon Young now in concussion protocol. The Ravens are missing all four of their season-opening starters in the secondary and dealing with injuries to the reserves. That could be significant, as Cincinnati is seventh in the league in pass plays of 20 yards or more and the Ravens are No. 31 in allowing big pass plays.

By the numbers: The Bengals are on a 6-2 over run in home games started by Joe Burrow against teams with a .500 record or better, with all eight games totaling 47 points or more.

Analysis: Vikings running back Dalvin Cook will miss the game after testing positive for COVID-19. The Rams are starting to get back many of their players from COVID, with tight end Tyler Higbee and safety Jordan Fuller the biggest names yet to be taken off the list. Minnesota needs to win to remain in the playoff hunt, and the Rams are chasing the NFC West title.

By the numbers: The Vikings qualify for a trend that is 75-40-1 ATS: nondivision home underdogs off a road win vs. road favorites off a home win. … As a road favorite under coach Sean McVay, Los Angeles has allowed an average of 27 points against above average offenses and 30 ppg this season.

Analysis: Both teams must view this as a chance to win against another equally horrible team. The Jets have 15 players and coach Robert Saleh on the COVID list.

By the numbers: Jacksonville has lost 15 straight road games. … The Jaguars have a 5-1 under record on the road.

Analysis: The AFC East is on the line. A Bills loss would basically eliminate them from a possible division title and hurt their playoff chances. Both teams have played relatively easy schedules, so we should find out plenty about each team in what figures to be a close game. Players out with COVID include Buffalo wideout Cole Beasley and New England receiver Kendrick Bourne.

By the numbers: Bills QB Josh Allen is 10-4-1 ATS as a road underdog. Only two of those 15 games resulted in a loss of more than seven points, so a Buffalo teaser might be a good play. … The Bills have a 4-0 over record as road underdogs.

Analysis: Chicago dominated Monday’s game against the Vikings, but made mistake after mistake en route to a 17-9 loss. Now, the Bears are affected by players on the COVID list.

By the numbers: The Bears are 8-2 ATS as road underdogs vs. nonplayoff teams who finished under .500. … Seattle is 3-10 ATS as a home favorite of six points or more.

Analysis: The Chiefs have their sights set on clinching the AFC’s No. 1 seed. Pittsburgh needs a win to stay in playoff contention. The Chiefs could be affected by players on the COVID list, but they got star defensive tackle Chris Jones and cornerback Charvarius Ward back, and cornerback L’Jarius Sneed also has returned after dealing with a death in his family.

By the numbers: Kansas City is fourth in my rushing rankings, and Pittsburgh is No. 23 in rushing defense. … The Chiefs are riding a 14-5 under streak as home favorites of seven points or more. … Kansas City has allowed 17 points or fewer in seven of its past nine games, including five straight home games.

Analysis: Both teams are fighting to stay alive in the playoff race and can’t afford another loss. Drew Lock will start at quarterback for Denver. Both teams are dealing with COVID issues.

Analysis: Washington is on life support for the playoffs. Safety Landon Collins will miss the game and cornerback William Jackson is questionable, putting the Football Team’s defense at a disadvantage against Dallas’ potent passing game. The Cowboys are almost completely healthy, other than left tackle Tyron Smith, and returning home after three consecutive road games.

By the numbers: My metrics make Dallas the NFL’s No. 8 pass offense, and Washington ranks No. 31 in pass defense. … With Dak Prescott at quarterback, the Cowboys have scored 31 points or more in 13 of their past 17 home games. … The Football Team is 1-4-1 ATS as a road underdog of more than four points.

Analysis: Rookie QB Ian Book is expected to start for the Saints after Taysom Hill and Trevor Siemian hit the COVID list. Miami has played only one road game since Oct. 31. This figured to be a much tougher matchup for the Dolphins than their recent stretch of games against the Giants, Panthers, Texans and Jets twice.

By the numbers: The Saints qualify for a trend that is 19-55-6 ATS and applies to teams with a win percentage of .250 or more after an outright win as an underdog of more than 10 points. … Miami had limited five straight foes to 17 points or fewer before allowing 24 to the Jets last week. … The Saints have surrendered only nine points in their past two games.