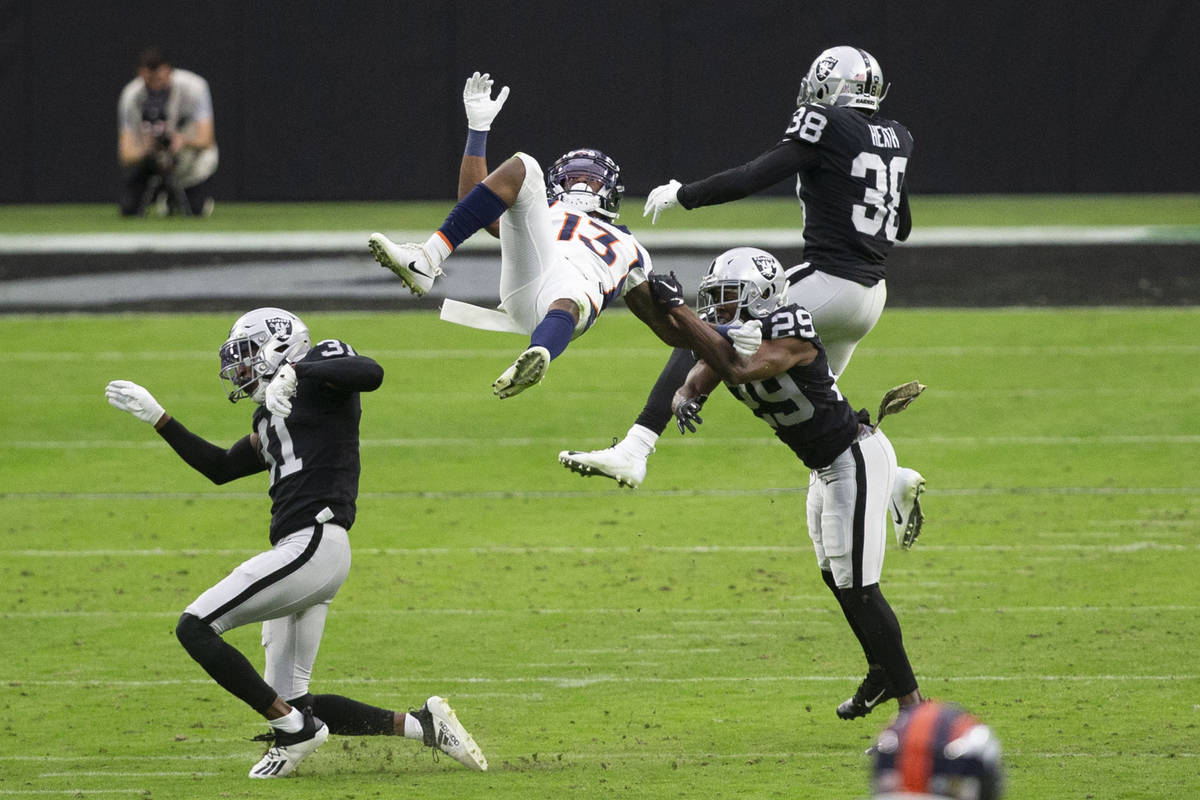 Analysis: The Broncos rarely start games strong and have an NFL-high 20 turnovers. The Raiders’ defense can’t get a key stop to save their lives and has allowed an average of 34.3 points in the last six games. I’ll flip a coin and take the Raiders, who have quality wins over the Chiefs, Saints and Browns. They also hammered Denver 37-12 in the first meeting.

By the numbers: The Raiders have scored at least 20 points in 13 games and average 26.8 ppg. … Denver QB Drew Lock has had a turnover in 11 straight games.

Analysis: With RB Ezekiel Elliott back in the lineup and relatively healthy, the Cowboys’ offense seems to be balanced. After a slow start, QB Andy Dalton looks like a great pickup for Dallas. He threw for 377 yards in last week’s win over Philadelphia and should reach the 300-yard mark against New York as the Cowboys’ passing game suddenly looks unstoppable.

By the numbers: The Giants’ inept offense is the main reason they’ve gone under in 11 of 15 games. … The Cowboys have outscored the Giants 108-26 in the last three meetings. … Dallas is 6-9 ATS but has won and covered its last three games.

Analysis: The billing of this game is that the Steelers will rest many starters and the Browns must win to get into the playoffs. What it really comes down to is that Cleveland can run the ball and Pittsburgh can’t. Browns RBs Nick Chubb and Kareem Hunt should double the 75 yards rushing Cleveland mustered in its 38-7 loss to the Steelers in Week 5.

By the numbers: The Browns can clinch their first playoff berth since 2002 with a win. … The Steelers are on a 6-2 ATS run in the series. … Pittsburgh has the NFL’s No. 2 scoring defense, allowing 19.2 points per game.

Analysis: It took the Jets 14 games to finally win one. But they are on a roll now, winning their last two games. No one knows if New England coach Bill Belichick will start Cam Newton, Jarrett Stidham or Brian Hoyer at quarterback. But one thing I’m pretty sure of is that the Patriots have quit on the season. They have topped 126 yards passing in one of the last five games.

By the numbers: Newton isn’t the answer for the Patriots, as he has thrown five touchdown passes this season. … New England has lost and failed to cover the spread in each of its last three games.

Analysis: This would be a must miss game under most circumstances. But with the Lions missing QB Matthew Stafford and the Vikings without RB Dalvin Cook, I wouldn’t wish watching this game on my worst enemy. After the Vikings gave up 52 points to the Saints on Christmas Day, they might rebound and show a little pride in the finale. The Lions, coming off a 47-7 beatdown by the Buccaneers, have allowed 41 points or more in five games. That’s the most since 1948 for defenseless Detroit.

By the numbers: Minnesota is on a 10-5 over run. … The Vikings have won and covered the last six meetings.

Analysis: With Tampa Bay entrenched in the second slot in the NFC South, I can’t see it going all out in this game. Atlanta is playing hard for interim coach Raheem Morris, but it blew a 17-point lead in a 31-27 loss to Tampa Bay two weeks ago. I can’t see the Bucs winning by more than a TD in a game with little meaning for both sides.

By the numbers: Tom Brady has completed at least 27 passes to eight Tampa Bay receivers. … The Falcons have lost four straight games by fewer than six points each.

Analysis: The Ravens must win to get into the playoffs. Baltimore destroyed Cincinnati 27-3 in Week 5, when the Bengals were much healthier and still had QB Joe Burrow. Cincinnati coach Zac Taylor won two consecutive games for the first time in his career last week, but if you’re wagering on him to win again this week, it’s not a sound bet.

By the numbers: The Ravens have held four of their last five opponents to fewer than 20 points and have 11 sacks in their past two games. … The Bengals are on a 6-2 cover streak in the series.

Analysis: The Bills beat the Dolphins 31-28 in the first meeting. Since that game, Miami has allowed only 13 TD passes in its last 14 games. Buffalo might be playing the best football in the league. The only reason I’m picking Miami is I can’t see the Bills risking playing their key starters for more than a half.

By the numbers: The over is on a 9-2 streak in the series, but with Bills QB Josh Allen expected to play less than a half and a 50 percent chance of snow, the under might be worth a look. … The teams are a combined 22-8 ATS.

Analysis: I usually fade Chargers coach Anthony Lynn, but I can’t see the Chiefs playing more than 10 of their starters with the No. 1 seed and playoff bye locked up. Los Angeles QB Justin Herbert has set an NFL rookie record for TD passes (28) and thrown for 4,034 yards. The Chiefs are 6-2 ATS in the last eight meetings, but in Week 2, the Chargers took them to overtime before losing 23-20.

By the numbers: Kansas City is on an 0-6-1 ATS slide, winning each of its last seven games by six points or less. … The Chargers blew a 17-6 fourth-quarter lead in the Week 2 loss.

Analysis: The winner gets a playoff berth. Arizona QB Kyler Murray isn’t 100 percent, but would you rather bet on the Rams with QB John Wolford taking his first NFL snap?

By the numbers: Rams coach Sean McVay has won all seven meetings with the Cardinals, going 6-1 ATS. … Los Angeles is 11-4 to the under, and Arizona is 10-5 to the under.

Analysis: The Texans haven’t been good this season, but they have been far worse since their top wideout, Will Fuller, and best defensive back, Bradley Roby, were suspended. It wouldn’t shock me if Houston, with nothing to play for, pulls QB Deshaun Watson at halftime or earlier. What makes this awful season even worse for the Texans is that the Dolphins have their first-round and second-round picks in the 2021 draft. The Titans can clinch the AFC South with a win.

By the numbers: Tennessee is 1-7 ATS in the last eight meetings in Houston. … The Titans are on a 22-6 over streak in Ryan Tannehill’s 28 starts.

Analysis: With Alvin Kamara out (reserve/COVID-19 list), this could be a struggle for the Saints. To say he’s important to the offense — 932 rushing yards and 16 TDs and 83 receptions for 756 yards and five TDs — is an understatement. I see the Saints escaping with a win similar to their 27-24 triumph over the Panthers in Week 6.

By the numbers: New Orleans has clinched its fourth straight NFC South title. … Carolina has lost 10 games, but it has had a chance to tie or take the lead in the fourth quarter in eight losses.

Analysis: This isn’t your typical 11-4 team racing toward the finish line. Except for the quarterback position, San Francisco is as healthy as it has been since early in the season. The Seahawks have one glaring weakness — their defense can’t put pressure on the quarterback unless they are blitzing safety Jamal Adams or one of their linebackers. I can’t back the Seahawks when they might pull QB Russell Wilson if the Packers get a big lead over the Bears and there is no shot at a first-round bye.

Analysis: The Jaguars haven’t won since upsetting the Colts 27-20 in the season opener. The strange part about that game was that Indianapolis outgained the Jaguars by 204 yards. Colts running back Jonathan Taylor should take the fight right out of the defenseless Jacksonville defense.

By the numbers: Jacksonville is on a franchise-record 14-game losing streak. … The Jaguars are 9-1 ATS in the last 10 meetings.

Analysis: Most people don’t realize the Bears are 8-7. They’ve had a roller coaster of a season, but with the return of RB David Montgomery, the offense is at least average. Bears QB Mitchell Trubisky seems to be settling in since offensive coordinator Bill Lazor started calling the plays in mid-November.

By the numbers: The Packers have covered six of the last nine meetings, including a 41-25 win in Week 12. … Chicago is 6-2 with Trubisky starting this season.

Analysis: One of the hardest games to handicap because Washington’s top three skill players — QB Alex Smith, RB Antonio Gibson and WR Terry McLaurin — are listed as questionable. I’m going to take a guess and predict that at least Smith and Gibson play. That should be enough to get the job done, as Eagles QB Jalen Hurts is getting exposed with more film for teams to break down his weaknesses.

By the numbers: Washington is 10-5 when Smith starts and 6-26 when any other quarterback starts. … Hurts has at least 50 rushing yards in each of his three starts. … The Eagles are tied with the Cowboys and Texans for the NFL’s worst ATS record at 5-10.