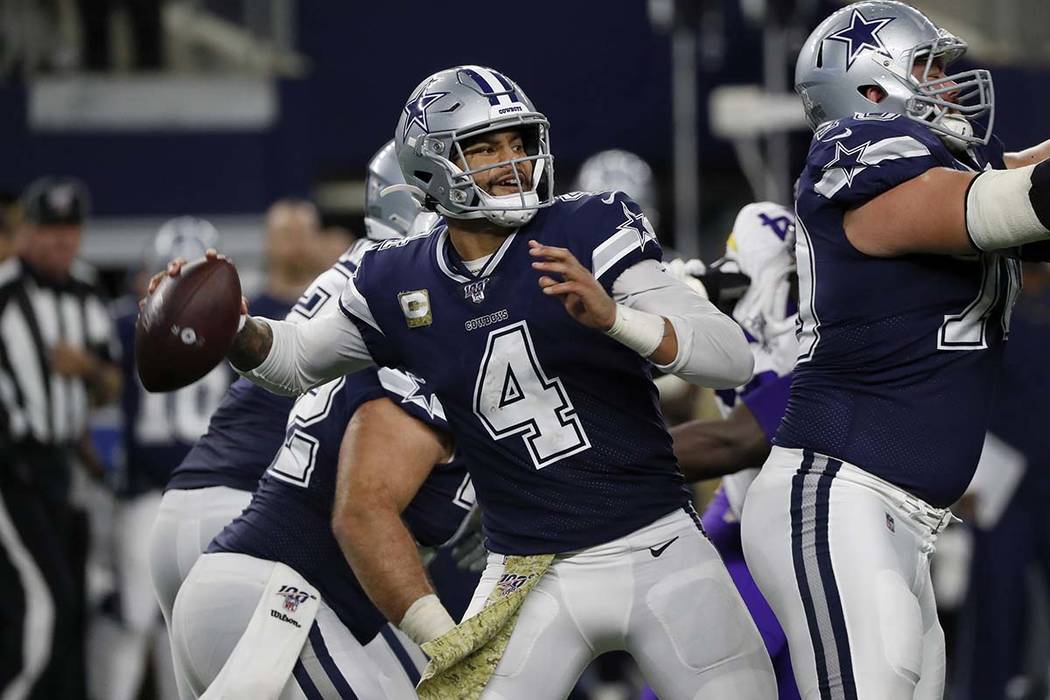 Dallas Cowboys quarterback Dak Prescott throws the ball during the second half of an NFL football game against the Minnesota Vikings in Arlington, Texas, Sunday, Nov. 10, 2019. (AP Photo/Roger Steinman)

New York Jets at Washington (-2½, 38): The Jets have failed to cover three of their last four games and six of nine. Washington is 3-6 ATS, and the under is 7-3 in Redskins games since late last season. Edge: Slight to under.

Buffalo (-7, 40½) at Miami: The Dolphins are on a 5-0 spread uptick, but the Bills are 3-1 ATS on the road this season. The under is 8-3 in Bills games since late last season, but two of the three overs came against the Dolphins. Edge: Dolphins.

New England (-4, 45) at Philadelphia: The Eagles are 2-1 as underdogs this season but 3-3 in the role since last season. New England is 4-5 ATS in its last nine road games, and the under is 14-4 in the Patriots’ past 18 regular-season games. The Patriots are 4-4 ATS in their last eight games after a regular-season loss. Edge: Under.

Cincinnati at Oakland (-11½, 48½): The Raiders have covered three in a row and five of their last six games. The over is 6-1 in Oakland’s last seven games. The Bengals are 7-1 ATS in their last eight games as a true visitor, and the under is 7-0-1 in their past eight games away from home. Edge: Slight to Bengals.

Kansas City (-4, 52) vs. Los Angeles Chargers at Mexico City: The Chargers are 2-3 ATS away from home this season, but are 9-5-1 in their last 15 games as an underdog. The Chiefs have covered four of the last five meetings. The under is 9-3 in the past 12 regular-season Chargers games. The over is 13-5 in Kansas City’s past 18 games. Edge: Chiefs.