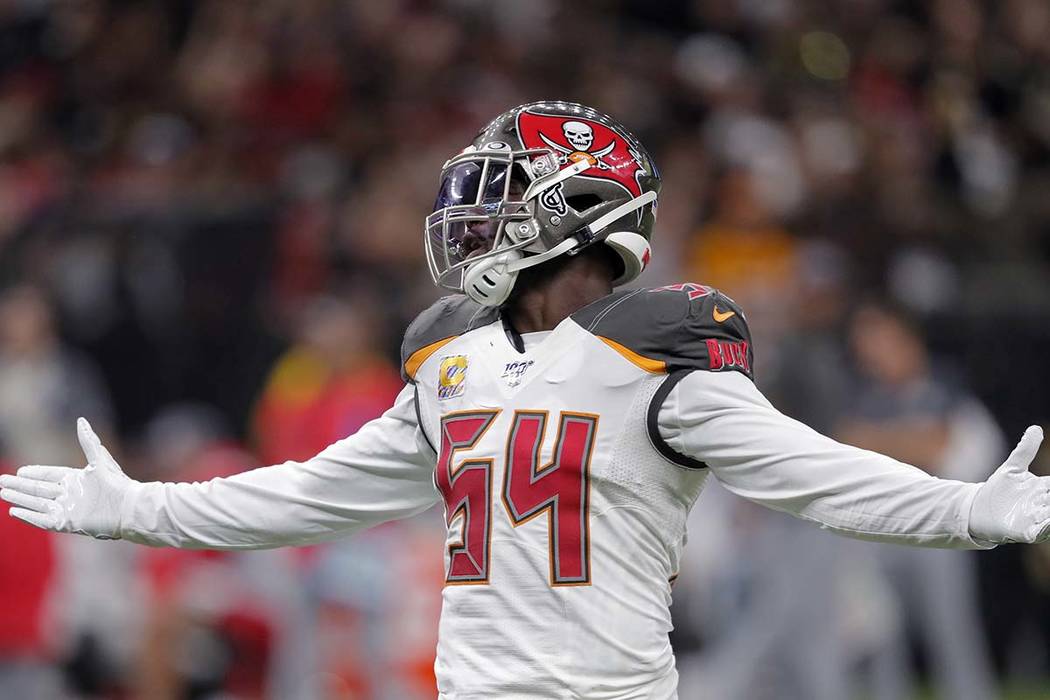 Tampa Bay Buccaneers outside linebacker Lavonte David (54) reacts between plays in the first half of an NFL football game against the New Orleans Saints in New Orleans, Sunday, Oct. 6, 2019. (AP Photo/Bill Feig)

Carolina (-2½, 47) vs. Tampa Bay, at Tottenham Hotspur Stadium, London: The teams have split spread decisions the past three seasons. The under is 7-4 in the Buccaneers’ past 11 games, and unders are 5-1 in the last six meetings. Edge: Slight to under.

Cincinnati at Baltimore (-10½, 48): The Bengals are 5-1 in their last six games as an underdog. The Ravens are 1-6-1 against the spread in their last eight home games. The Bengals have covered the last three meetings. Edge: Bengals.

Seattle (-1, 46) at Cleveland: The Seahawks are 7-1 ATS in their last eight road games. The Browns have not covered their last three home games. Edge: Seahawks.

New Orleans at Jacksonville (-2½, 43): The under is 7-3 in the Saints’ last 10 road games. The under is 6-3 in Jacksonville’s last nine home games. The Jaguars are 3-1 ATS with Gardner Minshew at quarterback and 4-1 as home underdogs since last season. Edge: Jaguars and under.

San Francisco at Los Angeles Rams (-3, 50½): The 49ers had covered five straight in the series before last season when the Rams covered both. San Francisco has won and covered its first two road games this season after a 2-6 ATS road record last season. Four of the last five games in the series have gone over. The Rams are 2-6 ATS in their last eight regular-season home games. Edge: Slight to 49ers and over.

Detroit at Green Bay (-4, 46½): The Lions are on a 6-2 spread uptick since late 2018. Detroit coach Matt Patricia is 5-2 as a road underdog since last season, and the Lions have won and covered the last four meetings. The over is 6-1 in the last seven games in the series. Edge: Slight to Lions and over.