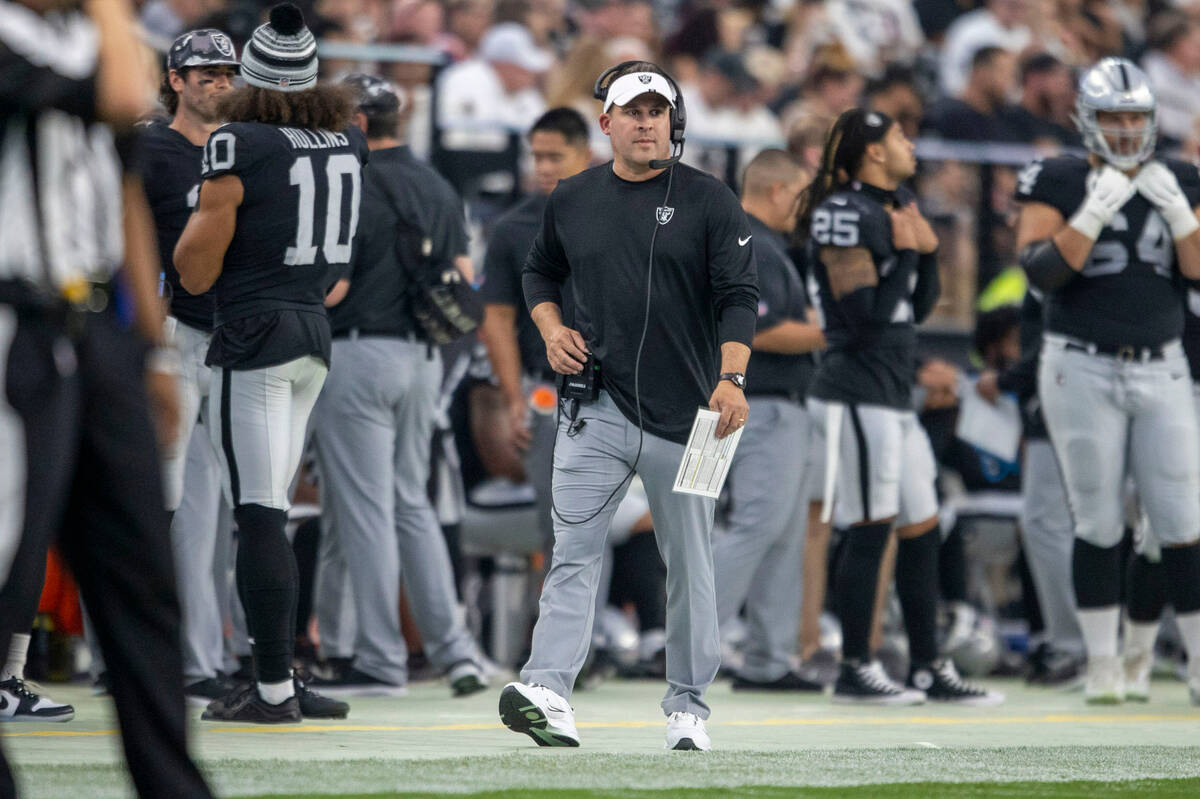 Raiders head coach Josh McDaniels walks the sideline during the second half of an NFL game against the New England Patriots at Allegiant Stadium on Friday, Aug. 26, 2022, in Las Vegas. (Heidi Fang/Las Vegas Review-Journal) @HeidiFang

Raiders coach Josh McDaniels won and covered his first six games as Broncos coach in 2009. The over is on a 3-1 surge in the series, and the Chargers are on a 6-0 over run. The Raiders are on a 3-5 spread skid away from home. Edge: Over.

The Jaguars lost and failed to cover their final four road games last season. Jacksonville is on a 13-5 under run. Washington is on a 5-0 under surge at home and on a 6-2-1 ATS streak overall. Edge: Commanders and under.

The Bengals have won and covered the past three meetings. The Steelers went 4-4 ATS as a road underdog last season after going 11-3 ATS in that role. Cincinnati is riding an 8-0 cover streak and 5-0 under run. Edge: Bengals and under.

The Patriots have had problems at Miami, even with some of their Super Bowl teams. New England has lost and failed to cover seven of the past nine meetings in Miami. Edge: Dolphins.

The 49ers won and covered at Soldier Field last Halloween and are riding a 20-8 ATS run on the road. The Niners are on a 7-1 under run. The Bears are on a 1-5 ATS skid at home. Edge: Niners.

The Colts won and covered both meetings last season, 31-3 and 31-0. Indianapolis is on a 6-1 cover streak in the series. The Texans went 5-4 ATS at home last season. The past five meetings have gone under. Edge: Colts and under.

The Ravens have won and covered five of their past six openers. The Jets are on a 1-4 spread skid in openers and 12-21 ATS slide overall. Edge: Ravens.

The Saints have won and covered the past four meetings at Atlanta. The Falcons went 0-7 ATS at home last season. Edge: Saints.

The Giants lost and failed to cover seven of their final eight games. New York is on an 18-5 under run. The Titans are on a 5-1 under surge. Tennessee went 6-2 ATS at home last season. Edge: Under.

The Chiefs have won their past seven openers, going 5-2 ATS. But Kansas City is on a 12-19 ATS slide overall. The Chiefs are on a 7-1 over run. The Cardinals have covered their past three openers and are 5-1 ATS as underdogs. But Arizona is on a 2-7 ATS slide at home. Edge: Cardinals and over.

The Buccaneers beat the Cowboys 31-29 in last season’s opener in Tampa. The Bucs went 4-5 ATS on the road last season. Dallas opened 7-0 ATS last season but is 2-4 ATS at home. Edge: Cowboys.

The Broncos are on a 12-5 under run, and the Seahawks are on a 17-8 under run. Russell Wilson returns to Seattle, 4-4 ATS in its past eight home games. Edge: Under.