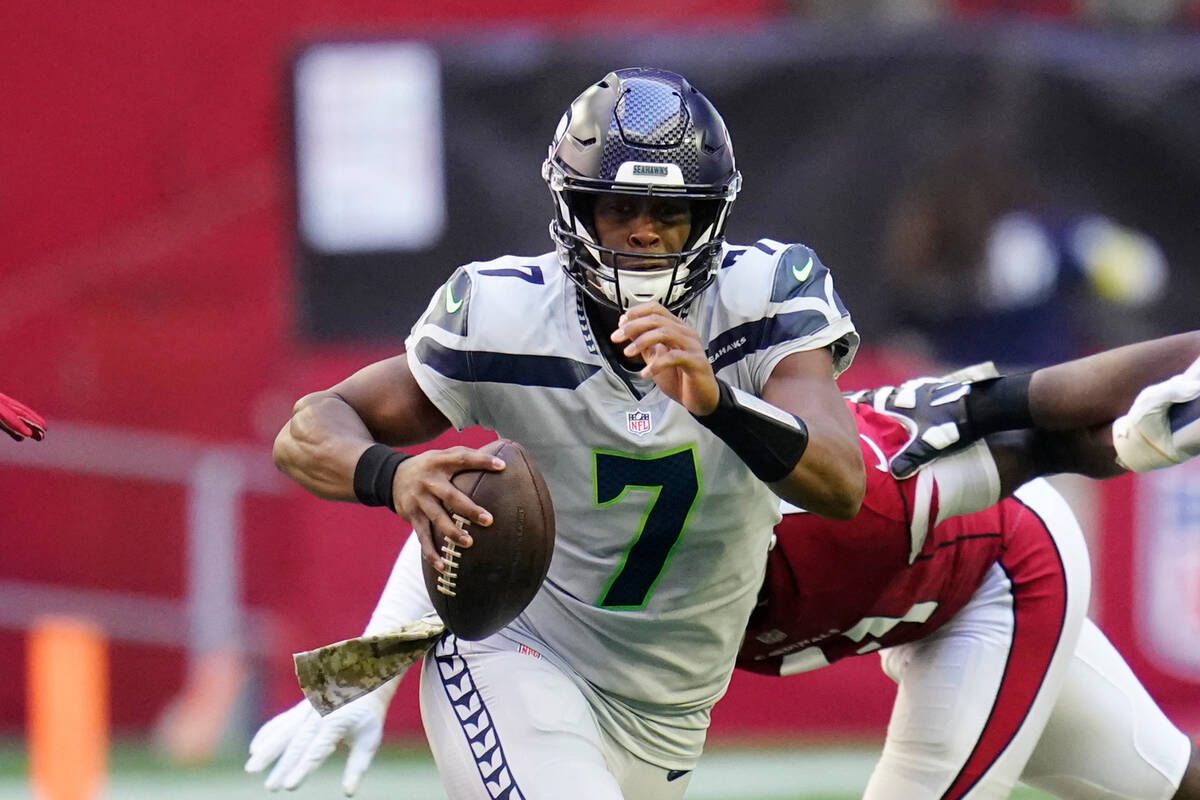 Seattle Seahawks quarterback Geno Smith runs with the ball against the Arizona Cardinals during the first half of an NFL football game, Sunday, Nov. 6, 2022, in Glendale, Ariz. (AP Photo/Ross D. Franklin)

Thirty-five years ago, Bo Jackson rushed for 221 yards, scored three touchdowns and ran over Brian Bosworth to carry the Raiders to a 37-14 rout of the Seahawks on “Monday Night Football.”

Jackson, an otherworldly two-sport star who celebrated his 25th birthday on that memorable Nov. 30, 1987, night, also scored on a 91-yard TD run that he punctuated by disappearing into a dark tunnel.

The Raiders will renew their old division rivalry Sunday in Seattle against the Seahawks, who moved from the AFC West to the NFC West in 2002.

The Seahawks are 4-point favorites. It’s only the third time this season that they have been favored. Seattle was a 1-point favorite over Atlanta in Week 3 and lost 27-23. It was favored by 3½ over the Giants in Week 8 and won 27-13.

In the preseason, when the Raiders had great expectations after they acquired receiver Davante Adams and pass rusher Chandler Jones, they opened as 4½-point favorites over the Seahawks at Station Casinos sportsbooks.

The line has since moved by 8½ points as Seattle (6-4) has surprised and the Raiders (3-7) have disappointed. But that’s too many points.

Throw out the Raiders’ 24-0 loss to the Saints, and they’ve been in every game this season, outlasting the Broncos 22-16 in overtime last week.

Derek Carr is 12-7 against the spread in his last 19 games as a road underdog. Take the Raiders and the points in what should be another close contest.

COMMANDERS (-4) over Falcons: Washington is suddenly in the playoff race after winning five of six games while going 5-0-1 ATS. I like two-time NFL Coach of the Year Ron Rivera and plucky backup quarterback Taylor Heinicke, and the Commanders have one of the league’s best defenses. Pass rusher Chase Young is questionable to make his season debut for Washington, while tight end Kyle Pitts is out for the Falcons, who snapped an 0-4 ATS skid in last week’s 27-24 win over the Bears.

Chargers (-3) over CARDINALS: The Chargers have covered three straight games and excel away from home, where they’re the NFL’s only unbeaten team ATS (5-0). Arizona has lost nine of its last 10 home games, including four of five this season. The Cardinals are working on a short week after getting crushed by the 49ers 38-10 on Monday night in Mexico City.

Packers (+6½) over EAGLES: Green Bay is well-rested and in desperation mode after falling to 4-7 following a Nov. 17 loss to Tennessee at Lambeau Field on “Thursday Night Football.” Philadelphia has failed to cover its last three games, including a 32-21 home loss to Washington in Week 10 that spoiled its perfect season. The Eagles were fortunate to beat the Colts 17-16 last week in a comeback win. The Packers are 12-3 ATS as underdogs under coach Matt LaFleur, including 7-1 since the start of last season.

COLTS (-2½) over Steelers: Jeff Saturday has covered his first two games as Indianapolis coach and will try to make it three in a row Monday night. The Colts will try to bounce back from Sunday’s 17-16 home loss to the Eagles in which they blew a 13-3 fourth-quarter lead. Indianapolis ranks fourth in total defense and 11th in scoring defense, allowing 20.0 points per game. Pittsburgh has lost three of its last four games.