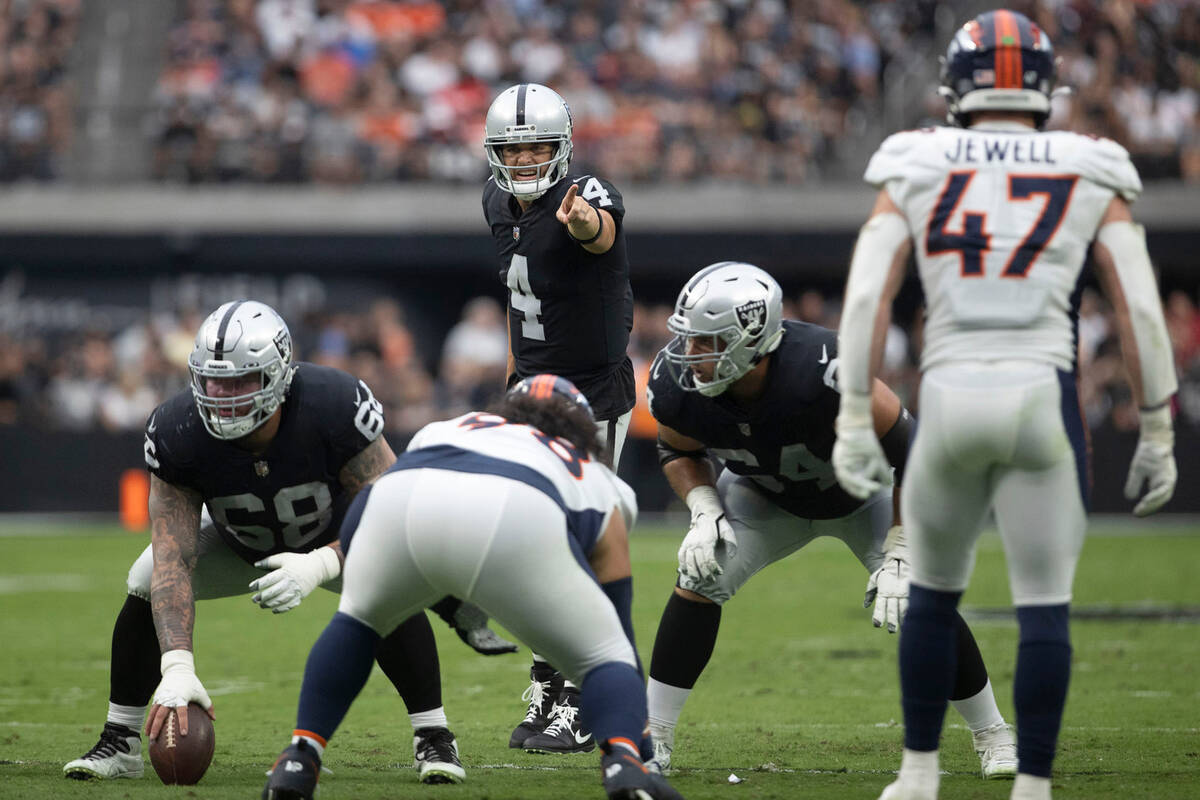 ■ Raiders at Denver (-2½, 41½): The Raiders have bullied the Broncos lately, winning seven of the past eight meetings while going 6-2 ATS. Though the Raiders are only 2-8 straight-up in their past 10 games and 3-7 ATS, they beat Denver 32-23 in the first meeting. That was the only Broncos game to go over this season. Denver has an 8-1 under record this season and is on a 20-6 under run overall. Edge: Under and Raiders.

■ Chicago at Atlanta (-3, 49): The Bears have not had the same result ATS in consecutive weeks this season. They lost last week to the Lions. Chicago is on a 4-0 over run. The Falcons are on an 0-4 spread skid. Edge: Bears and over.

■ New York Jets at New England (-3½, 38): The Patriots have won 13 straight games over the Jets and have covered eight of the past 10 meetings. New York has won and covered five of its past six games, with the lone loss to New England. The Jets are on a 4-0 under run. Edge: Patriots and under.

■ Carolina at Baltimore (-13, 41½): The Panthers are 2-3 straight-up and 3-2 ATS under coach Steve Wilks after going 3-16 straight-up and ATS in their past 19 games under Matt Rhule. Carolina is on a 1-7 spread slide on the road. The Ravens have won three straight and covered their past two, though they’re on an 0-3-1 ATS skid at home. Baltimore is on a 5-1 under uptick. Edge: Ravens and under.

■ Dallas (-1½, 48½) at Minnesota: The Cowboys had won and covered six of seven games before last week’s loss at Green Bay. Dallas has won and covered games against the Vikings in each of the past two seasons. Minnesota is 8-1 straight-up and riding a 7-1 over streak at home. Edge: Over.

■ Cincinnati (-4, 41) at Pittsburgh: The Steelers beat the Bengals 23-20 in overtime in the season opener at Cincinnati, which had won and covered the previous three meetings. Pittsburgh is on an 18-9 cover streak as an underdog and has covered three of its past four this season. The Steelers are also on an 8-3 under surge. The Bengals are riding ATS streaks of 6-1 and 14-3. They’re also on a 10-3 under run. Edge: Under and Bengals.

■ Kansas City (-5, 52) at Los Angeles Chargers: The road team has covered the past four meetings. The Chargers have covered four of the past five meetings, including a 27-24 loss in Week 2 at Kansas City. The past four meetings have gone over. L.A. is on an 0-3 ATS skid at home. The Chiefs are 3-1 straight-up and ATS on the road. Edge: Chiefs and over.

■ San Francisco (-8, 43½) vs. Arizona (Mexico City): The teams split the season series the past two years. The past four meetings have gone under. The Cardinals are 11-3 straight-up in their past 14 games away from home. Edge: Under.