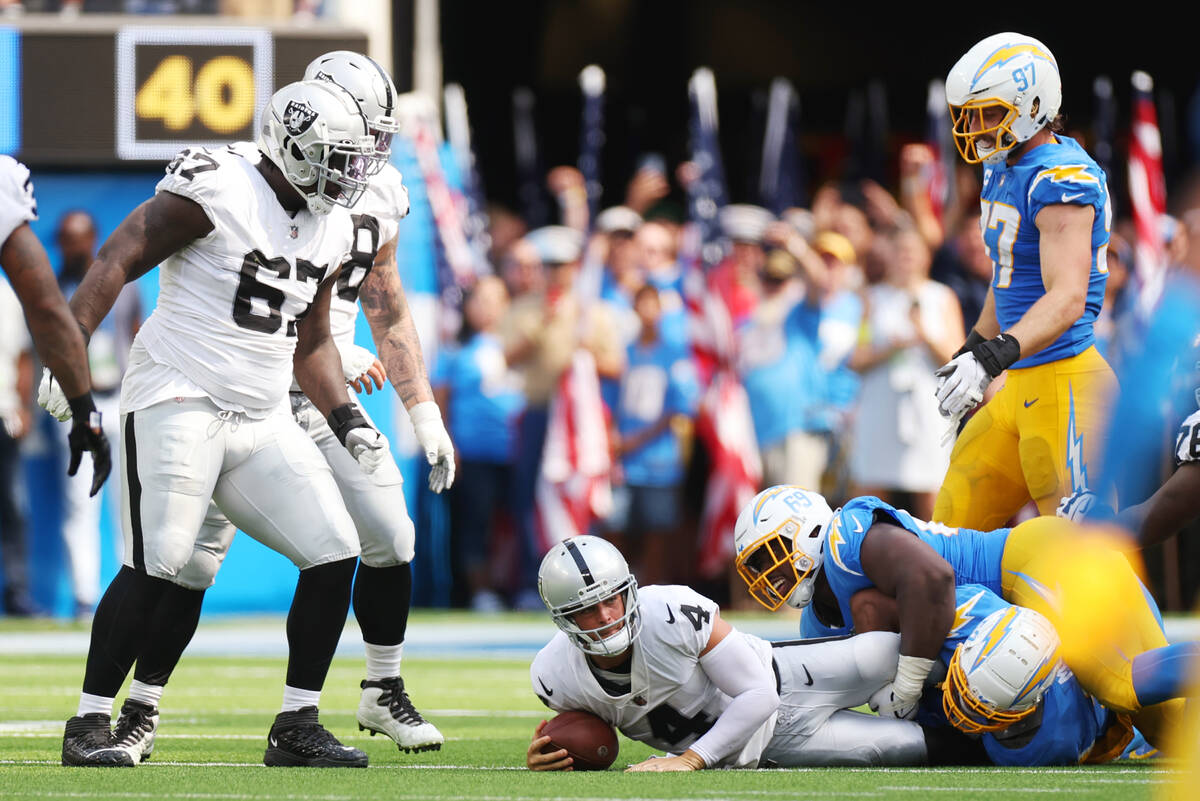 Los Angeles Chargers at Raiders (Pick, 50½): The Chargers have won and covered three of the past four meetings, including a 24-19 win in Week 1, and have covered the past two seasons at Allegiant Stadium. The Raiders are riding a 4-0-1 over streak at home. Los Angeles saw its five-game cover streak on the road end in last week’s 25-24 win at Arizona as a 2½-point favorite. Edge: Chargers.

Tennessee at Philadelphia (-4½, 44½): The Titans had covered eight straight before last week’s loss to Cincinnati. Tennessee has covered its past five road games and is on a 7-1 under run. The Eagles snapped an 0-3 spread skid before covering in Sunday’s win over the Packers. Philadelphia is on a 5-1 over uptick. Edge: Titans.

New York Jets at Minnesota (-3, 44½): The Jets won and covered their first four away games this season until losing at New England on a last-second punt return. New York went under in five straight before going over in Sunday’s 31-10 win over Chicago. The Jets are 5-3 ATS as underdogs. The Vikings are 2-3 ATS at home. Edge: Jets and under.

Seattle (-7, 41) at Los Angeles Rams: The Rams have covered the past three meetings and six of seven. But they’re 2-8 ATS this season and on a 1-6 spread slide at home. The Seahawks have lost and failed to cover two straight. Edge: Seahawks.

Kansas City (-2, 53) at Cincinnati: The Bengals won and covered both meetings as underdogs last season, including the AFC title game. Cincinnati is on a 16-3 ATS uptick and an 11-4-1 under run. The Chiefs are 2-2 ATS on the road. Edge: Bengals and under.

Indianapolis at Dallas (-10½, 44½): The Colts are 2-4 ATS away from home and on a 14-3 under run. The Cowboys had covered four straight at home before the Giants rallied for a backdoor cover on Thanksgiving. Edge: Under and Cowboys.