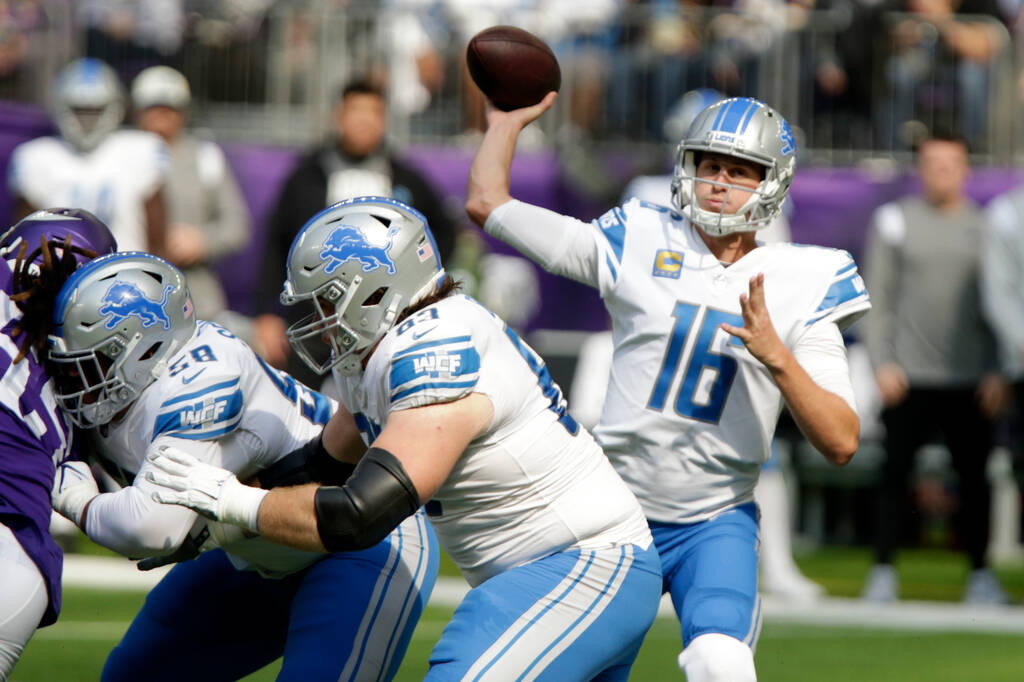 Detroit Lions quarterback Jared Goff (16) throws a pass during the first half of an NFL football game against the Minnesota Vikings, Sunday, Sept. 25, 2022, in Minneapolis. (AP Photo/Andy Clayton-King)

Minnesota at Detroit (-2, 52): The Lions have covered the last four meetings and are on a 6-0 spread surge overall. Detroit is 19-9 ATS under coach Dan Campbell. The Lions are on a 10-4 over run. Edge: Lions and over.

Baltimore at Pittsburgh (-2, 36½): The last three meetings have gone under. The Steelers covered both meetings last season. The Ravens are riding a 10-4 under run and the Steelers are on a 10-6 under run. Edge: Under and Steelers.

Jacksonville at Tennessee (-3½, 41): The Titans have won the last five meetings while going 4-1 ATS. The Jaguars are on an 0-4 spread skid on the road and a 2-7 ATS slide overall. Tennessee is on a 9-1 under run at home. Edge: Titans and under.

New York Jets at Buffalo (-10, 43): The Jets won and covered the first meeting Nov. 6 in a 20-17 victory at home. The Bills have covered two of their last three games. Buffalo has a 9-3 under record this season. Edge: Under and Jets.

Cleveland at Cincinnati (-5½, 46½): The Browns crushed the Bengals 32-13 at home on Halloween on “Monday Night Football.” But that’s the last game the Bengals have lost this season, going 4-0 straight up and ATS since. Cleveland has won the last five meetings and eight of nine. But Cincinnati is 9-3 ATS this season and on a 17-3 ATS surge overall. The Bengals also are on an 11-5-1 under run. Edge: Bengals.

Kansas City (-9½, 43½) at Denver: The Chiefs have won 13 straight meetings. Though the Broncos have covered two of the last three meetings. Denver has an 11-1 under record this season and is on a 23-6 under surge overall. Though one of the Kansas City games went over last season. The Chiefs are on a 7-4 under run. Edge: Under and Chiefs.

Carolina at Seattle (-3½, 44): The Panthers have covered their last two games and five of six, and are 5-2 ATS under interim coach Steve Wilks. Carolina is on under streaks of 3-0 and 8-4. The Seahawks are on an 0-3 ATS skid. Edge: Panthers and under.

New England (-1½, 43½) at Arizona, Monday: The Patriots had covered three straight this season prior to back-to-back losses, straight up and ATS, to the Vikings and Bills. New England is still on a 3-1-1 cover run away from home. The Cardinals have lost 11 of their last 12 home games. Arizona is on a 5-0-1 over surge. Edge: Patriots and over.