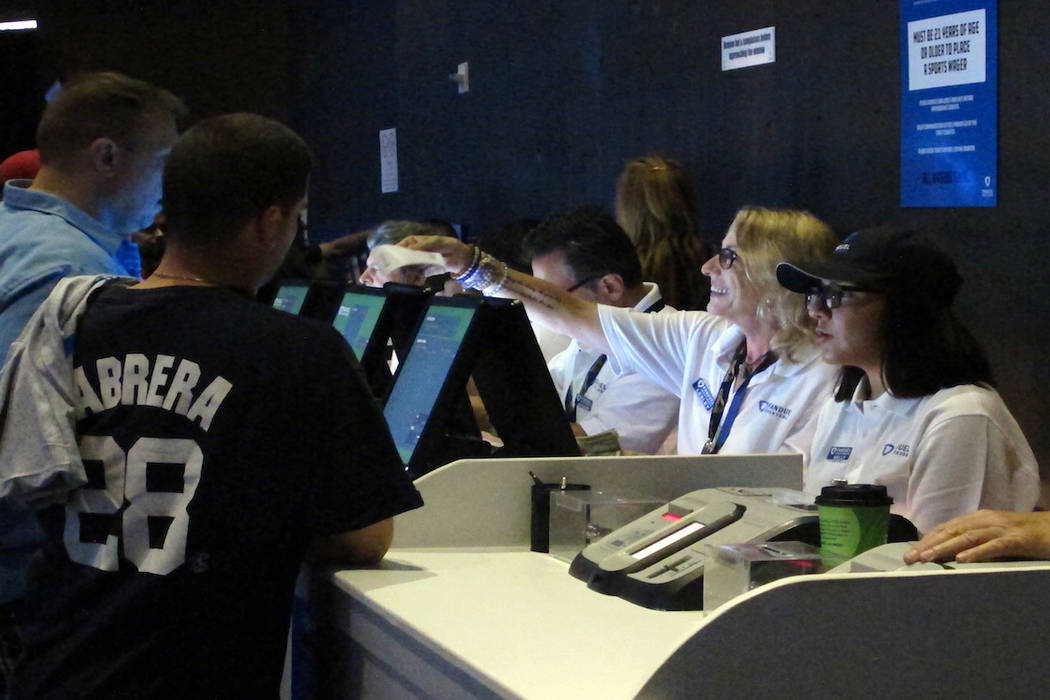 A clerk hands a sports betting ticket to a gambler at the Meadowlands Racetrack in East Rutherford, N.J., minutes after it started accepting sports bets, July 14, 2018. (Wayne Parry/AP)

ATLANTIC CITY, N.J. — New Jersey gambling regulators are investigating whether FanDuel’s sports book should pay out more than $82,000 to a man who was given exorbitant odds for the Denver Broncos to win Sunday against the Oakland Raiders.

Anthony Prince of Newark made his bet and was handed a ticket at incredible 750-1 odds with about a minute left in the game, as the Broncos trailed by 2 points on their final drive. Denver kicked a field goal with 6 seconds left to win 20-19, capping a second half comeback that started with the Broncos down 12-0.

FanDuel says its system should have calculated his odds at 1-6, meaning a bettor would have to wager $600 in order to win $100.

Prince bet $110 on the Broncos but was stopped when he went to collect from FanDuel’s betting window at the Meadowlands Racetrack in East Rutherford, New Jersey.

“They said, ‘Oh, we can’t honor this ticket,’ ” Prince told News12 New Jersey, which first reported the story. “I said, ‘Why? This is fair and square.’ They said the system had a glitch in it and they’re not obligated to pay for glitches.”

FanDuel said in a statement that its system malfunctioned and it is not obligated to pay out on an obvious error.

“A small number of bets were made at the erroneous price over an 18 second period. We honored all such bets on the Broncos to win the game at the accurate market price in accordance with our house rules and industry practice, which specifically address such obvious pricing errors,” FanDuel said in its statement. “We have reached out to all impacted customers and apologized for the error.”

How the matter is handled could have far-reaching effects on the budding sports betting industry in New Jersey at a time when new sports books are opening in some other states and lawmakers throughout the country consider whether to also jump in for the potential tax revenue. New Jersey challenged a federal ban and won a U.S. Supreme Court decision in May that cleared the way for gambling on games to expand beyond Nevada.

The idea that player money and winnings would be protected and regulated by the state has been a major selling point among sports betting supporters who contrasted legal gambling with shady offshore betting sites where players often have little recourse in disputes.

But gambling regulators also have policies in place to void obvious errors in sports bets.

David Rebuck, director of the New Jersey Division of Gaming Enforcement, said the agency is investigating whether there are grounds to compel FanDuel to pay Prince the stated payout of $82,000. He added the agency is looking “just as importantly (at) how it occurred given internal controls exist to prevent such an error. Those findings might also result in the need for further action.”

FanDuel’s operation just a few miles from New York made $3 million in its first full month in August and quickly became the most popular sports book in New Jersey.

FanDuel declined to say how many bets were made at the incorrect odds.

Prince said FanDuel offered him $500 and some tickets to future New York Giants games, adding he should take the offer because they’re not obligated to give him anything.

“I said, ‘Wow, for real?’ ” Prince said. “You’d rather go to the corner bookies now; you’re not getting paid here.”