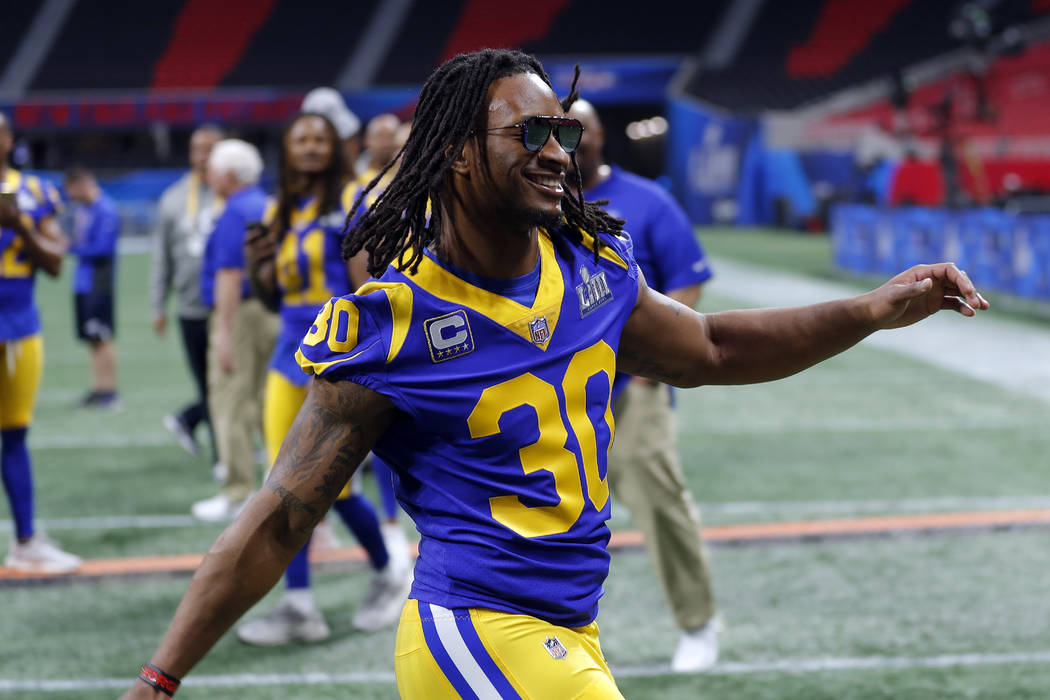 Los Angeles Rams running back Todd Gurley (30) rushes to join teammates for a photograph during walkthrough at the Mercedes Benz Stadium for the NFL Super Bowl 53 football game against the New England Patriots, Saturday, Feb. 2, 2019, in Atlanta. (AP Photo/John Bazemore)

The New England Patriots are 2½-point favorites over the Los Angeles Rams in Super Bowl LIII, and the total is 56½. A survey of opinions from Review-Journal staff members, other media, oddsmakers and professional bettors and handicappers:

Tom Brady seems extra motivated, and that’s always a bad sign to Patriots opponents. All Patriots Super Bowls are close, and they catch the Steelers for most Lombardi Trophies.

Brady and company are on a crusade to prove the doubters wrong. As long as Bill Belichick doesn’t bench his best defensive players, they should find a way to get it done, but it won’t be easy against a good Rams team.

It’s two consecutive Super Bowl losses for the Brady Bunch, as boy genius Sean McVay schemes a way to lead the Rams to a come-from-behind victory.

Jared Goff will make too many mistakes in his first appearance on the big stage. Belichick sends wunderkind McVay back to the drawing board.

Expecting an early sparring match, with each team trying to establish ball control. But there will be haymakers galore in the second half, leading to another Super Bowl thriller.

To win the Super Bowl, you must have a seasoned coach and a veteran quarterback. After losing last year’s Super Bowl to a one-hit wonder, expect the “Bill and Tom” show to leave no doubt about their legacy.

The Patriots flicked a switch at the start of the playoffs and are peaking at the perfect time. Belichick will find a way to confuse Goff, and Brady will lead New England to its sixth Super Bowl title exactly 17 years to the day of its first.

With two weeks to prepare, McVay’s offensive creativity and aggressiveness outsmarts the master, Belichick. It all ends where it started with a loss to the Rams. For the first time, the Pats lose back-to-back Super Bowls.

In last year’s Super Bowl, Eagles coach Doug Pedersen lived up to his risk-taking ways to beat the Patriots. As I said before that game, to beat Belichick and Brady, you have to be a risk-taker. McVay doesn’t fear taking risks – going for it on fourth down, etc. – so I’ll go against where most of the money is right now and take the Rams outright.

A system that has done well in the past several Super Bowls is to play the underdog that has the better overall defense. The Rams have the slightly better defense.

The Patriots’ rush defense has been phenomenal in both playoff games, giving up an average of 30 yards, and that will stymie the Rams’ attack. Look for the Patriots to open the game up after having success running the ball. Belichick and Brady prove too much for the young Rams.

Toby Keith said it. Brady lives it. “I ain’t as good as I once was. But I’m as good once as I ever was.” The Pats will run the ball, stop the run and confuse Goff and company with looks he will have nightmares about.

The Rams are the better team. New England is going to have trouble running the ball, and the Rams’ defensive line is going to be all over Brady. L.A.’s offensive line is really strong, and it’s going to make room for Todd Gurley, who will have a big game.

If you think a 41-year-old quarterback all hopped up on gallons of electrolyte-infused water and kale smoothies is going to lose consecutive Super Bowls, well, I’ll bet you two double-doubles and a large fries you’re dead wrong.

Referees keep flags in pocket. Football fans in New Orleans not impressed. Same for ones in St. Louis.

The Rams will give the Patriots many different looks on both sides of the ball. I also expect the Rams to win the physical battle. The Patriots will get a late touchdown to make it close, but the Rams will control most of the game.

The Rams’ defensive front will make Brady uncomfortable, while the Rams’ running attack opens the door for a big day from Goff.

No matter what the Rams say, Gurley’s knee is not right. They can keep the game close, but they can’t win it if their best player is on the field for only 32 plays and carries the ball four times, as was the case in the NFC championship game.

The Rams run more from the 11 formation than any other team. The Patriots are terrible at stopping the run from that formation. The books were right to open the Rams as the favorite.

The Rams are playing to show the NFL, their fans and the naysayers that they have arrived. The Patriots will hang in this game, but the youth and talent on both sides of the ball will prove to be too much.

Credit the Rams’ resilience and staff, but the Patriots are adaptable to game situations and are also the best-coached team Los Angeles has faced. Also, New England is in a familiar setting. One more for “Father & Son Time.”

Not a default recommendation on Brady-Belichick, rather acknowledgement that the Patriots have picked the right time to play their best football of the season in the past month. The parts always have seemed greater than the sum of this Rams defense, and Goff’s aerial show has lacked some of its previous bite since the injury to Cooper Kupp.

James White and Gurley have big days receiving out of the backfield. A late Goff interception leads to a Stephen Gostkowski game-winning field goal.

I do not have a strong opinion on the spread, total or straight-up winner. The reason I’m picking the Rams is because they would have been favored over New England in the regular season, so I’ll take the “value.”

I give the edge in talent to the Rams, and as long as McVay stays aggressive, they pull this off. But no field goals from inside the 1-yard line, Sean.

I’ve decided to go with experience over youth. Brady has more playoff wins (29) than any other quarterback has postseason games played. Go against the G.O.A.T. with your money, not mine.

Greg Zuerlein misses an extra point because of a bad snap to the holder, and the Patriots eke out another Super Bowl championship. Nevada bookmakers pay off on the missed extra point prop, but avoid paying off on the overtime prop.

The Belichick-Brady era isn’t over yet. Goff’s inexperience will show, and the Patriots’ dynasty will get their final Super Bowl win.

The Rams have had to hear for two weeks that they only got into this game because of bad officiating. Rams defensive coordinator Wade Phillips has had the answer for Brady in recent years and will have it again.

Underdogs are the way to go in the Super Bowl lately, winning eight of the past 11, and the Rams don’t even deserve to be the underdog.

The Rams have been saving Gurley for this one, which will lead to keeping Brady off the field with ball control.

Opening line was pick, and now it’s Pats -2½. I’m a big proponent of respecting the opening line, especially in the “Big Game.” With that said, the Rams plan on utilizing Gurley more, and Aaron Donald will set the tone early in pressuring Brady.

Brady just threw three interceptions in a playoff game (I know, I know: Dee Ford was offsides on the third), and the Patriots’ defense just allowed 31 points in a half vs. Kansas City. Since his 3-0 start in Super Bowls, Brady has a losing record in the biggest game.

The Rams have been power-rated the higher team the entire season, and they still are. There’s line value with anything plus on the Rams, as the public has inflated this number because of Brady-Belichick familiarity.

This Super Bowl will be remembered not only as the end of an era with the closing of the Brady-Belichick dynasty but also as the start of the Sean McVay era that brought an NFL title to Hollywood.

At the start of the season, bookmakers made the NFC a 1-point favorite over the AFC. Suddenly, the Patriots play a few good games, the Saints get a no call and the Rams are no longer the highest power-rated team? The Rams have to get pressure on Brady, something the Chiefs and Chargers weren’t able to do. Take the better defense plus the points.

To paraphrase Mark Twain, the demise of Belichick and Brady has been greatly exaggerated. Brady and longtime target Rob Gronkowski connect on key pass plays, and fans who love to hate the Patriots are disappointed again.

How could anyone pick against the Patriots? It’s just moronic, said the moron from Jersey. Tyler Higbee with the game-winning touchdown.

The line should be around pick, so the perceived value is on the Rams. It’s hard to bet against Belichick and Brady, but the Rams will find a way to get it done.

Let’s hope this is not another officiating fiasco. This league is too often about the officials, but it’s still mostly about the quarterbacks, and the Brady-led Patriots are 5-3 in Super Bowls with the wins by margins of 3, 3, 3, 4 and 6 points. While the point-spread value is with the Rams at plus 3, it’s tough to bet on Goff beating Brady on this stage.

The team with the lower pass defense percentage usually wins the Super Bowl, but I have to buck that trend. The numbers say this is a pick game, and I’ll take the points.

Against the spread picks: Rams 29, Patriots 14