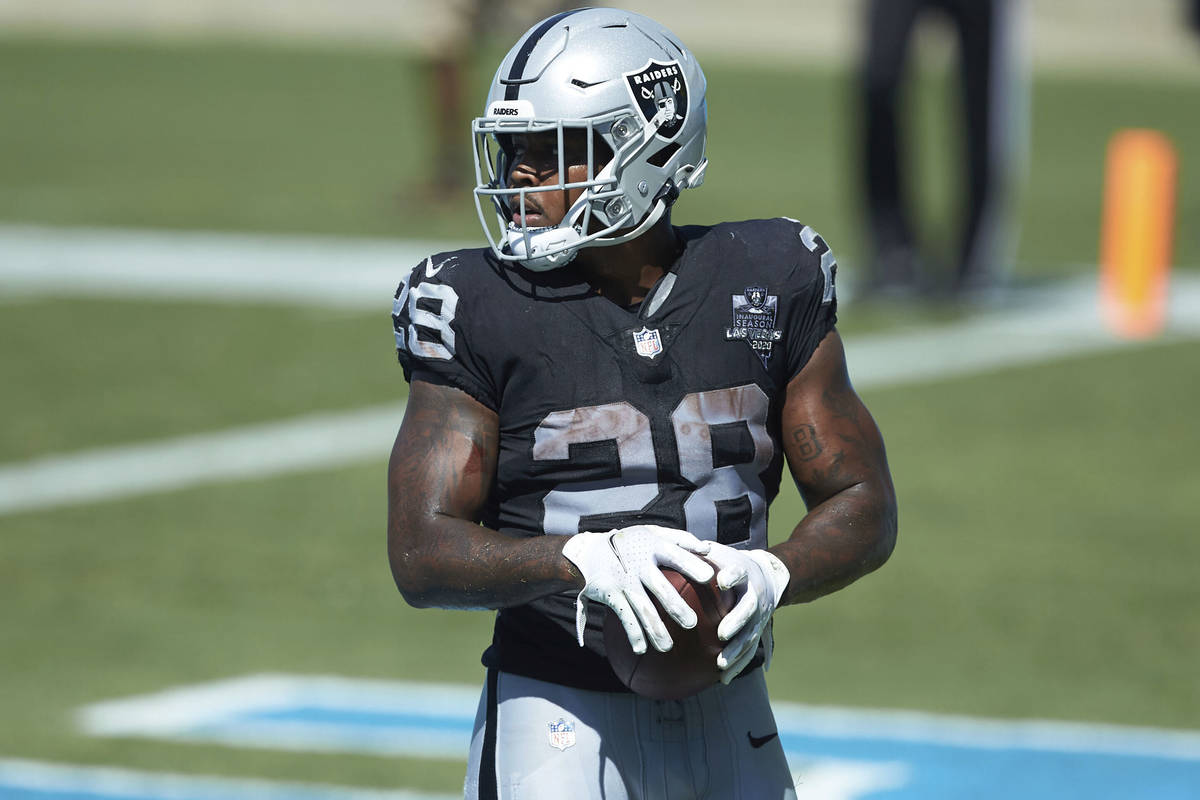 Las Vegas Raiders running back Josh Jacobs (28) stands in the end zone after scoring a touchdown during the second half an NFL football game against the Carolina Panthers, Sunday, Sept. 13, 2020, in Charlotte, N.C. (AP Photo/Brian Westerholt)

Sharp money poured in on the Raiders at Las Vegas sportsbooks Monday morning hours before their inaugural game at Allegiant Stadium against the Saints on “Monday Night Football.”

Bets on the Raiders +5½ caused the consensus line to drop to 4 and to as low as 3½ at the Westgate.

“There’s some group or person out there that likes the Raiders because everybody kind of got hit at the same time,” Circa Sports sportsbook manager Chris Bennett said. “The Raiders were +5½ and pretty much everywhere went to 4 pretty quickly.

“We respect the money coming in on the Raiders. We haven’t really seen any sharp money on the Saints.”

“Heading into the weekend, we needed the Raiders. But we need the Saints now,” Westgate sportsbook vice president Jay Kornegay said. “We had a lot of liability on the Saints because of all the parlays carrying over from Sunday to tonight’s game. However, now that we’ve taken some big plays on the Raiders this morning, it’s fairly balanced.”

There’s also been sharp action on the total, which is at 48½ after opening at 51½.

“We’ve taken some sharp money on the under,” Bennett said. “The respected money is on the Raiders and under.

“As it stands right now, we need the Saints.”

Las Vegas books have posted more props than usual for a Monday night game for the Raiders’ home opener. The most popular prop, in terms of tickets, is the player to score the first touchdown.

The Westgate posted a prop months ago on the NFL player to score the first TD at Allegiant Stadium. Raiders running back Josh Jacobs was the ticket count leader, but rookie receiver Bryan Edwards represents the book’s largest liability. A bettor wagered $700 to win $21,000 on Edwards to score the first TD. He had one catch in Las Vegas’ 34-30 season-opening win at Carolina.

The Westgate reposted a prop on the player to score the first TD in Monday’s game. Jacobs is the +450 favorite after scoring three TDs in the opener.

New Orleans running back Alvin Kamara is the 6-1 second choice. The rest of the players are in double digits. No TD scored is 500-1 and the largest liability at the Westgate.

“It’s such a historic day for Las Vegas,” Kornegay said. “This 2020 pandemic is kind of canceling that out. But just looking at the action and ticket count, I think the excitement is ahead of the pandemic.”