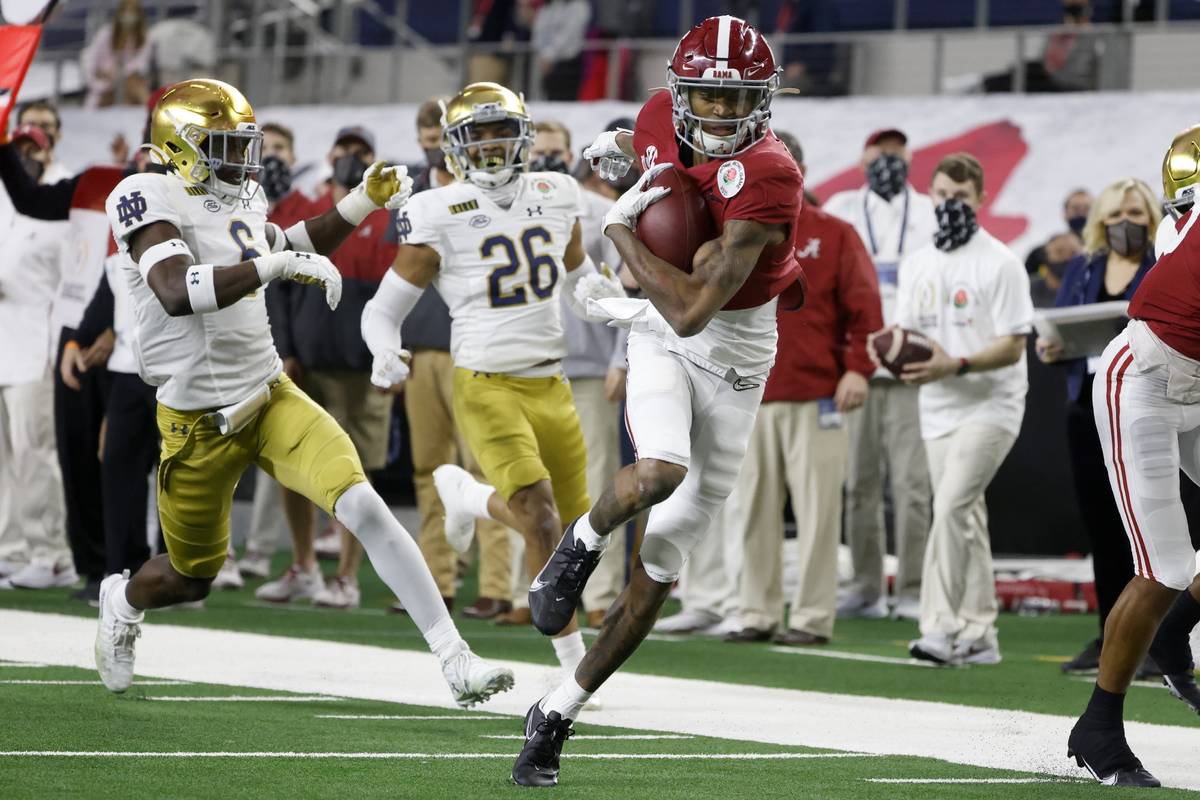 Alabama wide receiver DeVonta Smith (6) gets past Notre Dame linebacker Jeremiah Owusu-Koramoah (6) and cornerback Clarence Lewis (26) on his way to the end zone for a touchdown in the first half of the Rose Bowl NCAA college football game in Arlington, Texas, Friday, Jan. 1, 2021. (AP Photo/Michael Ainsworth)

Sharp action on Alabama has moved the Crimson Tide to consensus 8-point favorites over Ohio State in the College Football Playoff national title game after the line opened at 7 on Friday night.

Alabama was -11 over Ohio State on the look-ahead line at William Hill on a potential championship matchup. But the book lowered the spread by four points after the Buckeyes’ 49-28 blowout win over Clemson on Friday night in the CFP semifinals.

The Westgate opened the line at 7½ for the Jan. 11 game in Miami. It was bet down to 7 before going back up to 7½ on Friday night and then to 8 on Saturday.

“I think some people laid 7 thinking if he’s hurt or limited, they’ve got a really good bet,” he said.

The Tide beat Notre Dame 31-14 in Friday’s first semifinal but didn’t cover the 19½-point spread, the largest in CFP history.

The consensus total for Alabama-Ohio State is 76, a record high for a CFP title game.

The total opened at 76½ at the Westgate before sharp action on the under caused it to dip to 75½.

“Sharps always bet the big totals under. Always,” Salmons said. “We knew when we put up a big number they would bet it under. But the public is going to overwhelm them and bet the over.”

“I think we’ll need the exact same thing as pretty much any big game,” Bogdanovich said. “The favorite not to cover, the favorite to win the game and to go under. It’s going to be fun to book.”