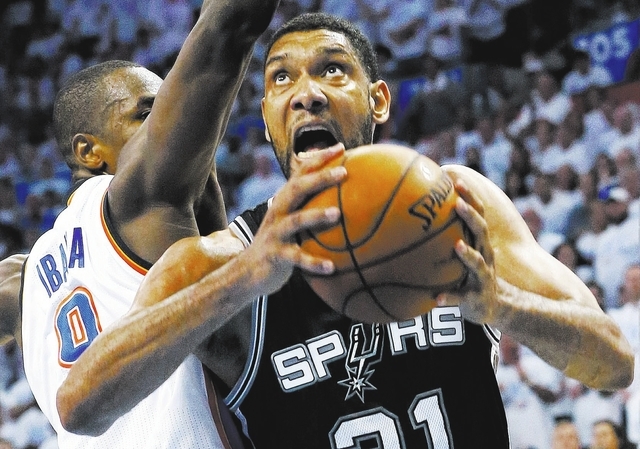 Pundits have sounded the death knell for the San Antonio Spurs for years, but coach Gregg Popovich and his core trio continues to prove them wrong.

An encore of the NBA Finals from last year tips off when the Miami Heat visit the Spurs tonight. Now, the underdog Heat are out to prove oddsmakers wrong.

Last season, Miami, the No. 1 seed from the Eastern Conference, trailed 3-2 in the series to the West’s No. 2 seed, and the Spurs appeared to have won Game 6 before a miraculous final-minute Heat comeback forced overtime and an eventual Game 7. A back-and-forth seventh game ended with a seven-point Miami win behind red-hot Shane Battier, who shot 6 of 8 from 3-point range.

This time, Miami is the No. 2 seed from the East, and San Antonio claimed the West’s top seed and home-court advantage. The location of where the games are played this year has changed from the 2-3-2 format to the conventional 2-2-1-1-1 early-round structure. Even with the three straight road games, the team with home-court advantage had a series record of 20-9 in the old format that started in 1985.

So, what is different in each team this season as compared to last? The key personnel for both teams remains almost intact with a few minor exceptions. The supporting players have improved for San Antonio, with Miami experiencing a small decline.

For the Heat, Battier’s game has dropped considerably, and this is probably his final season in the NBA. Miami does miss departed sharpshooter Mike Miller. Norris Cole’s game has improved marginally, but the guard did step up in the East finals against Indiana, especially defensively.

I doubt Michael Beasley, a defensive liability, will be used except in an emergency case, and center Greg Oden appears destined to remain on the bench. However, in the two regular-season matchups, each easily won wire to wire by the home team, Oden played some.

In a playoff series, the player who appears to be the hero leading his team to victory can quickly become the goat. Last year in the Finals, the Spurs’ Danny Green tallied double-digit points in each of the first five games, hitting on 25 of 38 3-pointers (65.8 percent). With San Antonio trying to close out the series in Games 6 and 7, Green made 2 of 11 from behind the arc. Another season of experience has helped him, as well as backup point guard Patty Mills.

The Spurs added Marco Belinelli, who is shooting 43 percent on 3-pointers. Kawhi Leonard continues to elevate his game on both ends and appears to be headed to All-Star status.

A team’s average margin of victory is a telling stat, especially in sports with a fair amount of games for a large sample size. Miami’s margin of victory fell from 7.9 points per game last year to 4.8 this season, and the Spurs’ number improved to 7.8 compared with 6.4.

The Spurs played the more difficult schedule in the Western Conference as compared to Miami playing in the East. The Spurs were 24-6 straight-up against East opponents, and Miami finished 20-10 against the West.

Statistics are meaningful, but matchups have a great influence over statistics. If advantages can be significantly diminished or neutralized through individual and team matchups, metrics then are nothing more than numbers.

I expect Miami to play small-ball to reduce the advantage of San Antonio’s inside presence by keeping Tiago Splitter on the bench and eliminating the Spurs’ twin towers with Tim Duncan. The Heat went small in the East finals, playing a seldom-used Rashard Lewis as a stretch power forward, and even had three guards playing with LeBron James and Chris Bosh at times. The advantage then went to the Heat’s 3-point specialist, Ray Allen, who was defended by Pacers power forward David West.

Duncan has a definite advantage with Bosh or Chris Andersen possibly fronting him frequently on defense. Leonard is a good defender who will be on James more than anyone else. Boris Diaw gives the Spurs the ability to go small with the Heat while also presenting an outside threat, hitting 40.2 percent on 3-pointers, and Diaw is an excellent passer.

The Spurs are not strong on the offensive glass, but the Heat are even worse, finishing next-to-last in the league in offensive rebounding. Their numbers are even lower in the playoffs.

Miami does play a good trapping defense, especially against pick-and-roll plays. However, that can leave the Heat exposed on the perimeter to a team that has fluid ball movement, such as the Spurs. With San Antonio leading the league in 3-point shooting and having four players hitting over 40 percent from long range, that could be a problem for Miami.

Popovich knows how to manage his team of aging veterans, young up-and-comers and role players like no other coach. Playing multiple starting lineups, restricting minutes played and giving veterans days off should be considered the NBA’s Fountain of Youth. That’s part of the reason Popovich’s core players — Duncan, Tony Parker and Manu Ginobili — continue to prove the pundits wrong.

While Popovich is widely considered the league’s best coach, Eric Spoelstra has done an impressive job of making adjustments for the Heat in the playoffs in recent years. I don’t consider there to be a quantum coaching advantage for the Spurs, as some people portray it.

If appears it could be an advantage for Miami in Game 1 having one more day of rest than San Antonio before this series starts, but teams in that position since 2003, when starting a new series after the opening round, are 2-11 straight-up and against the spread. Obviously, it is too small of a sample to put much weight into, but bettors can find interest in virtually anything they believe will give them an advantage.

The advantage of who is going to win the series goes to San Antonio, assuming Parker (ankle) and other key players stay healthy. An argument can be made to support either side, but I like the depth of the Spurs and their ability to score inside and out.

San Antonio is my pick to win the series in seven games.

Jim Kruger is a handicapper for VegasSportsAuthority.com.