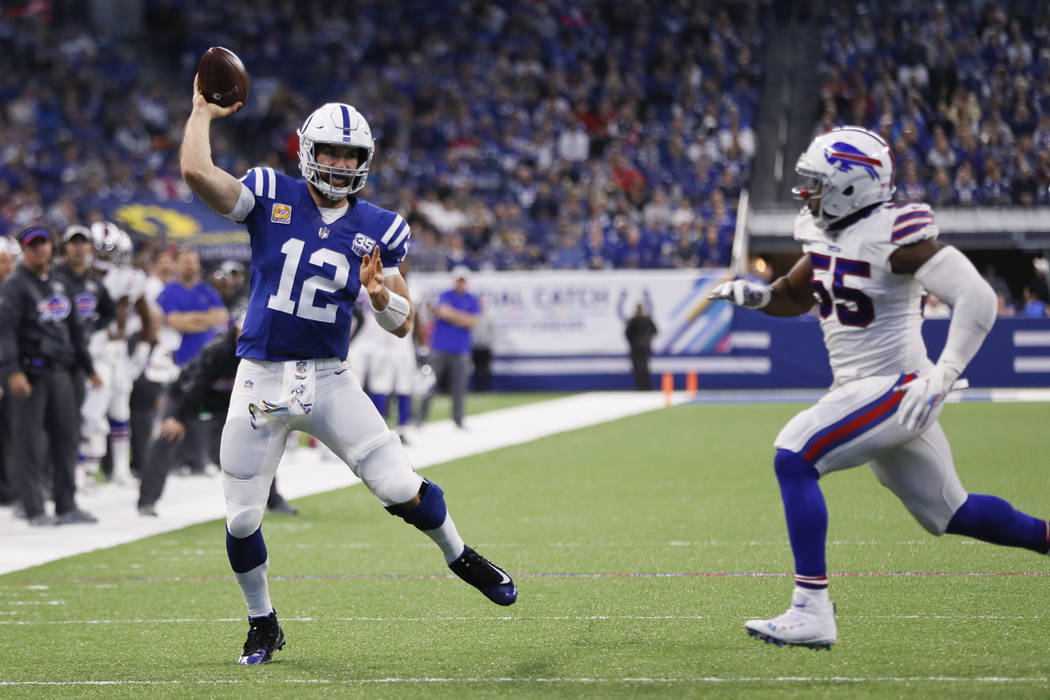 Indianapolis Colts quarterback Andrew Luck (12) throws a pass for a touchdown in front of Buffalo Bills defensive end Jerry Hughes (55) during the first half of an NFL football game in Indianapolis, Sunday, Oct. 21, 2018. (AP Photo/John Minchillo) 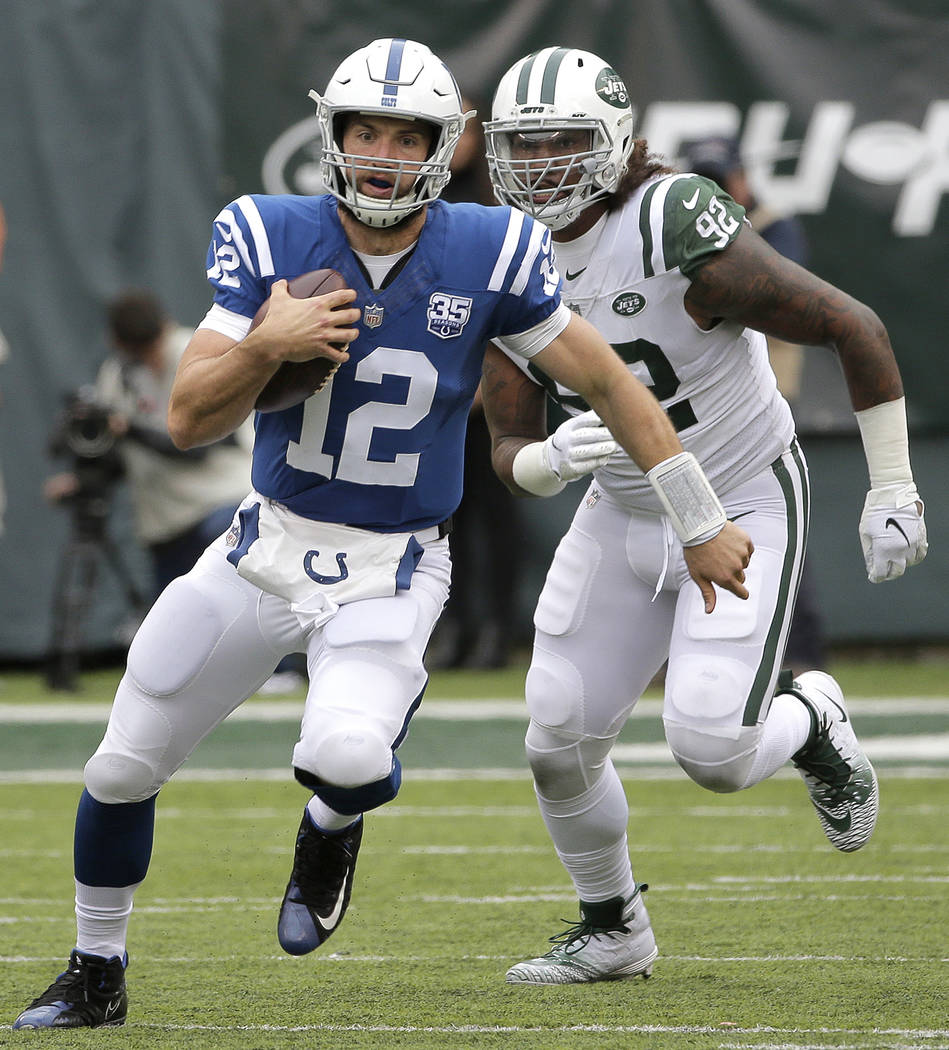 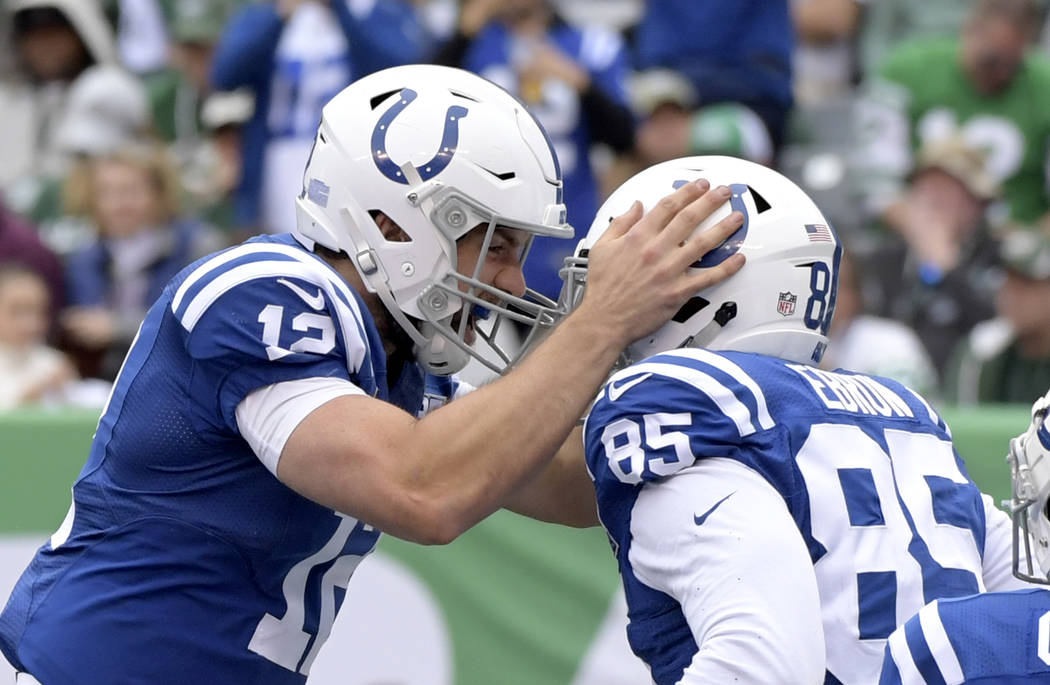 Indianapolis Colts quarterback Andrew Luck, left, celebrates after he and tight end Eric Ebron, right, connected for a touchdown pass and catch during the second half of an NFL football game against the New York Jets, Sunday, Oct. 14, 2018, in East Rutherford, N.J. (AP Photo/Bill Kostroun) 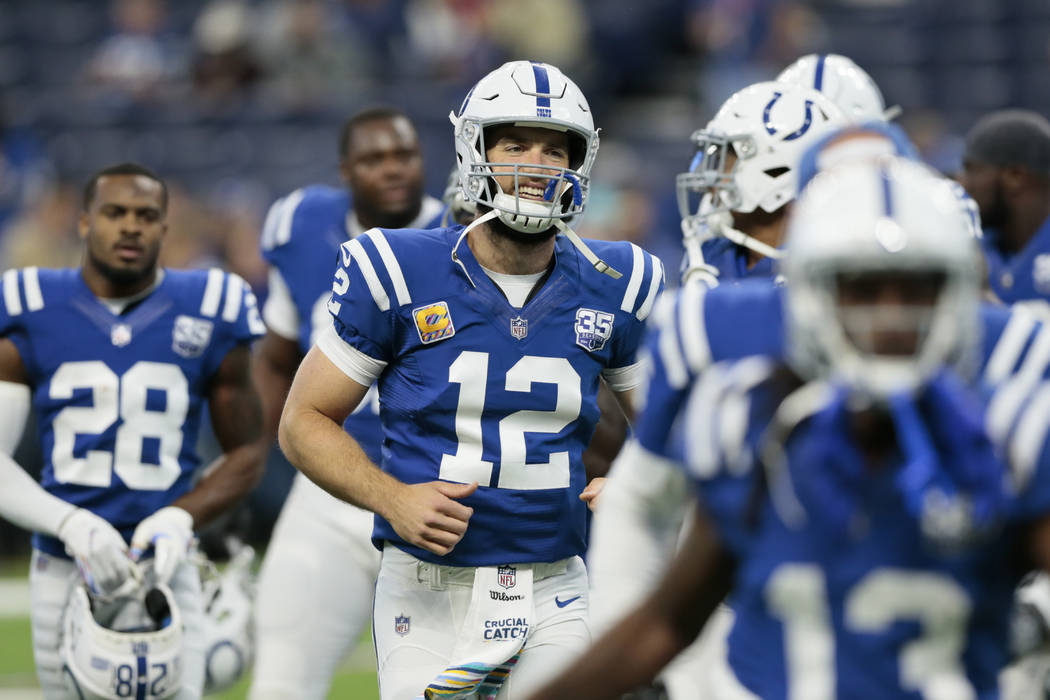 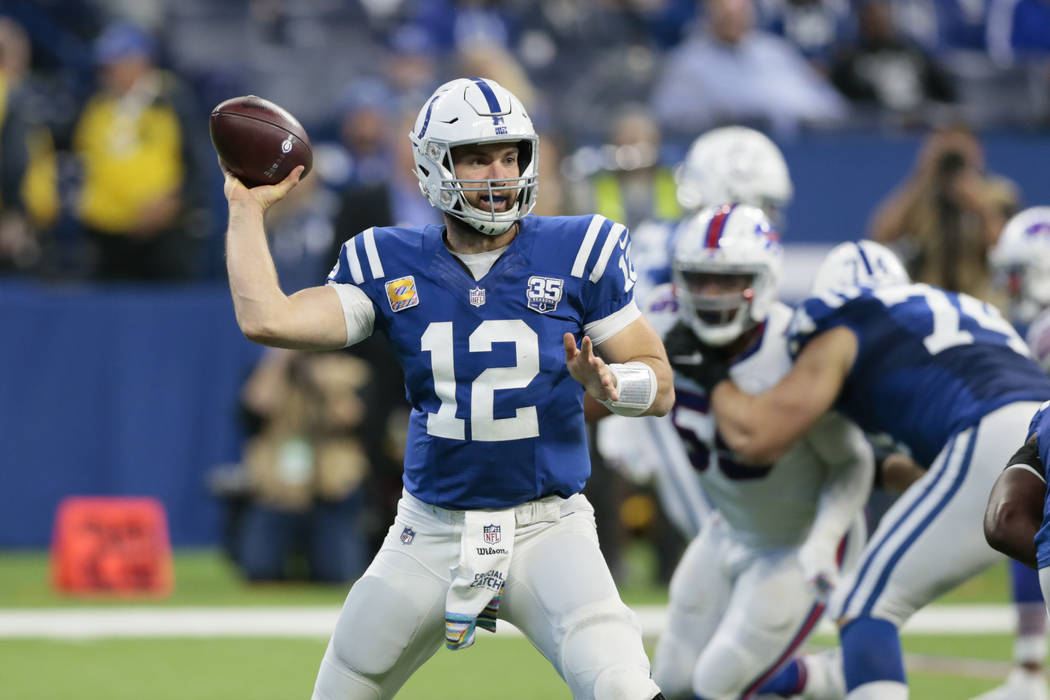 Indianapolis Colts quarterback Andrew Luck (12) throws against the Buffalo Bills during the second half of an NFL football game in Indianapolis, Sunday, Oct. 21, 2018. (AP Photo/AJ Mast) 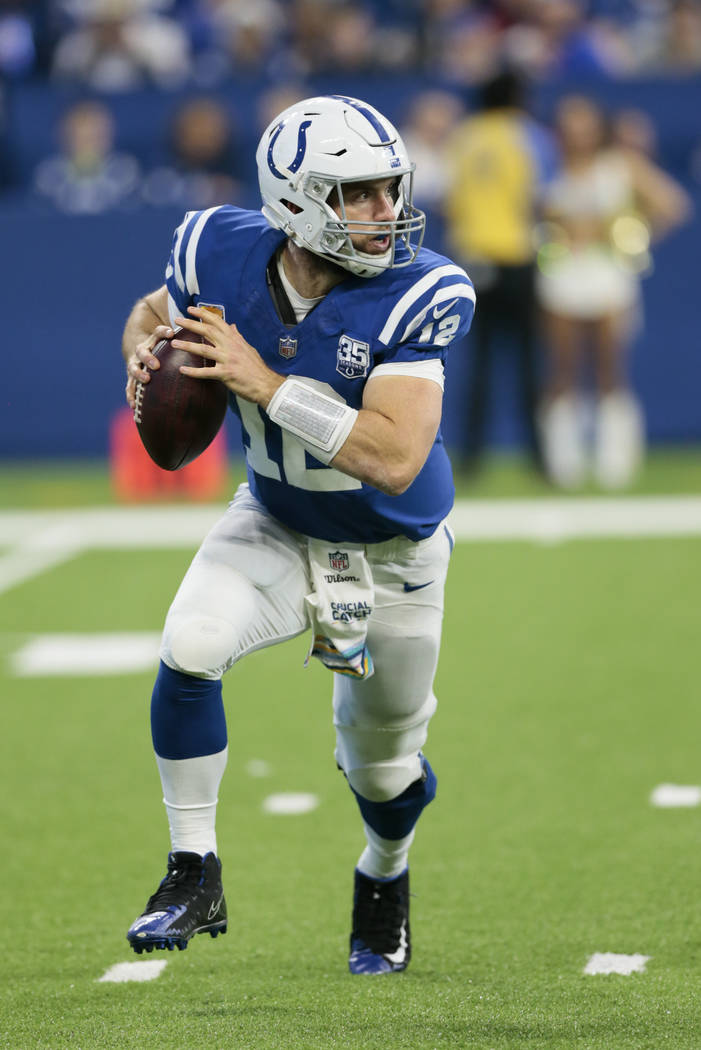 Indianapolis Colts quarterback Andrew Luck (12) throws against the Buffalo Bills during the second half of an NFL football game in Indianapolis, Sunday, Oct. 21, 2018. (AP Photo/AJ Mast)

As the Colts prepared for Sunday’s game in Oakland, Capt. Andrew Luck updated their progress in a letter to his mother:

I have received your care package of antler bread and fresh Squirrel Oil. We continue our march to the Land of Oak. Scouts report the area is vast, but empty. The ground itself black, riddled with bones. The sea — silver in color. Most disturbing.

That was the most recent post on the popular @CaptAndrewLuck parody Twitter account, which has 343,000 followers and imagines the Colts quarterback as a Civil War soldier writing home to his mother.

The Raiders have become a parody of their former Super Bowl champion selves. They’re 1-5 under coach Jon Gruden and somehow managed to suffer two more key losses during their bye week, as running back Marshawn Lynch was placed on injured reserve and receiver Amari Cooper was traded to the Cowboys.

Dearest mother —
I have received your care package of antler bread and fresh Squirrel Oil. We continue our march to the Land of Oak. Scouts report the area is vast, but empty. The ground itself black, riddled with bones. The sea — silver in color. Most disturbing.
— Andrew

Indianapolis is on the upswing after a 37-5 win over the Bills in which wideout T.Y. Hilton returned from an injury to catch two of Luck’s four TD passes. Luck has returned to form this season, passing for 20 TDs, second in the NFL to the 22 thrown by the Chiefs’ Patrick Mahomes.

Oakland QB Derek Carr has struggled under Gruden, with more interceptions (eight) than TDs (seven). He was sacked six times by Seattle in a 27-3 loss in London before the bye and now faces an Indianapolis defense ranked fourth in the NFL in sacks (21).

The Raiders are 28th in scoring (18.3 ppg), 29th in scoring defense (29.3) and clearly cleaning house for their impending move to Las Vegas.

The Colts should cover as 3-point favorites and ease the mind of Capt. Luck’s mother, who probably still is scarred from this letter before their 2016 battle:

“Dearest mother — Silver and black painted ruffians donning skulls and bones await our unit. They shall not loot my neck beard. — Andrew”

Eagles (-3) over Jaguars: Defending Super Bowl champion Philadelphia and last year’s AFC runner-up, Jacksonville, have struggled this season entering the unofficial Hangover Bowl in London. But the Jaguars have been worse, losing their last three games by a combined score of 90-28, capped by a 20-7 home loss to the Texans in which QB Blake Bortles was benched. Carson Wentz is making strides in his return from a torn ACL. He’s fourth in the NFL in completion percentage (70.8) and has thrown for 10 TDs against one interception. The Eagles rank second in rushing defense and sixth in scoring defense and should shut down the Jaguars, who are 29th in scoring (16.6 ppg).

PANTHERS (+3) over Ravens: Carolina has won eight consecutive home games and six straight against AFC teams, and the Ravens have lost seven of their last 10 against the NFC. Baltimore still has the league’s top scoring defense after its 24-23 loss to the Saints, but the Panthers also feature a stout defense that ranks eighth against the run and 10th in scoring (21.8 ppg). QB Cam Newton has played better under offensive coordinator Norv Turner, and Carolina’s balanced offense features the NFL’s No. 4 rushing attack.

LIONS (-3) over Seahawks: Detroit has the league’s second-best ATS record (5-1) behind Kansas City (7-0) and dispatched the Packers and Patriots in its last two home games. The Lions finally have a solid ground game (248 rushing yards vs. Miami) to complement QB Matthew Stafford and are averaging 26.2 points. The home team is 4-1 ATS in the last five meetings.

BENGALS (-3½) over Buccaneers: The look-ahead line on this game was 6 before Cincinnati’s ugly 45-10 loss Sunday night to the Chiefs. We’ll buy low on the Bengals, who are eager to redeem themselves at home behind QB Andy Dalton and WR A.J. Green against the NFL’s worst defense.

Last week: 1-4 against the spread