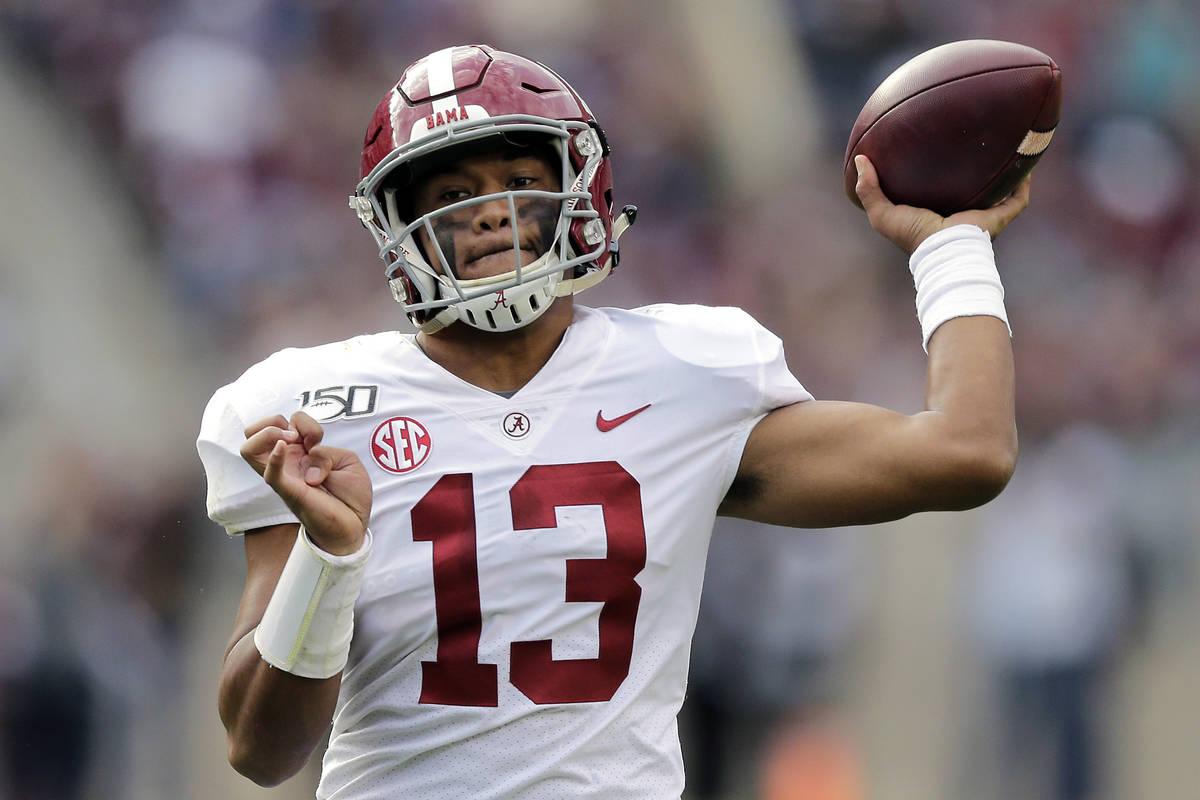 Before last season, Tua Tagovailoa was the odds-on favorite at Las Vegas sportsbooks to be the No. 1 pick in Thursday’s NFL draft.

Heisman Trophy winner Joe Burrow supplanted him as the top choice after he authored one of the best seasons in college football history and the Alabama quarterback suffered a dislocated hip.

But Tagovailoa was still widely projected to be the second QB picked. Until now. Amid reports that he failed at least one physical and had the lowest Wonderlic score among QB prospects, Tua’s draft stock has dropped dramatically in recent days at Las Vegas books.

He’s suddenly the -130 favorite at William Hill to be the third QB drafted after opening at 7-1. Bettors at William Hill also have pounded the over on his draft position of 3½, pushing the price to -400.

“Before his injury, people thought he would be a superstar. Now, is he damaged goods?” William Hill sportsbook director Nick Bogdanovich said. “It just depends on what the bettors believe and who they’re listening to.

“On draft day, someone might trade with the Lions at (No.) 3 and draft him there. You never know. All it takes is one team to really, really love him.”

In a player-to-be-drafted-first prop at William Hill, Tua remains a -130 favorite over Oregon QB Justin Herbert (+110).

At Circa Sports, Herbert and Tua have the same draft position of 5½. Herbert was a slight favorite to be picked before Tua before money came in Saturday on the Hawaiian to go under 5½ (-115).

“The sharpest plays have been anti-Tua from a few days ago,” Circa sportsbook manager Chris Bennett said Saturday afternoon. “The market was 3½, -110. Now it’s just gone nuts. Almost every bet we’ve taken the last several days on Tua has been against him.

“There’s all this negativity and skepticism regarding Tua’s injuries and his ability to stay healthy as an NFL player.”

“I know the injury’s there, but look at his body of work. Last year, we were talking about how many teams were tanking for Tua,” he said. “I truly believe Tua will be the second quarterback off the board, and I think he goes No. 3. The Lions will trade out of that spot to the Dolphins or Chargers, and I make the Chargers the favorite for Tua at 3.

“The Chargers are in a new stadium competing for fans with the Rams. They need a star quarterback to sell tickets , and Tua makes that huge splash.”

Notable line moves at Circa include over 5½ wide receivers drafted in the first round from -110 to -190 and Oklahoma QB Jalen Hurts’ draft position from 78½ to 62½.

Betting on draft props involving specific players is scheduled to close at 5 p.m. Wednesday, or 24 hours before the draft begins, per Nevada Gaming Control Board regulations.