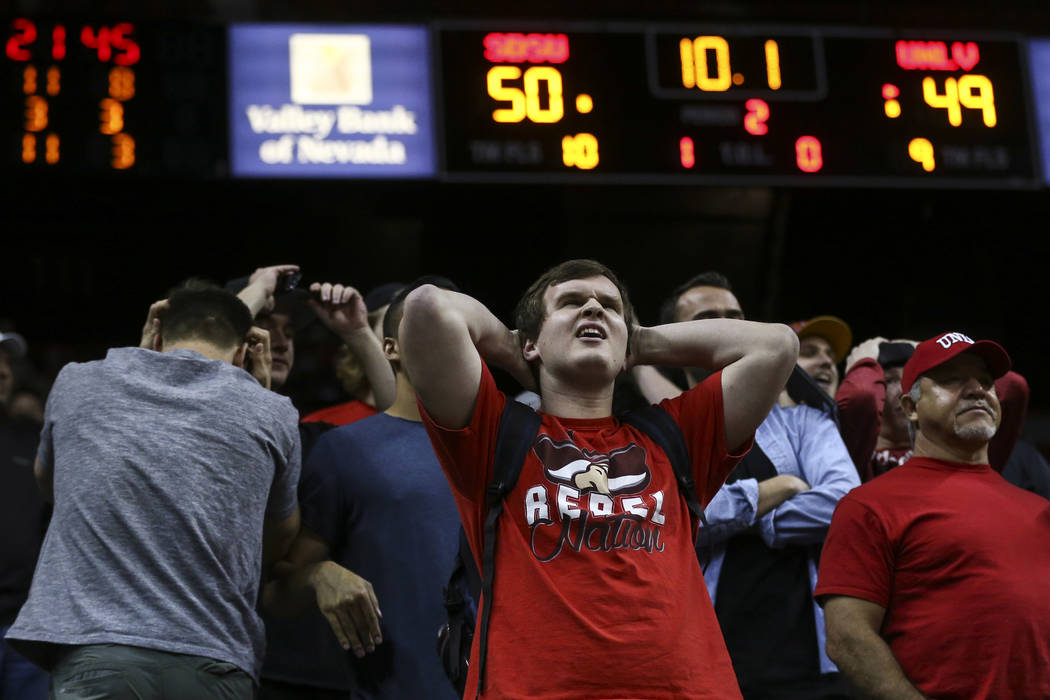 UNLV fans react as the team begins to trail San Diego State in the final moments of the second half during a Mountain West Conference tournament basketball game at the Thomas & Mack Center in Las Vegas on Wednesday, March 8, 2017. San Diego State defeated UNLV 62-52 in overtime.(Chase Stevens/Las Vegas Review-Journal) @csstevensphoto

Depending on which side bettors were on, it was either a miracle cover or a bad beat of epic proportions.

In a fitting end to UNLV’s worst men’s basketball season, the Rebels not only blew an 18-point halftime lead over San Diego State — which opened as an 8½-point favorite — but also failed to cover the spread for most backers Wednesday after getting outscored 12-2 in overtime en route to a 62-52 loss in a Mountain West tournament first-round game at the Thomas & Mack Center.

Money on the Aztecs pushed the line to 10 at most Las Vegas sports books by game time, and it climbed to 10½ at several spots.

“If you had the Rebels plus 9½, it’s one of the worst beats in the history of gambling,” William Hill sports book director Nick Bogdanovich said. “If you had San Diego State at any price, or even got 10 points for a push, you’re one of the luckiest human beings on the face of the planet.

San Diego State, which outscored UNLV 48-20 in the second half and overtime, scored the first 12 points of overtime to go ahead 62-50 before Zion Morgan scored on a layup with nine seconds left for the final margin.

“It’s a microcosm of the Rebels season. It’s ridiculous,” Bogdanovich said. “To cover after being down 18 at halftime in a game that landed in the 50s is almost mathematically impossible. You have to land exactly on a tie to go to overtime to get a chance to cover in overtime. It’s unheard of.

The Aztecs went ahead 50-46 with 3:37 left in regulation. Trailing 50-49 with 10 seconds left, UNLV’s Christian Jones went to the line but missed the first free throw before hitting the second. San Diego State’s Malik Pope then missed a jumper with one second left to send the game into overtime.

At that point, South Point oddsmaker Jimmy Vaccaro had a bad feeling.

“When it went to overtime, Jimmy walked into the office shaking his head,” South Point sports book director Chris Andrews said. “We needed UNLV. I don’t want to say we were counting our money, but it certainly looked pretty good.

“San Diego State definitely was the play. That’s where we got money, all throughout the game.”

Trailing 34-18 at halftime, the Aztecs were 10½-point favorites in the second half.

“Most of the action was on the second half,” CG Technology sports book director Jason Simbal said. “We had way more action on San Diego State.”

Simbal said the late layup by UNLV actually helped his book, where the line closed at 10½.

“Most of the action we took was on San Diego State at 8½,” he said. “We took a handful of bets on them at 10½, so falling 10 was probably the second-worst outcome. Eleven or more would’ve been the worst.

“I can’t believe we lost that game.”